The season always feels a little better after a sweep. Even if it's only a two game series, getting out of a city without a loss always puts a hitch in your giddy-up. Doing it against a division opponent, especially one that's had your number lately, is fantastic, and though the wins weren't the prettiest, I'm almost positive nobody will complain.

Now, we come back home for a four-game with...wait...we gotta play the Twins again? Didn't we just get done with an annoying team? We gotta play ANOTHER annoying team? I really don't want to sit through four hours of Scott Diamond turning into Johan Santana and #annoyinglongatbats and getting no run support for a gem of a pitching performance.

Last season, we had a winning record against every team in our division except for the Indians. Did it feel like it? It didn't feel like it. It never does. Even with the Twins coming in on an 8 game losing streak, I'd rather see the Rays or the Mariners (yes, even the Mariners) than the Twins. What I'm saying is, you're gonna need a beer for this series. Given the Twins propensity for making a game take a while, you might need two or three each game.

Luckily, Founders Brewing Company has the beer for you. Hidden among their stalwarts Centennial IPA and Red's Rye is one of the finest beers made in the country: Kentucky Breakfast Stout. 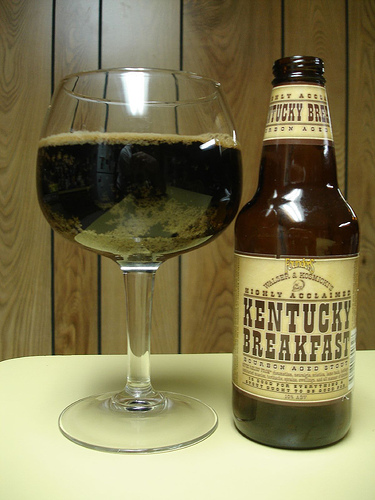 The Founders Breakfast Stout is one of the best stouts you can find that's rather prevalent in good bars around the state. Now take that beer and age it in fine bourbon barrels for a year, and you get a smooth, mellow, rich vanilla tinge added to the flavor profile. Made with roasted Sumatra and Java beans and oats, the KBS blows you away with a rich coffee flavor with notes of cinnamon and nutmeg, followed by the bourbon and a deep, strong chocolate profile. The collection of flavors is plentiful and perfectly balanced. At 11.2% ABV and 70 IBU, it is a fantastic sipping beer with dessert.

The Founders Brewing Company is located in Grand Rapids, MI.