Someone stop Jim Leyland before he bunts again!

Jim Leyland isn't known for his mastery of baseball strategy. There were two late-game moves in the 7-6 victory over the Twins which showed why, leaving him wide open to second guessing.

First was an oddly timed pinch runner in the seventh inning.

When Victor Martinez singled, he was not replaced by a pinch runner. The next batter, Jhonny Peralta, doubled. The slow-of-foot Martinez was held up at third. Would a faster pinch runner have scored? Maybe, maybe not. (Probably not). But only at that point did Jim Leyland call on Don Kelly to pinch run.

Why not make the move for a pinch runner when Martinez was at first base? Kelly would have had a far better chance of scoring on an extra base hit than Martinez. Replacing Martinez on the base paths made sense, but waiting until he reached third base doesn't.

It became moot, as Kelly would spend the rest of the inning standing at third as the Tigers couldn't get a ball out of the infield. Regardless, the entire scenario made no sense whatsoever.

Second was an eighth-inning bunt which took the bat out of Miguel Cabrera's hands.

The Tigers were tied with the Twins at 6-6. Omar Infante was on first with a lead-off single, with Torii Hunter at the plate and Cabrera on deck.

Rather than hit away or call a hit and run, Leyland went with the sacrifice bunt. He did so knowing Hunter was hitting .318 and (as we saw not long ago) not a very good bunter, and it was giving away an out. More importantly, a successful bunt would leave first base open, taking the bat right out of Cabrera's hands. It was a certainty Twins manager Ron Gardenhire would then intentionally walk him.

The next move had been well telegraphed. First base now open, Gardenhire gave Cabrera a no-brainer free pass. Leyland had given away an out and kept Cabrera's difference-making bat from making a difference. Hell, you could argue taking the bat out of Hunter's hands wasn't a smart decision as well.

Luckily, Prince Fielder's RBI single made Leyland look like, well, not a genius ... let's just say it bailed him out..

In the post game, Leyland all but admitted knew what would happen, calling the bunt a gamble by using the term, "I rolled the dice."

After calling out Leyland, let's be equal opportunity second-guessers and call out Gardenhire. If I'm a Twins fan, I'm asking why Gardenhire didn't walk both Cabrera AND Fielder in the eighth with Kelly due up in the five hole and a runner on second? I like my chances far more against either Kelly or Johnny Peralta than Fielder. Walk the professional hitter and take your chances with a player who can't get his average over the Mendoza line.

This being the Tigers, some things never change. Double plays aren't their specialty.

Porcello gets inning-ending DP to conclude the first, No. 35 on the season turned by #Tigers. Came into day tied for least in #MLB

Rod Allen quote of the night, blurted out after Miguel Cabrera launched a first-inning home run:

That makes four consecutive games with a home run for Cabrera, tying the longest streak of his illustrious career. He's now 99th on MLB's all-time home run list with 335, tied with Darryl Strawberry.

Max Scherzer amused himself by throwing chips at FSD's Shannon Hogan. (Click the pic for Scherzer throwing brush back chips)

This ridiculous chyron fail turned up in the Royals' broadcast tonight. The Tigers traded for Bryce "Hunter?" 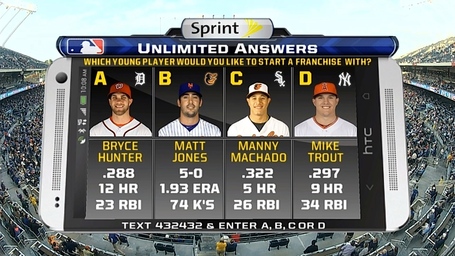 Josh Willingham has eight home runs on the season. Four have come against the Tigers. Just what we need, another Tiger Killer on the Twins.

Odd stat of the night: in his last four games, Prince Fielder is 5-for-5 with seven RBIs after Cabrera walks. Tonight it was RBI singles in the seventh and eighth innings.

The Detroit Red Wings took a 3-1 series lead over the heavily favored Chicago Blackhawks the NHL playoffs tonight. The Wings wrapped up a 2-0 victory which ended as the Tigers were attempting to rally in the seventh inning. The good vibes must have drifted over from Joe Louis Arena, as the Tigers immediately proceeded to score three runs to tie the game, and would go on to win. A great night in downtown Detroit.

Miguel Cabrera: I may just as well leave Cabrera's name permanently under ROARS. He's hitting .391 and is on pace for 198 RBIs on the season.

Omar Infante: Filling in at the lead-off spot, Infante had another nice game at the plate with three singles.

Prince Fielder: Got off to a slow start, leaving the bases loaded in the fifth. But he killed the Twins when they walked Cabrera in late innings, driving in runs both times, including the game winner.

Rick Porcello: Porcello had his worst start since the Anaheim debacle, giving up ten hits and five runs in five innings. He is what he is, and what he is is a fifth starter. Fifth starters will frustrate you to no end with games like this.

GAME 44 PLAYER OF THE GAME: