A beyond-dominant Anibal Sanchez just missed the second no-hitter of his career, Joe Mauer breaking up the no-hit bid with a ninth-inning single. Sanchez would end up with a one-hitter, walking three and striking out an even dozen in a 6-0 victory over the Minnesota Twins.

With one out in the ninth inning, Joe Mauer broke up Anibal Sanchez's no-hit bid with a clean single to center as the Detroit Tigers hammered the Minnesota Twins 6-0.

Sanchez was a mere two outs away from the second no-no of his career, no-hitting the Diamondbacks on September 6, 2006 as a Marlins rookie. Sanchez would settle for the fourth one-hitter of his career.

Sanchez (5-4) ended up with a one-hit shutout, striking out 12, allowing only one base runner to reach second base, while throwing a career-high 130 pitches.

Making his first start of the season for the Twins, losing pitcher Samuel Deduno (0-1) allowed all six runs and nine hits in 5 1/3 innings.

As if Tigers fans didn't need another reason to hate the Twins. You can add Mauer's break up of Sanchez's no-no on top of the 1987 playoffs, countless ridiculous losses at the Hell on Earth known as the Metrodome, and of course, game 163.

But before all the late-inning dramatics, the game started innocuously enough...

The Tigers threatened in the first inning, but the lack of a two-out hit with runners in scoring position doomed the inning.

Still swinging the bat well, Dirks led off with a single to right. Infante grounded into fielder's choice. After Cabrera SHOCKINGLY flew out to right (even the Mighty Cabrera can't reach base all the time), Prince Fielder worked a two-out walk, Infante to second. But Victor Martinez grounded out 5-3 to end the threat.

In the top of the second inning, the Twins were very un-Twins like, making a couple of mental mistakes on defense which allowed the Tigers to take the lead with a two-out rally.

The white-hot Jhonny Peralta gave the Twins a taste of their own medicine, blooping a Twins Hit single in shallow right. One down, Kelly grounded into fielder's choice on what could have been a double-play ball. Justin Morneau made a backhand stop and fired to second to nail Peralta. But no one covered first base, Deduno taking his sweet time getting to the bag, allowing Kelly to easily beat the throw.

Avilsail Garcia followed with another Twins Hit, an infield single which rolled under the glove of Deduno (it looked as if he should have made the play). Then we saw Garcia's amazing speed, beating out what should have been a inning ending 6-4 fielder's choice ground ball off the bat of Dirks. Garcia hustled to second, beating the backhand toss in a bang-bang play, Dirks credited with a single, which loaded the bases.

Deduno buried himself even deeper, issuing an RBI walk to Infante to make it 1-0 Tigers. Big mistake, considering who was on deck.

In his second at-bat against Deduno, Cabrera was not going to be denied. He yanked a hard ground ball inside the third base bag past a diving Jamey Carroll, driving in two to increase the Tigers' lead to 3-0. (MLB.com video)

Deduno would walk Fielder before Martinez bounced into a fielder's choice (this one the Twins didn't blow) to end the two-out rally. Deduno needed 44 (!!!) pitches to get out of the inning, allowing three runs on four hits, two walks and three mental errors.

Given a three-run cushion, Sanchez was mowing down Twins, having allowed just two walks in three innings, no one having hit a ball hard.

Anibal Sanchez has us drawing cards after three innings. Only 18 outs away from Justin Verlander.

Yeah, it's a few innings early. But it's one of those nights. Sanchez zero hits thru 3. Working against a lot of bad Twins batting averages.

Bottom of three and Peralta on base after a single, Kelly made it a five run cushion. His fly ball to deep right just cleared both the yellow line on the right-field wall and Chris Parmelee's glove (mis-timing his leap, otherwise Parmelee would have made the catch of the season) for a two-run homer. Donnie Baseball's second big fly of 2013 made it a 5-0 game. (MLB.com video)

Meanwhile, Sanchez was even better in the fourth. He struck out the side, giving him four straight and five total. The no-no watch was officially on.

DID YOU KNOW: No Tigers pitcher has ever had a 17-strikeout game and a no-hitter in the same season.

Channeling his inner Max Scherzer (and his 22 consecutive out game), Sanchez rolled through the fifth. Another 1-2-3 inning in the books, Sanchez had retired 11 straight, his pitch count at 71.

While Sanchez alerts were going up all over the internet and media after five innings, Deduno was on a roll of his own, setting down eight straight Tigers after Kelly's home run.

Sanchez's out streak hit 14 straight after striking out Joe Mauer (K number eight) on a full count to end the top of the sixth. He was nine outs away from his second career no-hitter.

After a two-inning slumber, the Tigers knocked Deduno out of the game in the sixth with consecutive one-out singles from Garcia and Dirks. Facing right-handed reliever Ryan Pressly with a runner in scoring position, Infante continued to rake, lining an RBI single to left. Garcia jogged home to push the Tigers' lead to 6-0.

Morneau nearly ended Sanchez's no-hit bid in the seventh with the hardest-hit Twins ball of the night. He lashed a one-out line drive back up the middle, but straight at a perfectly positioned Peralta. The out streak reached 17 straight after Cabrera was able to corral Oswaldo Arcia's foul pop.

Sanchez had yet to allow a hit through seven, his pitch count at 99. The no-hitter alerts went into overdrive, as did the "no-jinxes" people who railed at reporters relaying NEWS.

Leading off the eighth was Parmelee. Sanchez broke his bat, Peralta catching the resulting looper in short left center. Five outs to go.

Arcia walked on four pitches, Sanchez out streak ending at 18 Twins. Arcia was the first base runner Sanchez allowed since Parmelee took a free pass in the second. Five outs were still needed.

Pulling out the stops in an attempt to avoid the inevitable, Twins manager Ron Gardenhire reached into his bag of tricks for another pinch hitter. Chris Colabello batted for Doumit. He was punched out looking to end the inning on Sanchez's 114th pitch, strikeout victim number nine.

At this point, all anyone cared about was Sanchez's no-hit bid, but the Tigers still needed to bat in the eighth. They didn't make anyone wait for the ninth-inning drama, as Twins reliever Caleb Thielbar retired the Tigers in order.

Thru 8 after Colabello takes 3rd strike at the belt. Sanchez will face top of Twins order -- Carroll, Mauer, Willingham -- in 9th.

Sanchez left the dugout to a standing ovation. There would be no defensive changes for the Tigers. Cabrera and Fielder remained on the infield corners, Peralta at short, Kelly in center. Run what ya brung, as they say.

The first Twin to bat was Carroll. Sanchez punched him out looking on a 1-2 inside fastball. It was K number ten, two outs to go.

Mauer hit a liner back through the box over Sanchez, a hard, clean single to center. Mauer ended Sanchez's no-hit bid after 8 1/3 innings. A visibly disappointed Sanchez slapped his glove in disgust as the 39K in attendance groaned at Sanchez nearly making history.

A shutout still on the line, Sanchez, quickly dispatched Josh Willingham and Morneau, ending the game by striking out the side.

GAME OVER, but damn, damn, damn. What a brilliant near miss by Sanchez. Just another reason to despise the Twins. NEVER FORGET.

After the game, Sanchez was happy, with the result (who wouldn't be?), yet he realized just what Mauer had taken away from him during a post-game interview.

"I tried to make my best pitch, but Mauer is one of the best hitters in the league."

You can't ask for more than that.

Jim Leyland gave props to both Sanchez and Mauer.

"When you pitch a one hitter and the one hit you give up is to a guy with three batting titles, that's one hell of a performance." -Leyland

One Hell of a performance, indeed.

Behind Sanchez's right arm, the Tigers raise their record to 27-19. With the Indians losing to the Red Sox, the Tigers end the night all alone in first place in the AL Central, 1/2 game up on the Tribe.

The last-place Twins lose their tenth game in row, falling to 18-27, eight back of the Tigers.

In game three of the weekend series, for the second straight game a Twins starter will be making his first appearance of the 2013 season. The Twins have called up right-hander P.J. Walters (2-5, 5.69 in 12 starts in 2012) from Triple-A Rochester to face the Tigers. Doug Fister (5-1, 3.62 ERA) take on the Twinkies, looking to bounce back from a 4 1/3 inning no-decision in Texas.

First pitch is 4:08 PM. Despite the odd start time, Saturday's game is not in the national FOX Saturday Baseball window, so it will be available in the usual places.

FYI, the team will honor the 1968 World Champions in a pregame ceremony starting at 3:40. Gates open at 2.

Michigan weather in late May is Michigan-like:

Anibal Sanchez allowed two walks in his first two innings, which equaled his season high. But he had yet to allow a hit, either. His stuff was electric.

Through 1.2 IP, Anibal Sanchez has matched his highest walk total from any of his last six starts. He's only got 16 on the season, 2 tonight

Cabrera also punishes two-strike fastballs to the point of putting up video game-like numbers, shown by your FSD stat of the night: 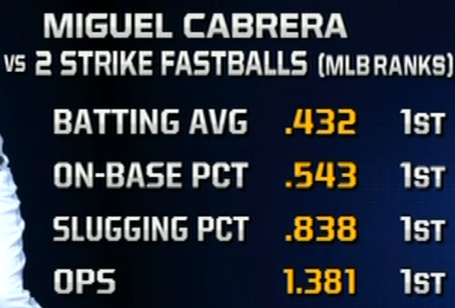 In case you didn't know, Don Kelly is exceedingly polite.

Don Kelly hits a home run, leaves his cart in the store and just carries his groceries to the car by hand. (via @craiggrossom) #donniedeeds

At the game. Kelly brought me my beer after his HR.

Don Kelly, aka The Wizard, Don-bot, Donnie Baseball, was trending on Twitter!

The pitch-count hawks are always hovering...

Worth noting the high level prospect the Tigers traded for Sanchez is 3-4, 4.47.

If there was one Twin you did NOT want to see come to plate in the ninth, it was Joe Mauer.

This is the 3rd time in his career that Joe Mauer has broken up a no-hitter in 9th inning.

DAMMIT. DAMMIT ALL TO HELL.

Miguel Cabrera: Like I said before, Miggy is in ROARS permanently.

Don Kelly: Two-run homer was icing on the cake.

Alex Avila behind the plate: The backstop calling a near-miss no-hitter deserves props.

Joe Mauer: At least it was a clean single.

GAME 45 PLAYER OF THE GAME:

Miguel Cabrera reached base four times on two walks, an RBI single and a two-run home run, BYB readers giving Miggy the PotG nod with 69% of the vote.