With the Houston Astros joining the American League this season, there are now 15 teams in each league, ensuring a constant interleague series. Major League Baseball decided to turn this week into Rivalry Week, however, so every team is playing either its natural rival (Yankees-Mets, Cubs-White Sox, Marlins-Rays, etc), or its MLB-Assigned rival. Unless you consider the 2008 and 2009 Stanley Cup Finals or Jim Leyland the impetus of a rivalry, Tigers-Pirates certainly falls into the latter category.

We all know that Pittsburgh has been terrible for years. They haven't made the playoffs since 1992. They haven't had a winning season since then, either. The franchise famously turned when they chose to hang onto Andy Van Slyke over Barry Bonds. When the best thing that has happened to your team in 21 years is a new ballpark, it's time to sacrifice a chicken or something for the cause.

Things have been turning up lately, though. They have increased their win total the last two seasons and have a bona fide superstar in Andrew McCutchen. They also have an automatic closer in...Jason Grilli? The same Jason Grilli that had a 4.31 ERA for the Tigers? Wow, you're funny. Next thing, you're gonna tell me that Fernando Rodney became an award-winning closer or something.

Pittsburgh moved their farm team to Indianapolis in 2005. This seems like the perfect time to dovetail in the rule for Interleague Beer of the Series posts. Without further ado, I present to you the Sun King Indians Victory Lager. 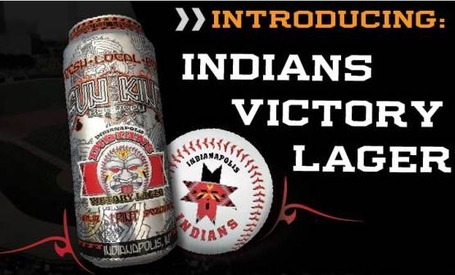 Sun King began an association in 2011 with the Indians to design a beer to be the official brew of the team. The first beer (1887 Lager, commemorating the 125th anniversary of professional baseball in Indianapolis) was a one-off, but became a solid predecessor to the Victory Lager (with apologies to George Orwell, "Victory Lager" is not tasteless, mind control juice). The purpose of the Victory Lager is to be a fantastic, tasty beer that you can have two or three of at the game, but still enjoy the taste and flavor of; palate fatigue was considered. A crisp, hoppy flavor briefly greets you, then gives way to a pleasant, smooth caramel malty finish. Not too complicated, just a pleasant beer that pairs wonderfully with brats and baseball, and at 5.2% ABV and 24 IBUs, you'll want to come back for another.

Sun King Brewery is located in Indianapolis, IN.