The Detroit Tigers make their annual pilgrimage to Baltimore, land of half the B&O Railroad from Monopoly, a ballpark with a warehouse, and blue crab. SOOOOOOOOOO much blue crab.

Whoever invented the blue crab, you did a hell of a job. The blue crab is a top 5 food in the world. Blue crab ravioli, crab cakes, and crab stuffed mushrooms are all fantastic ways to enjoy this aquatic delicacy, or you can just kill it, shell it, throw it on some white bread, and eat it steamed, which tastes wonderful.

Oh yeah, this is a baseball blog, and I write about beer. Anyway...

The Orioles were terrible for a while. Then they got a new manager known for leaving teams after rebuilding them, but a year before they do big things (See: 1996 Yankees, 2001 Diamondbacks). So, when Cal Ripken, Jr. takes over the Orioles the year after the Buck Truck is canned, you can just print the World Series T-shirts.

This is the second trip to the DelMarVa area this season. While Washington undoubtedly had the better team last season, they trail their northern rivals on the beer front, in my opinion. Perhaps it has something to do with that legislation suspending brewing in D.C. for 55 years, but Baltimore certainly takes the cake with the beer front (and thanks to Duff Goldman, the cake front as well). Several great choices exist, but there really is only one right answer. Ladies and Gentlemen, I give you the Clipper City Heavy Seas Loose Cannon Triple-Hopped IPA. 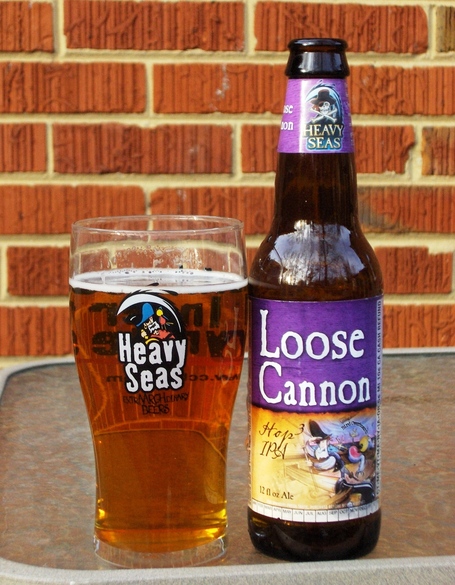 In Loose Cannon, you're getting a beer you can smell from miles away. By hopping it in the boil, the fermenter, and the hopback in between these two steps, you're imparting a wonderfully citrusy floral character upon your beer as well as a deep golden hue and creamy head to admire in your glass. Caramel and Munich malts temper the extreme hoppiness, adding drinkability, smoothness, and breadth to the palate. The grapefruit finish pairs beautifully with one of Boog Powell's BBQ sandwiches and a cup of applesauce. At 7.25% ABV and 45 IBUs, you'll enjoy one of these at the beginning of the game, then one once the bullpen comes along.

The Clipper City Brewing Company is located in Baltimore, MD.

A few other great Chesapeake/DelMarVa brews: