For one ninth inning, game winning at bat, he wasn't "Slumping Alex Avila."

Share All sharing options for: Quick thoughts: Alex Avila surprises us all

I had a post-mortem all set to go, roasting the Tigers for their inability to do anything offensively against the Astros in what was going to be a 3-2 loss.

A big culprit was Alex Avila, who looked lost at the plate once again. He went down meekly in his first three at bats. The only positive Avila accomplished with the bat was moving a runner from second to third on a ground ball. It was the story of his season.

Then Don Kelly walked, Avila went yard, Tigers win 4-3, the world was back correctly spinning on its axis, and the recap went into the trash can.

All thanks to Alex Avila.

It's not as if Avila hasn't hit huge, late game home runs for the Tigers in the past. But I'm not sure there has been a more unexpected one, being Avila entered the game hitting .176 with a mere 13 hits. But we tend to forget the power is still there, shown by three home runs.

Make it four with Avila's biggest hit of what is still a young season.

A solid defensive catcher who can produce on offense is a weapon hard to find in today's game. The Tigers need a productive Avila behind the plate. The Avila with 15-20 home run power and a .350 on base percentage, not outrageous numbers with his track record.

If tonight is the start of a turnaround to what's been a pretty damn miserable season, this might have been the most important home run of Avila's career.

Only time will tell. But for one at bat, Avila we all expected was back. I hope he's here to stay.

As for the storyline coming into the game?

The streak is over. The number of games with ten strikeouts or more ends at seven, an American League record. The Tigers' pitching staff end up four strikeouts short of tying the Milwaukee Brewers' MLB record of eight games, set in 2012.

But does anyone really care? Should we care? Strikeouts no longer carry the sigma they did decades previous. In today's K-happy, swing for the fences game, I would not at all be surprised to see the Tigers make another run at the MLB record.

In the end, the strikeout streak is as meaningless a record as Justin Verlander's six inning start streak. Nice to have, but doesn't really mean a thing.

Another big crowd at Minute Maid Field. Looks like Comerica Park circa 2003.

Given the night off was Austin Jackson, who had started every game this season. Andy Dirks was inserted at lead off. Don Kelly, aka Donnie Baseball got the start in center, Jim Leyland saying:

"I like to stir the fans up now and then," Leyland said with a smile. I'll play Kelly again."

Proof Leyland listens to the angry callers on sports talk radio and enjoys driving them crazy.

Word was Jim Leyland wanted to get through the night with just Doug Fister, Drew Smyly, Jose Valverde and Al Alburquerque. He only needed three, Al-Al not seeing action.

Rob kept them coming in the game thread:

After having an annoying game one (reaching base three times), Robbie Grossman continued on his quest to become the new Nick Punto in game two. Victor Matrtinez hit a 420+ foot bomb to dead center in the secind inning, Grossman taking a Quinitin Berry-esque route, but recovering to make a nice running catch to rob Martinez of extra bases.Punto Grossman would reach base in the third by not moving on Doug Fister's pitch in the dirt, catching him on the back foot for an annoying HBP.

All Victor Martinez could do was smile a sad smile after what looked to be a two run home run was ruled an RBI single. Then again, who could tell? Apparently FSD didn't use the money they saved by firing Larry Murphy on better camera work. The video looked to have been recorded by a potato going by the low quality of FSD's single replay angle. 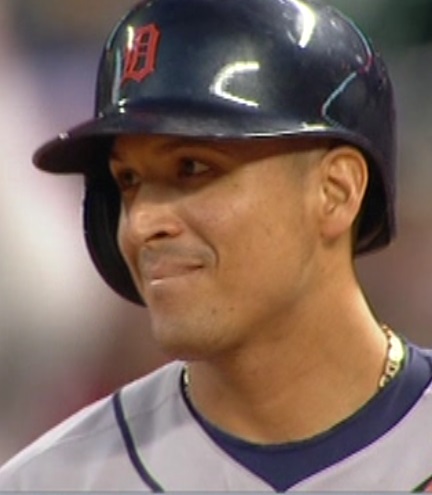 Ridiculous (ly good) FSD stat of the night: Two out and runners in scoring position, Miguel Cabrera is hitting .615, with two home runs and twelve RBI.

Carlos Pena shows how to beat the shift. Bunt it where they ain't.

The smart play didn't pay off, Fister getting out of the inning on a 5-4-3 double play. 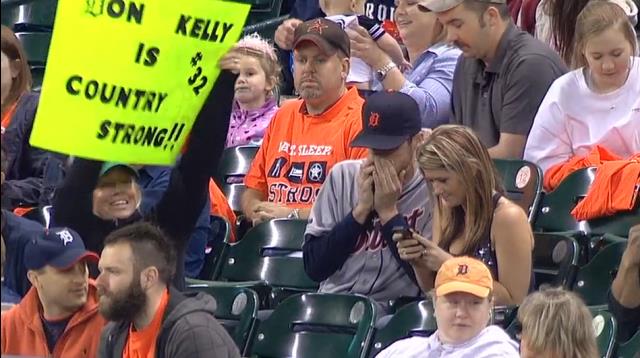 How quiet was the night offensively for the Tigers until the ninth? Their official Twitter account didn't tweet a single video highlight during the game, something they nearly always do ... when they have something worth showing, that is.

I'll use Kurt's reaction to Alex Avila's two run shot in the ninth to represent the Tigers fans base:

Alex Avila to the sport talk radio types calling for Brayan Pena to start (yes, they are out there):

Life of a recapper:

I also forgot a word.

Alex Avila: For one at bat, Avila made everyone forget about his season long slump. Could his ninth inning big fly be the at bat which breaks it? The Tigers badly need his bat and normally high on base percentage.

Drew Smyly: Six up, six down, gets the win.

Don Kelly: Donnie Baseball is on a roll. Reached base twice, stole a base, scored twice, walked to start the ninth inning rally, caught the final out.

Prince Fielder: Reached base three times in four at bats, all walks.

Jose Valverde: That was the Big Potato we all remember. But a save is a save and he's now three for three.

Doug Fister in the seventh: Fister was on cruise control entering the seventh inning, tossing a six hit shutout. Four Astros later, he was on the hook for what would have been his first loss, only to be bailed out by Smyly and Avila..

Tigers offense: Only six hits tonight. Going into the series, you would have expected the Tigers' talented bats to light up Astros' pitching. Hasn't happened. They have needed rallies in the fourteenth and ninth innings the last two games to knock off the the suddenly effective Astros' staff.

GAME 27 PLAYER OF THE GAME:

The collective known as "The bullpen" (and their seven innings of one hit, shutout ball) narrowly beat Don Kelly (two hits, game winning RBI) 48% to 46%.