The Tigers continue their journey through the NL East in Interleague play with a trip to our nation's capital. The Washington Nationals are a team flush with taxpayer money, jersey misspellings (Natinals, anyone?), owner money (they somehow feature the second-richest owner in baseball), and fans that like clever digs at Colonial British policy on their license plates. That being said, you can't suck forever, and as the Tampa Bay Rays proved, having high draft picks for a long enough period of time means you get good players that can make an impact early on.

Stephen Strasburg and Bryce Harper are two of the most exciting players in the game, turning the Nats into title contenders last season along with power arms Gio Gonzalez and Jordan Zimmermann, slugger Jayson Werth, and the slick fielding of Ian Desmond, bringing them within a game of the NLCS as the top seed in the National League. They've retooled a little bit this season and are off to a slow start, but will still be dangerous for the streaking Tigers, but we all know we're just watching the game to see if Teddy wins the Presidents race.

Just like the Nationals, Washington, D.C. has had a rather convoluted beer history, from James Madison once attempting to appoint a Secretary of Beer (Something that needs to be addressed: why has this not gotten more press? I would vote for whomever decides that this position needs to exist. Form a national brewery and appoint a Secretary of Beer? That would bring more people in this country together than cutting the deficit and fixing unemployment COMBINED!) to D.C. going dry two full years before Prohibition to a 55 year package beer drought in the city finally ending in 2011 (uniquely coinciding with the Nationals getting good, hmm...). This means that the craft beer scene in the city is less than thriving compared to the other Beltway team (we'll get to them at the end of the month), but is starting to build back up. While distribution is still lacking, a trip out east offers you the chance to find some good stuff, but the highlight for this series is the Tartan Ale from Port City Brewing Company. 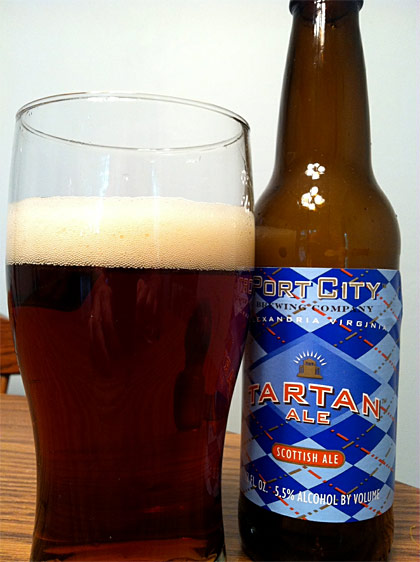 Scottish Ales are great, flavorful beers for your "transitional" beer drinker (a massive upgrade for someone who is typically used to drinking the Macro Lights of the world) because they are not so overwhelming that they will be undrinkable, but still feature a smooth enough palate where the flavors are distinct. The smokiness of the caramel malt is distinct in this brew, imparting a "campfire" aroma to the beer. It starts off nice and mellow before the smooth, smoky malt flavors collide in your mouth. The slightly sweet, fruity aftertaste is a sign to come back for another sip, and pairs rather well with a nice greasy order of fish and chips. At 5.5% ABV and 24 IBUs, this will definitely be a beer you want to have a few of during the game.

A few other D.C. area beers to try out: