The best players on the Nationals beat the Tigers' best players. That happens sometimes. National League style baseball, on the other hand...

Share All sharing options for: Quick thoughts: Managing by the NL book

How to explain the Tigers losing to the Nationals?

Jordan Zimmerman out pitched Anibal Sanchez. Zimmerman was pounding the strike zone all night long. He had 16-of-19 first pitch strikes at one point.

Aces win games, and Zimmerman is becoming an ace. Most nights Sanchez pitched more than well enough to win. This wasn't one of them.

Bryce Harper homered and had a pair of RBIs, showing why he's on his way to becoming the next Big Thing in baseball. Miguel Cabrera and Prince Fielder had relatively quiet nights, combining for two hits and an RBI.

The Tigers are going to lose occasionally, and the Nationals are a very good team. So the loss didn't irritate me. But something else did.

What irritates me is in interleague play American League teams are forced to use lineups minus one of their most productive bats. In this series, Victor Martinez has been reduced to a late innings pinch hitter.

Honestly, I'm not a fan of NL style baseball. Never have been, never will be. It's irritating!

Before anyone goes off on the National League being the real game, having superior strategy, making it more difficult and interesting? Jim Leyland, who should know from managing in both leagues, disagrees:

Jim Leyland has said before that managing in the NL is easier, because pitching moves are usually dictated to you by the situation. #Tigers

Exactly. NL managing is strictly by the book, more so than managing in the AL. Amongst other things, no there's no set time to pull your pitcher, use a pinch hitter, or when to lay down a (UGH) bunt in the AL. But in the NL?

Every NL manager makes the same moves at the same time in every NL game. Yes, there are outliers, but for the most part, the NL managerial book is a strict one.

You are now the next Tony La Russa, ready to manage in the National League.

After yesterday's fiasco of a postponement (they played a full game in Baltimore, yet called the game in DC), it looked like there might be a legit one tonight. After a 57 minute rain delay, the Tigers and Nationals finally took the field.

What I imagine Prince Fielder was thinking tonight: "It's a hundred and six miles to Chicago, I have a full tank of gas, half a pack of cigarettes, it's dark, and I'm wearing sunglasses." 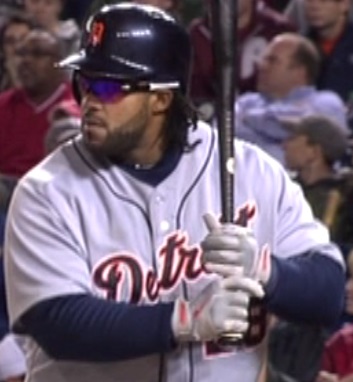 Danny Espinosa laid down a two out bunt base hit in the second inning. I agree with the opinion of the man I call the "Id of the Tigers fan base."

The Nationals have loaded the bases in the second inning! Oh, no! What will the Tige ... Wait a sec. This game is being played under National League rules. The pitcher is up next.

RT @thenissenator: And that is why we must continue our crusade until the National League is eradicated.

I know Tiger fans are happy and they should be that they got out of that inning but NL ball stinks!The automatic out gets old and boring

Anibal Sanchez led off the the third, not improving the mood of the AL baseball loving fan base.

WOW I'M SO GLAD I GOT TO SEE A TIGERS PITCHER STRIKE OUT LOOKING ON THREE PITCHES. LOVE NL BASEBALL

IF ONLY WE HAD AN EXTRA HITTER THIS INNING. OH WAIT. WE DON'T BECAUSE THE PITCHER HAD TO HIT.

For what it's worth, Rick Porcello was the last Tigers pitcher to record a hit. He singled against the Pirates on May 22, 2011. Of course, Justin Verlander is on track to retire without a base hit.

Cabrera is good stat number one:

Hate for Denard Span is a healthy hate.

They even hate Span in Norway:

the hatred for Denard Span in my feed.... I totally second everything said. I hope he sits on a cactus.

Winner of the Presidents Race was George Washington, who cheated like wrestler with an unknown object shoved in his tights. Jason Beck agreed.

Not sure what just happened in Presidents race, but I think they took a page from a Cleveland hot dog race in which ketchup cheats and wins.

Cabrera seemed to be limping after taking an uncomfortable looking swing for a 6-3 bounce out in the sixth. Even Rod and Mario noticed it. EVERYBODY PANIC!!!

But Cabrera remained in the game and it was never mentioned again. EVERYBODY CALM DOWN!!!

Confusing move of the night: Your first bat off the bench is not Victor Martinez, but Don Kelly? Hmmm.

Explanatory stat of the night:

#Tigers are 13-2 when they homer, and 6-9 when they don't. Haven't homered yet tonight, obviously.

And they wouldn't. Game over.

Anibal Sanchez: Normally Sanchez would have pitched deeper into the game, but not when you're playing NL style. Not that it would have made a difference tonight.

Jhonny Peralta: The only Tiger with more than one hit or to reach base three times.

Alex Avila: Not a good night for the Tigers' catcher, 0-for-3. Struck out twice with two out and a runner in scoring position to end scoring threats.

Omar Infante: Bottom of the order had an off night, including Infante's 0-for4 in the eight spot.

Jim Leyland: Donnie Baseball is your first bat off the bench? Really?

GAME 30 PLAYER OF THE GAME:

Justin Verlander carrying a no-hitter into the seventh inning made it a given he would be PotG. He was, with 63% of the vote.