The Detroit Tigers had scored just eight runs in their previous four games combined. They equaled that output in a four home run fourth inning, bouncing back from consecutive walk off losses to beat the Baltimore Orioles 10-3.

The beneficiary of the run support was Justin Verlander (7-4), who allowed three runs and nine hits, striking out five. The Tigers' ace has now won three straight games, righting the ship after a pair of very sub par starts.

Orioles starter and loser Jason Hammel (7-3) was victimized for three of the Tigers' home runs, allowing five runs on five hits. Hammel would end up being ejected for a retaliatory pitch, hitting Matt Tuiasosopo in the head.

J.J. Hardy led the Orioles offense with a pair of solo home runs, Nate McLouth adding a pair of hits. Chris Davis chipped in RBI number 51 of the season with a single.

Victor Martinez, Jhonny Peralta, Alex Avila, Miguel Cabrera and Prince Fielder all went yard for the Tigers. Four homers were of the solo variety, Cabrera's a grand slam to give him a league leading 65 RBIs.

Looking to recover after losing their last two games in the most painful way possible, the Tigers kicked up their heels in the second. Orioles second sacker Ryan Flaherty tried to kill the rally before it could get started, but a two out Matt Tuiasosopo single would give the Tigers the lead.

Martinez led off inning with a base on balls, Peralta singling him to second. Avila, hitting into some hard luck, drilled a one hopper up the middle. Flaherty made diving stop, flipping to second to start a 4-6-3 double play. Two down and Martinez 90 feet away, the Tigers were in need of a (rare as of late) two out RBI base hit. Tuiasosopo came through, lining a single to left, Martinez crossing the plate, the Tigers up 1-0.

Avisail Garcia walked to keep the inning alive, moving Tuiasosopo into scoring position. But a slumping Omar Infante (2-for-24) couldn't come through with a second two out hit, bouncing into a fielder's choice to end the inning.

With one swing of the bat, the Orioles tied the game in the bottom of the third. Verlander served up Hardy a 91 MPH belt high fastball, which he drilled on a line over 364 mark in left . Hardy's 11th big fly of the season knotted the game at 1-all.

Even though Verlander had allowed the home run, his command was far better than in his last few starts, needing just 31 pitches to get through three innings.

Martinez, Peralta and Avila would counter Hardy's homer with back-to-back-to-back shots of their own leading off the fourth, starting an inning which would Potato-proof the game.

The Tigers flashing some serious home run power to take a 4-1 lead, Hammel then retaliated by beaning Tuiasosopo, hitting him in the helmet with a first pitch breaking ball. Umpire Hunter Wendelstedt rushed out from behind the plate to eject Hammel, post haste.

Even though it wasn't a fastball, when you hit a batter after three straight home runs, common sense says it was in retaliation. Tuiasosopo being hit in the head makes it that much worse. Wendelstedt agreed, sending Hammel to the showers, despite his vigorously disagreeing it was a purpose pitch.

Buck Showalter forced to go to his bullpen, lefty T.J. McFarland got the call. What he would do was the equivalent of throwing rocket fuel on a four alarm fire.

Garcia greeted McFarland with a single to right. Infante broke out of his slump by doubling down the left field line, Tuiasosopo trotting home with the fourth run of the inning.

McFarland all but dug the Orioles' grave when he managed to walk Andy Dirks, loading the bases for Cabrera.He capped off the huge inning when McFarland's 88 MPH meatball couldn't have been placed on a tee any better for Cabrera, drilling a liner over the left field wall for his fourth career grand slam and 17th home run of the season. Eight straight Tigers had reached base to turn a tight 1-1 game into a 9-1 blowout.

McFarland would finally get out of the inning, retiring the next three batters after Cabrera went yard. The Tigers had batted around, sending 11 to the plate, the first eight reaching base, all of whom would score, collecting six hits, including four home runs. The eight run inning was a season high.

Once he was warned by Wendelstedt to not retaliate, Verlander didn't hit anyone but he gave back a run instead. Bottom of the fourth, a lead off walk coming back to bite him. Manny Machado walked, advanced to second on a ground ball and would score on Davis' broken bat single to right.

After the Tigers stranded Tuiasosopo after his one out double in the fifth, Verlander gave back another run in the bottom half of the inning to make a 9-3 game. Leading off, Hardy went deep for the second time, crushing Verlander's hanging curve ball over the left field fence. Home run number 12 for the Orioles' shortstop made it a 9-3 game.

McLouth would single and steal second to give the Orioles a shot at putting up a crooked number. But Velrander would rack up his fourth strikeout on the day, Machado going down swinging to end the inning.

Fielder joined the home run party with two down in the sixth. He took McFarland out to right center for a solo shot, hitting the seventh tater of the afternoon, the fifth for the Tigers and tenth of the season for Fielder. The Tigers increased their lead back to seven runs at 10-3 (MLB.com video).

The Orioles refused to go away, annoyingly getting on base. The first two batters reached in the bottom of the sixth, both Nick Markakis and Adam Jones singling down 0-2 in the count. But Verlander pitched out of trouble, striking out Davis, Matt Wieters flying out to the warning track in right and Hardy was finally retired on a can of corn to center.

Veralnder was greeted with Jim Leyland's "Handshake of doom" after seven innings. Drew Smyly would take over, getting some work in. After an uneventful eighth, Smyly got into a little trouble in the ninth, Wieters doubling and that damn Hardy reaching base again, this time via a walk.

Thankfully, there would be no miracle comebacks this afternoon. Smyly buckled down, retiring the next three Orioles in order,, striking out McLouth to end the game in fine fashion.

Your final score is Tigers 10, Orioles 3. The Tigers and their fan base getting a badly needed easy victory. Boy howdy, it was really needed!

The Tigers snap a four game losing streak while raising their record to 30-24. Detroit clings to a 1/2 game lead over the Cleveland Indians in the Central. The Orioles sit in third place in the East, two games back of the Red Sox with a 31-25 record.

Coming off the best start of his career, Rick Porcello (2-2, 5.29 ERA) takes the mound for the Tigers in the series finale. Recently called up top prospect Kevin Gausman (0-2, 11.00 ERA), a right-hander who was the number four selection in the 2012 draft, toes the slab for the Orioles. First pitch is 1:35 PM.

Miguel Cabrera is having an amazing season. His May stats were otherworldly. 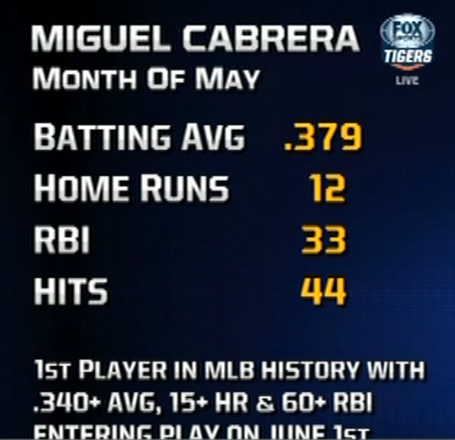 Avisail Garcia and Matt Tuiasosopo were in today's starting lineup instead of Don Kelly. Media members are feeling the same as fan are in regard to the Wizard. Jim Leyland is playing Donnie Baseball too damn much.

All Tuiasosopo does is give you quality at-bats. Needs to play over Kelly always, vs. lefties or righties.

So does Andy Dirks and for that matter, Garcia. Kelly has a role, but it's NOT as a platoon outfielder, even if it's caused by Austin Jackson's bum hamstring.

The last time the Tigers had back-to-back-to-back jacks, it was by an OF/C/1B who would be their "Well, someone off the Tigers needs be their All-Star representative" the next season, a youngster the Tigers sold the fan base as a five-tool phenom and the Donnie Baseball of his time.

God, that was an awful era of Tigers baseball.

The Tigers haven't hit four home runs in an inning since September 10, 1986, in the fifth inning of an 11-7 win over the Brewers. Going yard were Chet Lemon, Mike Heath (an inside the park homer hit to Tiger Stadium's massive center field), Kirk Gibson and Darnell Coles. Serving up the home runs were the Brew Crew's starting pitcher Chris Bosio and reliever Mark Knudson. Talk about a blast from the no longer recent past. I'm suddenly feeling very old.

More career milestones for Cabrera. They seem to be happening on a daily basis at this point.

Homer is Cabrera's 200th in a #Tigers uniform. Ties Bill Freehan for No. 9 on franchise's all-time list

Next on the home run list is another catcher, Lance Parrish, with 212.

With four RBI, Cabrera is ahead of Hack Wilson's MLB record pace.

Some think Cabrera will have a few more RBI than Hack did back in 1930.

Miguel Cabrera is going to have 9,000 RBI this year.

We can all agree with Jim Leyland on Camden Yards:

Leyland was feeling generous in regard to Hammel's ejection:

I don't think he was throwing at him. However, in defense of the umpire, he might not have known it was a curve ball at first.

Not surprisingly, the victim of the HBP, Tuiasosopo, disagreed:

"I don't know if it was on purpose or not, but after a team hits three on him, it doesn't look good."

Miguel Cabrera: An amazing season got that much better, capping off a crazy fourth inning with a no-doubt grand slam. Cabrera leads MLB with 65 RBI. His nearest competitor is Chris Davis with 51. No one else in baseball has more than 46.

Matt Tuiasosopo: All he does when inserted in the lineup is hit. Despite the beaning, Big Squiggles raised his batting average to .333, going 2-for-3 with a run scored and an RBI

Victor Martinez, Jhonny Peralta, Alex Avila: Gave us all a thrill, accomplishing something which hasn't been done since the days when the Tigers acted more like the Marlins than the Yankees.

Omar Infante: Broke out of a week long slump with two hits and an RBI.

The Tigers' offense: Long overdue for an explosion, the offense blew up in a good way today. Every starter had at least one base hit. The only position player to not reach base was Donnie Baseball, who entered the game in the seventh inning.

Jose Valverde: I'm STILL ticked off over Friday night. I'm sure my anger will subside sometime before the season ends.

Jim Leyland: Only for using Drew Smyly. He's arguably the most talented arm in the bullpen, yet Smyly is used all too often in low leverage situations, such as the last two innings of a blowout.

Jason Hammel: Purpose pitch or not, 100 times out of 100 you will be ejected when you hit someone after allowing three consecutive home runs. The fact Hammel hit Tuiasosopo hit the head made it an absolute no-brainer ejection.

GAME 53 PLAYER OF THE GAME:

Another game, another wasted quality start. Max Scherzer retired the last 16 Orioles he faced, but was rewarded with a no-decision thanks to, well, we know who. Scherzer's consolation prize was winning BYB PotG, carrying 86% of the vote.

• Pirates 1, Tigers 0: Next verse same as the first

•Cabrera, Davis and the quest for a second crown