The Tigers extended their division lead by five games this week, winning five of six games including three straight over the Cleveland Indians over the weekend.

The Tigers continued their good week-bad week pattern, recovering from a rough road trip in Pittsburgh and Baltimore to take five of six from the Tampa Bay Rays and Cleveland Indians this week. Their weekend sweep of the Tribe gave them a 5 1/2 game lead over the rest of the division, the largest cushion of the season for any team in the AL Central.

After an off day on Monday, the Tigers began a three-game series with the Tampa Bay Rays. Facing the undefeated Matt Moore, Anibal Sanchez shut down the Rays' offense to uphold his end of the billed pitcher's duel. Moore? Not so much. He didn't make it through the fourth inning and the Tigers cruised to an easy victory. On Wednesday, Alex Cobb had a much easier go against the Tigers, shutting them out 3-0. Doug Fister carried a shutout of his own into the ninth inning, but his command fell apart and he allowed three runs. It was the sixth time the Tigers have been blanked this season. Max Scherzer and Victor Martinez stole the show on Thursday, beating former AL Central nemesis Roberto Hernandez and the Rays in the series rubber match.

The Tigers welcomed the Cleveland Indians to town on Friday evening by quickly knocking Ubaldo Jimenez out of the game, the second time they have done so in three meetings this year. Justin Verlander continued to look like his usual self, and the Tigers were well on their way to another easy victory. Jose Valverde allowed a couple of home runs in the ninth inning to make things interesting, but still closed out the win.

The Indians pulled an audible on the Tigers on Saturday, calling up Carlos Carrasco to start instead of Justin Masterson, who was pushed back to Sunday's game. The Tigers were unaffected, once again getting into the Tribe bullpen early and holding on late for a win. Jose Valverde, pitching on a third consecutive day, picked up his eighth save. The Tigers continued their run on Sunday, picking up a win over Masterson and the Indians behind a strong outing from rookie Jose Alvarez and a three run homer from Don Kelly.

Batter of the week: Victor Martinez

Friday was Martinez's coming out party -- he was a triple short of the cycle and scored three runs in the Tigers' 7-5 victory -- but he quietly put together a solid week in the other five games as well. He hit .348/.400/.652 this week with two home runs, five runs scored, and four RBI. His plate discipline -- two walks to just two strikeouts -- gave him the edge over Prince Fielder, who fanned six times this week.

Pitcher of the week: Phil Coke

Partially because I couldn't choose a starter, partially because he had the lowest FIP on the staff, and partially to troll Patrick, Coke is your pitcher of the week. Coke appeared in two games, striking out three batters in 2 1/3 innings without allowing a baserunner. He played a crucial role in Saturday's game, getting four key outs before turning the ball over to Jose Valverde in the ninth to maintain a 6-4 Tigers lead. 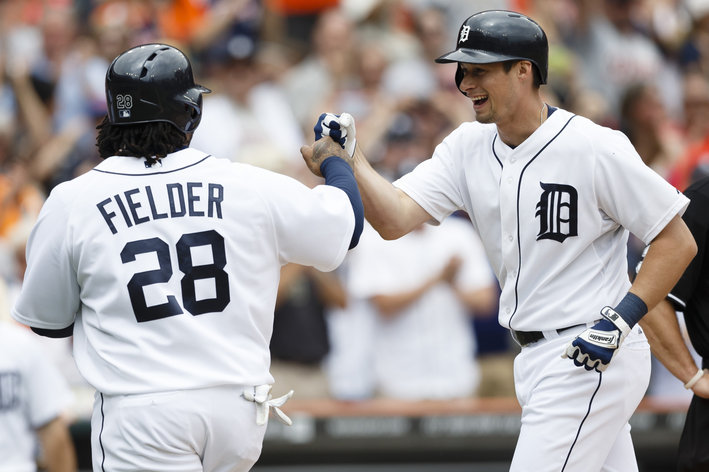 The Tigers head to Kansas City for a three game series against the third place Royals. Kansas City has won five straight games and seven of their last 10 after snapping an eight game losing streak. Their pitching staff has a 3.58 ERA, second best in the American League behind the Texas Rangers.

After an off day on Thursday, the Tigers will play three games at Target Field against the Minnesota Twins. They are 8-4 since losing three of four games at Comerica Park a couple weeks ago. The Twins' bullpen has been their main strength, posting a 2.93 ERA this season, second best in the AL behind the Royals.

The Toledo Mud Hens went 4-3 on the week as the bats came alive against Louisville and Rochester. They scored 42 runs this week and allowed just 23. Double-A Erie went just 1-4 on the week, struggling to score runs after an eight run outburst on Tuesday. Despite being in last place, Lakeland swept the week, winning all six games they played. The pitching staff came up huge this week, allowing just five runs in the six games. Low-A West Michigan went just 2-6 on the week, scoring just four runs in four weekend games against the Lansing Lugnuts.

As someone astutely put in the comments this week, "when Nick figures out a level, he really figures it out." Castellanos seems to have solved the International League, because he's turning it into his own personal Big League Tune-Up Tour. In his last 10 games, Castellanos is hitting .395/.489/.737 with four home runs. He also has seven walks to just three strikeouts in that time period. The Tigers would be better served in the long run to keep Castellanos in the minors for as long as possible, but they will be hard pressed to keep him down there if he keeps tearing the cover off the ball while Andy Dirks flounders in the bigs.

•GIF: Did Cabrera chuck his gum at Raburn?