How many times have we said at the beginning of the season, "You know, I'm really worried about Kansas City this year. If they can finally get that young talent to start hitting and pitching, look out."

Apparently "The Future" has come one too many times for the likes of some fans. The lack of success for the Royals since the 80s has really only produced writers that have done a great job learning fun and new adjectives to describe how much the team sucks. When they traded "sure thing" prospect Wil Myers for James Shields, people thought the team had decided to cash in and make a run for things. So of course the likes of Hosmer and Moustakas are struggling to hit their weight while Myers is shredding the ball in the minors. The trade talks have already begun for Shields.

Luckily, the residents of Kansas City have better things to do. Things such as debating Oklahoma Joe's and Arthur Bryant's and drinking a ton of beer from Boulevard Brewing Company. And if you have to drink one beer from Boulevard, beg for an 80-Acre Hoppy Wheat Beer. 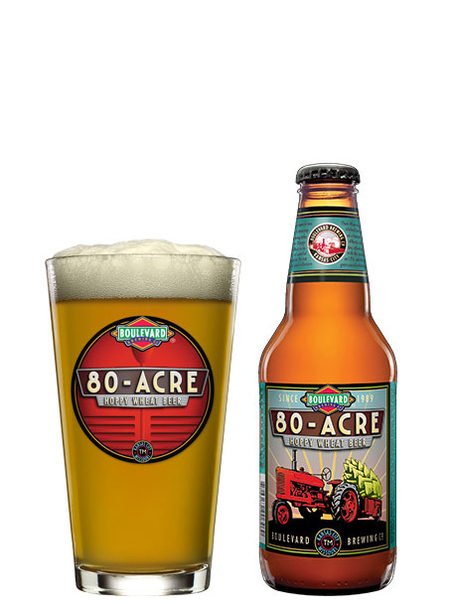 The first thing you should notice about this beer is the beautiful lacy structured head. It's a bit of a mindscrew to see it atop a hazy wheat beer instead of a crisp IPA, but that's just the start. When you take your first sip, your nose detects the citrusy notes of hops, but your tongue bathes in the cereal-y goodness of a wheat beer, the cacophony of flavor ever present. The smooth malt notes start your taste off while the finish is slightly sweet, but the nose of hops counter it nicely, providing the aroma without too sharp a bitterness. It'll pair great with chicken and seafood, and at 5.5% ABV and 20 IBUs, you're going to be able to drink a 12-pack through the series.