Voting for the All-Star game is stupid and you shouldn't do it.

MLB teams seem very eager to have you vote for your favorite players to be in an All-Star game. Probably just team pride, right? Unlikely.

Share All sharing options for: Voting for the All-Star game is stupid and you shouldn't do it.

Driving home from a recent Tigers game, I spotted a giant billboard on a major interstate asking me to vote for Tigers players to make the All-Star game. This is after a ballpark experience packed with signs and video segments asking me to do the same.

This got me thinking, why is it such a high value for the Tigers, or any MLB team, to get me to vote for the All-Star game? I doubt they would spend the big money for a billboard just because they love their guys so much.

Also, voting for the All-Star team does take some serious time and energy. Is it really worth it for the benefit we receive? Let's take a closer look.

The most popular way to vote for the All-Star team is online. If you go to tigers.com, often the first slide directs you to the vote page. Already you've been exposed to an ad.

Freecreditscore.com has got its hooks into you once already.

You press on. On the vote page you see this:

After you enter your choices (I wrote in Brayan Pena because he seems like a friendly guy), you are prompted to enter your email address, date of birth, postal code, and country. This is where the rubber hits the road for the league. With this information they can draw a host of conclusions about baseball fans and who is using the site. 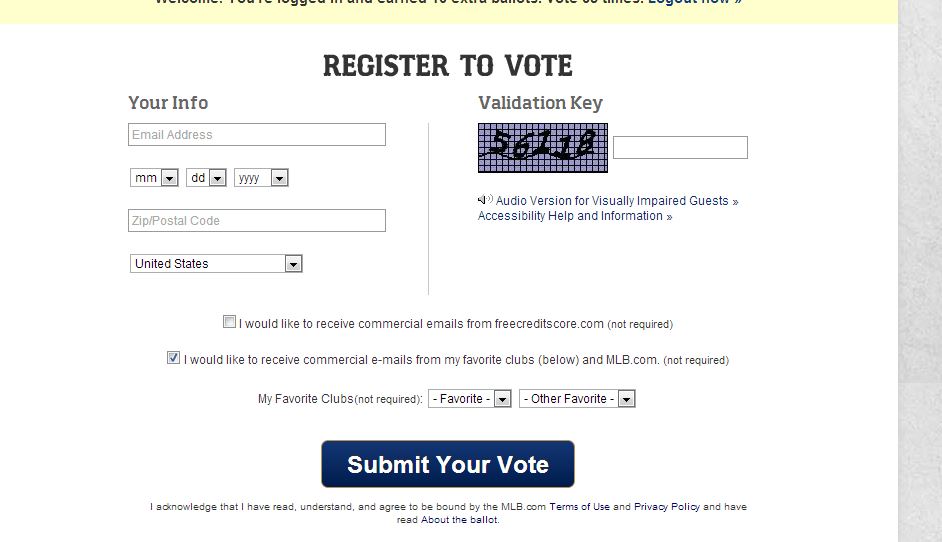 Next you have to navigate two little boxes. First, you can opt-in to receive spam commercial emails from freecreditscore.com (that's exposure number five if you are counting). I have no idea why anyone would do this on purpose. If you were truly interested in this service, wouldn't you just Google it? If you fail to uncheck the second little box, you are going to get spam commercial emails from the club and the league. Remember, you have to get to do this 25 times, remembering to NOT check the first box and ALWAYS UNCHECK the second box. Got it? How many people are going to eventually make a mistake? Lots.

But wait, there is more. If you create a MLB.com user account, you get ten more bonus votes! Whoopie! If you create such an account you open yourself up to an entirely new world of spam targeted commercial emails.

Perhaps you have an email account just for stuff like this. That is a smart step, but remember the time it takes you to set it up and you still have to make up some BS date of birth and zip code (I imagine a disproportionate number of fans are from 90210).

Take note of the last note below the Submit Your Vote button:

I acknowledge that I have read, understand, and agree to be bound by the MLB.com Terms of Use and Privacy Policy and have read About the ballot.

You have two choices here. You can do the only sensible thing, which is to ignore the three documents and lie about having read them. Otherwise, you can spend the 15 minutes studying them, only to still be left with no choice but to accept if you want to vote. I actually started reading these documents to try to explain what further marketing to which you are exposing yourself, but I succumbed to the same "ah, screw it" resignation that every reasonable person does when confronted with this legal crap.

After you do submit your vote, you aren't done.

You can now spread this virus on Twitter or Facebook, do a score check (with enrollment in freecreditscore.com, of course (exposure six)), and take the Home Run Derby Fan Poll, where I'm certain you'll be exposed to loads more propaganda.

Outside of direct marketing, there is also the psychological affect of affirming your allegiance to particular players and teams 25 or 35 times. What better way to drill into people's minds that they really like your product than to have them fill out a form saying exactly that? It's brilliant marketing and creates strong product loyalty.

So we've looked on the "cost" side of the equation; what about the benefit side? For all that hassle, you do get a vote and each vote counts toward your player making the team. But consider the ways that this is quite worthless.

If you are only voting one time, you are spinning your wheels. The poor sap full of passion and free time can vote 35 times, completely steamrolling your single measly vote.

Also, some of these poor saps are voting for people who have no business being in the All-Star game. As of June 8 Derek Jeter has 529,234 All-Star game votes. Come on, people.

Finally, do you really care that much? I mean, if your favorite player is a borderline All-Star, he might get one at-bat in the game. Why bother? Sure, it's more for the honor of it, but how much do the guys really care? Three days at home and away from the game probably looks pretty darn attractive in the middle of a six-month season.

There you have it, voting for the All-Star game is a stupid waste of time. Take my advice and don't bother. If you find you miss it that much there is always THE FINAL VOTE and they can get you all over again.

•Voting for the All-Star Game is stupid, don’t do it

•FanPost: Who should the Tigers target at trade deadline?