It took a questionable strike-three call, but the Tigers beat the Royals to give Max Scherzer his ninth win of the season.

A sacrifice fly from Victor Martinez gave the Tigers a 3-2 lead in the top of the eighth inning, propelling the Tigers to their 36th win of the season. Max Scherzer allowed two runs in seven innings, improving his record to a spotless 9-0. Aaron Crow took the loss for the Royals, which snapped their six-game winning streak.

The game did not go without controversy, though. With a runner on second base in the bottom of the ninth inning, home plate umpire Jordan Baker called out Billy Butler on a 3-2 split-fingered fastball that ran inside. Butler, understandably, did not like the call. He returned to the dugout after a short argument, but was ejected moments later. Butler's strikeout was only the first out of the inning, but it was the closest the Royals would come to scoring. Valverde retired Lorenzo Cain and David Lough quickly to end the game.

The Tigers took an early lead in the top of the second inning. Don Kelly hit an RBI single to left field, scoring Martinez easily from second base. Third base coach Tom Brookens made a questionable-at-best decision to send Omar Infante from third base, as Infante was thrown out by a mile at the plate to end the inning.

The Tigers doubled their lead in the top of the fifth inning when Andy Dirks just beat out a potential double-play ball, scoring Infante from third. How close was it? See for yourself: 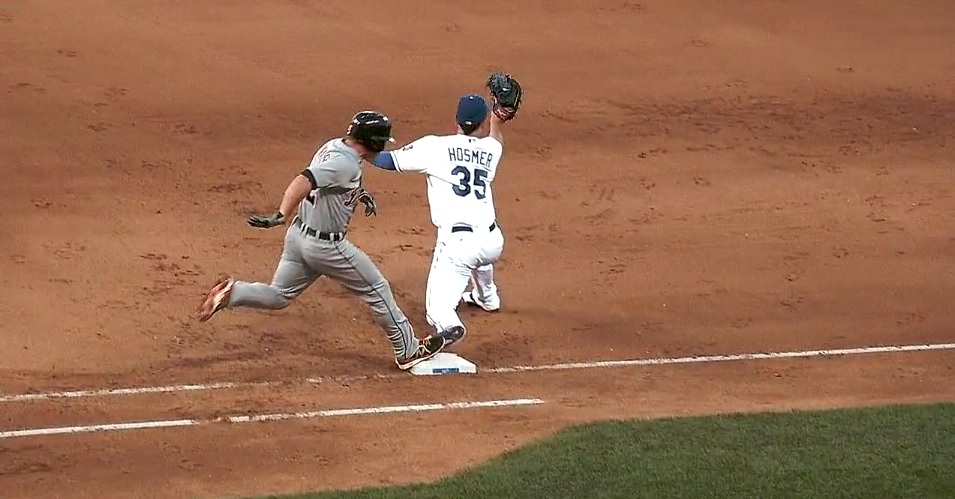 As has been the case with 2-0 leads in this series, the Royals tied the game in the next half inning. David Lough led off the inning with a solo shot to right field. Later in the inning, the bunt proved fruitful for the Royals. Mike Moustakas singled, Chris Getz sac-bunted him over to second, and Alcides Escobar singled home Moustakas, knotting the score at 2-2.

Crow was able to strike out Torii Hunter to end the top of the seventh inning, leaving the bases loaded for the Tigers. However, he would not be so lucky in the eighth. He hit Miguel Cabrera to lead off the inning, then allowed a single to Prince Fielder, which sent Cabrera over to third. Martinez hit a fly ball to left field, but Alex Gordon was unable to throw out Cabrera at the plate, and the Tigers took a 3-2 lead that would prove to be the game's final margin.

Both Scherzer and Royals starter Wade Davis were much more effective in this game than the first time they faced off this season. Scherzer struck out a season-low six batters -- which tied his total from his last start against Kansas City -- but only allowed two runs on three hits this time around. Davis, who left his start at Comerica Park in the fourth inning, pitched into the seventh, allowing two runs on eight hits.

The Tigers and Royals will close out their series tomorrow afternoon, starting at 2:10 p.m. Justin Verlander and James Shields will take the mound hoping to repeat the pitchers' duel they had back in April at Comerica Park. Shields has a 2-6 record, but an excellent 2.81 ERA.

It's becoming an annual event in Kansas City now. Our friend Jim Nelle, a.k.a. Tiger Suit Guy, was in his usual seat tonight behind home plate. 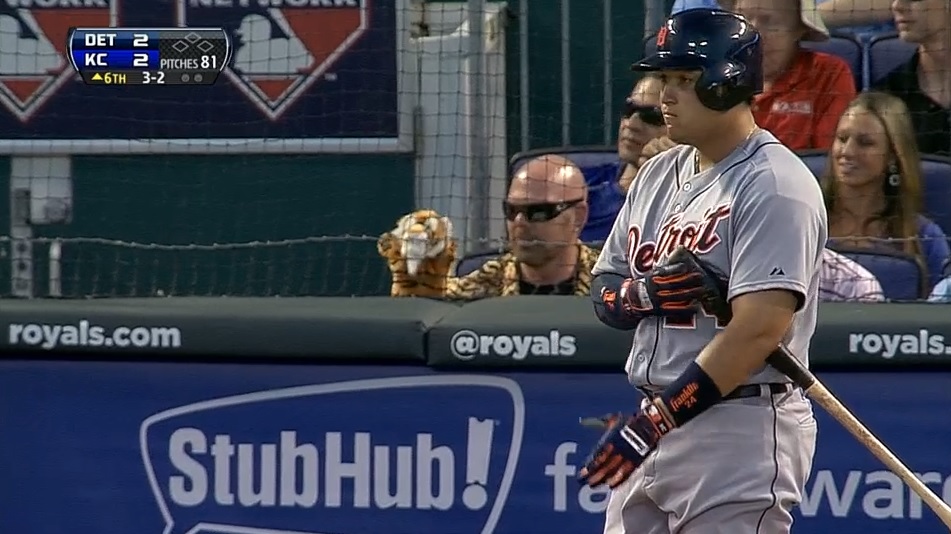 Don Kelly got quite a bit of dap tonight. First, this:

Then in the seventh inning, Ned Yost went to his bullpen, bringing in the left-handed Tim Collins to face Kelly.

There were no shortage of humorous tweets after Butler's ejection in the ninth.

Elsewhere, Yasiel Puig was hit in the face with a fastball and didn't leave the game. I'd embed video, but- "lol no you won't" -MLB.

Anyway, benches have cleared twice in L.A., one of which resulted in this pipe dream.

Max Scherzer: Seven strong innings are becoming the norm rather than the exception for this rotation, but it still deserves to be recognized.

Victor Martinez: 1-for-3 with a run scored and the game-winning RBI in the eighth inning.

Omar Infante: He left a couple runners stranded in the eighth inning, but a 3-for-4 night raised his average back up to .303 for the season.

Torii Hunter: 0-for-5 with three strikeouts, including a big one with the bases loaded in the seventh inning. Somehow, he is still hitting .300/.347/.404 on the year.

Jhonny Peralta and Alex Avila: a combined 0-for-7 at the plate for these two.

Jose Valverde: He got the save, but there will be no shortage of words printed about how it happened over the next few days. I can already hear Patrick's teeth gnashing.

GAME 62 PLAYER OF THE GAME:

Doug Fister did all he could, but even he could only take home 80% of the vote in the BYB Player of the Game poll.