This is my third attempt to write this post. I have been a little frustrated with my attempts, but I hope the wait was worth it. If it looks any different than the previous posts, that's my excuse.

The Twins were the hosts of the first series of the season. That series will be most noted for being played in frigid conditions that gave us a glimpse into how Miguel Cabrera and Prince Fielder looked in balaclavas, the Tigers ability to score runs early in the game, and their inability to hold onto a lead thanks to a bullpen that better resembles what happens when you throw gasoline on top of a Dumpster fire, then throw tires on top of that.

The bullpen issue has been toyed with a few more times since then, but as it stands, there still isn't a reliable solution to get guys out in the 9th inning. Jonah Keri's piece on the reliance of a closer, the meaninglessness of saves, and, well, how dumb the idea of a closer is spelled out just how desperate the Tigers are to find a safe option. For now, I just recommend drinking heavily past the 7th inning.

Surly Brewing Company has...had a little fun with naming their beers, and the names provide how most Tigers fans have felt in the last couple months (Furious, Bender, CynicAle). However, it's only appropriate that for this series, we focus on what dealing with #TwinsHits and Justin Morneau feels like: Hell. 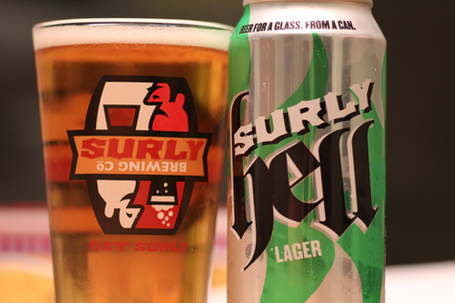 Aside from being a popular vacation spot in Michigan, Hell is a zwickel lager that is unfiltered after it leaves the cask. Hell is named after it's color (helles, a lager style meaning "light"), and is an easy drinking beer made with Minnesota wheat. The light color doesn't indicate lack of flavor, though, as this beer still has a great smooth bread-like flavor and a touch of citrus aroma, plus a taste that finishes slightly sweet. Surly is another brewery canning their offerings to make them easy to transport, chill, and savor. At 4.5% ABV and only 20 IBUs, we have another nice, easy drinking picnic beer that will go great with a brat and the first 6 innings of any game.