Before we get going with all the Beer of the Series banter and formalities, a quick note: I've attached a poll to this post and would love some feedback based on the beers already discussed and future posts. Even though Michigan has some great beers, I have been tempted to re-review a brewery or two (Bells, Founders, etc), but I would like to try and review as many breweries as possible. Also, given that we're in lighter, summer beer times, please let me know in the comments if you would prefer for me to talk more about the easier drinking summer beers or would like some reviews of the darker porters and stouts as well.

The Buck Truck makes their only visit to Comerica this week. When we last saw these guys, Valverde was imploding on a Friday night and Porcello ran out of gas on a Sunday, sandwiching a relaxing (but altogether forgettable) blowout by the Tigers. The Orioles are half game better than the Tigers going into the series and currently lead the wild card hunt. These two teams are fairly evenly matched, which means that all three games could go to the bullpen, giving you every excuse to drink you ever needed.

Arcadia Brewing Company has been producing classic English-style beers since 1996 and has largely specialized in small-batch production, giving each beer unique character. They have several tap-only offerings at their tap room, but also have good stuff distributed all across Michigan including our latest beer: Loch Down Scotch Ale. 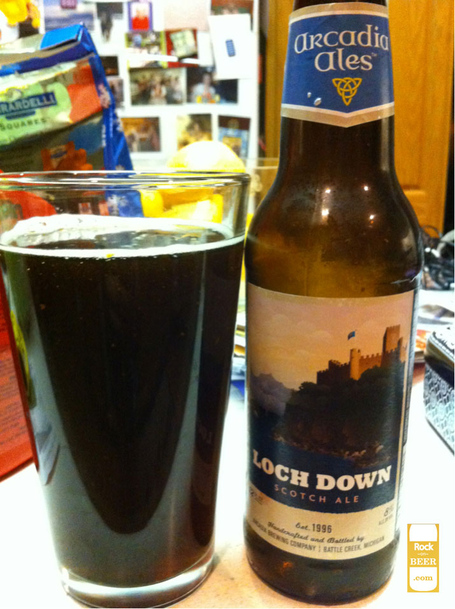 Loch Down is listed as a Scotch Ale, but it shares more in common with a Wee Heavy (as you'll see later). This beer definitely packs a punch, especially with the smoky malt and the strong caramel-nut flavor. The earthy bread aroma and single-malt characteristics are instantly evident, and a light hop note finishes the beer to balance the strong toasty barley and wheat flavors. at 8.5% ABV and 63 IBUs, this is a beer that you only need one or two of with a chocolate brownie sundae to finish the evening. Hopefully after a complete game victory.

What would you prefer for future Beer of the Series installments?