Max Scherzer and Drew Smyly were dominant in shutting down the Orioles. Miguel Cabrera supplied all the all the offense the Tigers would need with his 19th home run.

The Detroit Tigers rode the arms of Max Scherzer and Drew Smyly to a 5-1 win over the Baltimore Orioles. With the victory, Scherzer becomes the the first ten game winner in the American League.

Credited with the win thanks to six innings of seven hit, one run baseball, Scherzer now walks alone in Tigers' lore as the only pitcher to start a season 10-0. Drew Smyly pitched the final three innings for the Tigers, retiring all nine Orioles he faced. Starting and losing pitcher Jake Arrieta was rocked for ten hits and five runs over 4 2/3 innings.

But Scherzer was the story of the night. He now leads the AL in victories, making team history in the process.

With Jackson on first after a lead off single, Cabrera crushed the first pitcher he saw, Arrieta throwing a nothing slider. Flashing his mammoth opposite field power, Cabrera depositing his fly ball over the scoreboard in deep right center. The two run bomb was Cabrera's 19th homer of the season, and his third in four games versus the Orioles (MLB.com video).

Leading off the second, Davis drilled a bomb of his own, sending a Scherzer fastball over the scoreboard deep right center, landing just a couple rows short of Cabrera's home runb. The solo shot was number 24 on the season for Davis, and pulled the Orioles within a run at 2-1.

The Tigers' lead off man reached for the second consecutive inning. Jhonny Peralta doubling off the base of the wall in dead center to start the bottom of the second. One down, Infante slapped a single through the hole in the side, Peralta advancing to third. Brayan Pena couldn't drive in the run from third with less than two out, sending a can of corn to shallow center.

But Jackson came through with his second consecutive single, dropping a liner just in front of center fielder Adam Jones. The two out RBI pushed the Tigers' lead to 3-1.

The Orioles scratched together a threat in the top of the fourth, Davis and Matt Wieters with back-to-back singles. Scherzer was able to pitch out of the two on, one out jam. J.J. Hardy popped up and Chris Dickerson became Scherzer's fifth K victim. But the odds were Scherzer would not be pitching deep into the game, his pitch count at 71 after four innings.

Infante singled with two down in the bottom half of the fourth, then proceeded to steal second (Wieters' cleats stuck in the dirt, making for an entertainingly bad throw). But Pena bounced out to end the mini-threat, the Tigers lead holding steady at 3-1.

A not-quite-as-sharp Scherzer found himself in more trouble in the fifth, allowing the first two Orioles to reach base. Ryan Flaherty walked, Nate McLouth singled. After Scherzer struck out Manny Machado and Nick Markakis, Jones hit a ground ball back up the middle. Infante got to the ball, but didn't grab it cleanly, Jones credited with a single to lead the bases for the AL's leading home run hitter, Davis.

It was an epic mano-a-mano battle.

Bringing the heat, Scherzer found himself ahead in the count 1-2 on Davis. He then appeared to paint the black on two consecutive high-90s fastballs, Davis keeping the bat on his shoulder. Instead of the expected punch out, home plate umpire Tim Timmons didn't flinch, the count now full. The Comerica Park crowd rained down boos as it appeared Scherzer was getting squeezed (Pitch tracking disagreed, but damn, both pitches are often called strikes). After Davis fouled off a breaking ball, Scherzer reared back for another fastball, this one hitting 97 MPH on the gun. Davis swung ... and missed. Inning over, a visibly fired up Scherzer had struck out the side.

The Tigers counted by loading the bases in the next half inning. Jackson led off the bottom of the fifth with his third straight single, Hunter moving him to second with his first base hit of the game. Both runners moved forward 90 feet as Arrieta struck out Cabrera on what was ruled a wild pitch.

First base open, the Orioles elected to intentionally walk Prince fielder, loading the bases for Victor Martinez. Martinez came through with liner to deep center for a sacrifice fly, Jackson scoring, Hunter tagging up to take third. Peralta followed with a two out RBI single to right to plate Hunter.

The Tigers having taken a 5-1 advantage, Orioles manager Buck Showalter yanked his starter, Arrieta for left-hander Troy Patton. Patton would retire pinch hitter (the just recalled) Avisail Garcia on a ground ball to end the rally.

His pitch count at 97 to start the sixth, Scherzer took the mound for what was likely his final inning of the night. After allowing a one out single to Hardy, Scherzer stuck out both Dickerson and Flaherty to the inning. Scherzer wrapped up another quality start with ten strikeouts, scattering seven hits while allowing just one run.

Infante led off the bottom of the sixth with his third single of the night. Of course, Jim Leyland ordered Brayan Pena to sacrifice bunt. Of course, Pena couldn't do it. Of course, he bunted into a 2-6-3 double play. Of course, the fan base lost their minds.

Pena's bunt was straight down, bouncing high off the plate. As Pena just stood there, Wieters grabbed the ball and fired to second to start a ridiculous twin killing.

Two lessons were to be learned on the play. Always run out batted balls and STOP BUNTING. I'm guessing only one will take.

But the failure to execute wasn't going to make a difference tonight. Five runs would be more than enough. Why? The Tigers' pitching was that damn good.

Scherzer had received Leyland's "Handshake of doom" after six, Smyly taking over in the seventh. Ten pitches and three ground balls later, the Orioles had been retired.

It was more of the same in the eighth from a lights out Smyly. He again retired the Orioles in order, including strikeouts of Wieters and Davis.

With Smyly on a roll, Leyland goes old school and elects to have him pitch the ninth as well. Three up, three down, GAME OVER. Scherzer and Smyly ended the game by combing to retire the last 11 Orioles in order, and 12-of-13 over the last four innings.

The Tigers are now a season high ten games over .500 at 39-29. Their division lead grows to five games thanks to the Kansas City Royals knocking off the Cleveland Indians 2-1. The Royals have won eight of ten, moving into second place in the Central at 34-34. For what it's worth, the Tigers are 7-3 over the same stretch.

In game two of the series, the Orioles will start left-hander Zach Britton (0-1, 9.00 ERA) instead of ailing right-hander Jason Hammel. Britton has made one start this season, allowing ten hits and six runs over six innings in a loss to the Mariners. The Tigers counter the Orioles Triple-A pitcher with an ace, Justin Verlander (8-4, 3.41 ERA). Bouncing back from a rough patch, Verlander is 4-0 in his last five starts (a blown save away from five straight wins). First pitch is 7:08 PM.

For the second game in a row, the graph never enters opposition territory.

With the victory Scherzer become the first ten game winner in the AL, and the first Tigers starting pitcher (records only go back to 1909) to start a season 10-0. Scherzer and Vern Kennedy in 1939 were the only pitchers to start a season 9-0. Amazingly, after recording his ninth win on June 5, Kennedy was 3-9 over the remainder of 1939.

Scherzer also had a strikeout milestone on the line tonight.

Make it 14 straight starts with at least six K, Scherzer finished with ten. It was his ninth game since the since the start of 2012, and fifth this season, with 10+ punch outs.

Good to see Tigers fans showing appreciation for Torii Hunter's career, considering how much damage he did as a Minnesota Twin.

Standing ovation for Torii Hunter between innings at Comerica Park after scoreboard shows video of his 1st and 300th home runs.

Miguel Cabrera had been slumping in June, hitting .261/.452/.413 with two home runs and eight RBIs. Well, slumping if your name is Miguel Cabrera, anyway. The vast majority of major leaguers would be thrilled with an OPS of .865 for the month. To put the "slump" in perspective, Jhonny Peralta leads all AL shortstops with an .867 OPS.

So much for the slump, Cabrera had three hits, including a home run and legging out an infield single in the third.

That single was Cabrera's fifth infield hit this season -- tied with Brayan Pena for 4th-most on the club. #tigers

An infield single! What can't Cabrera do?

And if you really want to commemorate Cabrera's infield hit, you can buy the baseball!

Check out Miggys infield single. Stop by authentics if you are interested. #tigers. pic.twitter.com/KhjsTPrHcw

Phil Coke's Brain has your Rod Allen quote of the game:

"Prince couldn't climb the ladder and get it." Prince shouldn't be doing a lot of ladder climbing anyway.

Fox Sports Detroit just debuted the "Oh My God, who had to climb up there to install that?" camera. 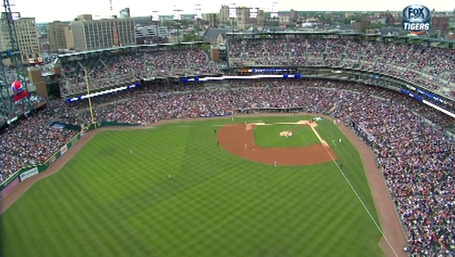 Sure that isn't the top row nose bleed seats?

Meanwhile, in the Upper Peninsula:

@Detroit4lyfeRob I fell asleep for an inning. Shhh, don't tell

The Tigers butchering another sacrifice bunt sent Tigers fans over the edge.

NOBODY KNOWS HOW TO SACRIFICE ON THIS TEAM. SO STOP GOD DAMN DOING IT

With the rant out of the way, I'd like to personally thank Max Scherzer and Drew Smyly for making the failed bunt moot.

Post game, Jim Leyland made an unusual plea to the media:

"I hope everybody quits going up to Rick Porcello and asking him about being the closer. He's NOT going to be the closer. He is not a closer. There's no sense going to Rick and asking about it. It's just not necessary."

The media is asking Porcello about becoming the closer? HUH? That's news to to us at BYB. But it could be a back-handed shot at the silliness that is Detroit sports talk radio. Porcello as closer (or pick any starter, I've even heard Justin Verlander mentioned) is a suggestion often made by the "brilliant" callers on WXYT.

@blessyouboys who would do that? That would be stupid.

Leyland says he wants no more questions about Rick Porcello becoming the closer. Which begs the question: Porcello for setup man?

Max Scherzer: As mentioned above, reached a couple of milestones with tonight's victory. But Mad Max winning the two out, bases loaded matchup with Chris Davis was worth the price of admission alone.

Drew Smyly: Was unhittable in his three innings. Retired all nine Orioles he faced.

Austin Jackson: Three hits, a run scored and an RBI. Jackson is only hitting .438 in four games since coming off the DL. The Tigers are 3-1 since their trigger man returned.

Jim Leyland: Ask a catcher who can't bunt to bunt, get a HISS. I think Leyland calls bunts just to troll the Tigers fan base.

Andy Dirks: In a rough patch, 0-for-2 night has Dirks hitless in his last three games, and two for the last five.

GAME 67 PLAYER OF THE GAME: