I hope you will all forgive me for this post being a day late. I was on a business trip yesterday (in possibly the nicest hotel I have ever stayed in in my life, props to the Charley Creek Inn in Wabash, IN), then went out for my father's 54th birthday. I'm glad Jhonny Peralta knew the seriousness of the occasion and took care of making sure my old man got a victory. I'm still waiting for the Tigers to win on my birthday.

The Boston Red Sox have had a rather peculiar season. In a year in which most people figured they'd be rebuilding (as only a team with a payroll north of the Tigers can rebuild), they have been the class of the AL East. It certainly helps when the rotation has been giving you solid start after solid start. Even John Lackey, who was left for dead two years ago, has been getting in on things. Luckily for the Tigers last night, their bullpen is cobbled together with old chewing gum and paper clips. Granted this is a step up from the Tigers 'pen, which is cobbled together with wet newspaper and prayer, but it's still not ideal.

(As an aside, what is the proper singular demonym for the Red Sox? Is it Red Sock? Red Sox player? Bostonian? Bee? I welcome any and all suggestions in the comments.)

Hopefully last night, everyone had a chance to drown their sorrows, then flip the script and celebrate the victory with a beer or two. Based on the poll results, it seems as though most of you are on board with me repeating a few breweries. Those results made this beer easy. In honor of the first day of summer occurring during this series, the Beer of the Series is Bell's Oberon. 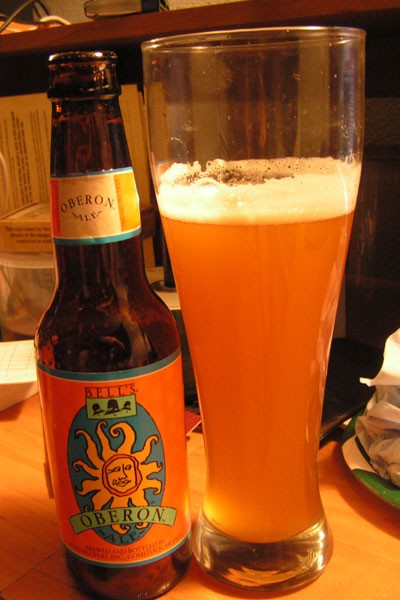 Aside from Stone Arrogant Bastard (click the number 6 at the bottom down there), this is probably the most widely distributed of the BOTS offerings. Oberon is an unfiltered wheat ale, which leads to the cloudy appearance. Many American's are very familiar with its illegitimate poser, Blue Moon (which is basically Coors Light with food coloring and sediment), but comparing Blue Moon to Bell's Oberon is like comparing a Pontiac Fiero to a Corvette. I usually tell people I serve that the orange garnish for Blue Moon is necessary to complete the beer, whereas with Oberon, the orange garnish accentuates an already great beer (in fact, when we have Oberon on tap, I do whatever I can to not sell Blue Moon). The beer tastes exactly like summer should taste: light, effervescent, and a hint of spice, followed with a smooth, slightly sweet roasted malt flavor. The hint of hops at the finish gives the idea of citrus (which the orange plays off of), but just enough to want you to come back for more. If you can find the 5L keg of this at the liquor store, call five friends, get a good frisbee, and fire up the grill: your Saturday night is planned, and at 5.8% ABV and 23 IBU, the keg should be empty, and the toast to a series win should be easy to do.