The Tigers rallied after another sub-par outing from Justin Verlander to beat the Boston Red Sox 7-5 today, taking three of four games from the Sox this weekend.

The ace wasn't at his best, but that didn't stop the Tigers today. Justin Verlander allowed four runs in five innings, but the Tigers rallied against the Boston Red Sox bullpen for the second time this weekend to finish the series with a 7-5 victory.

Joaquin Benoit, who came on to get the final out of the top of the eighth inning, picked up his second win of the year when the Tigers took a 7-4 lead in the bottom half of the inning. Benoit allowed a run in the top of the ninth, but finished the game without any other drama. Former Tiger Andrew Miller took the loss for the Red Sox despite not allowing an earned run.

The Tigers took an early lead in the bottom of the first inning thanks to more fireworks from the top of the order. Red Sox starter Felix Doubront walked the first two batters of the game before Miguel Cabrera lined a ground-rule double over the center field wall to give the Tigers a 1-0 lead. Prince Fielder's groundout to first base scored Torii Hunter from third for a second run in the inning.

The Red Sox tied the game at two in the top of the second inning, scoring a couple of runs in part thanks to a walk and a hit batter by Verlander.

After the Tigers scored a run on a passed ball from Red Sox catcher Ryan Lavarnway to take a 3-2 lead in the bottom of the second, the Red Sox tied the score again when Omar Infante airmailed a throw on a double play ball off the bat of Mike Napoli. Dustin Pedroia -- who replays show may have been out at first base on a ground ball in the hole to Jhonny Peralta -- scored from third on the play.

The Red Sox scored a fourth run off of Verlander in as many innings when Shane Victorino's groundout scored Lavarnway, who Verlander walked to start the inning. The at-bat was a microcosm of Verlander's afternoon: five fastballs, four balls, and an uncharacteristic lack of command from the Tigers' ace.

Verlander departed after just five innings, having thrown 112 pitches. He threw first pitch strikes to just 15 of the 26 batters he faced. Drew Smyly came on in the sixth to spell Verlander and threw 2 2/3 scoreless innings. He got into a bit of a jam in the eighth inning, allowing a couple of base hits, but Benoit struck out pinch-hitter Daniel Nava to end the threat, keeping the game tied at four.

The late inning substitution would come back to haunt the Red Sox. Nava appeared to make a basket catch on a line drive from Avisail Garcia to lead off the eighth inning, but let the ball drop when transferring it from glove to hand. Second base umpire Mike DiMuro didn't see things the same way, and signaled that Nava had dropped the ball. Red Sox manager John Farrell came out to argue the call and was ejected a few moments later.

Garcia, who ended up on second base after Nava's error, came around to score the go-ahead run on a bases-loaded sacrifice fly from Torii Hunter later in the inning. The Tigers extended their lead to 7-4 with a two-run single from Prince Fielder after Miguel Cabrera was intentionally walked to re-load the bases.

The Tigers have an off-day tomorrow before starting a three-game series with the Los Angeles Angels at Comerica Park. Rick Porcello will start for the Tigers on Tuesday opposite left-hander C.J. Wilson.

Reports of Verlander's demise have been greatly exaggerated. His fastball command has been an issue at times this season, and it seemed to be escaping him again today. However, was still among the top 10 pitchers in the American League in strikeout rate, FIP, xFIP, fWAR, and SIERA heading into today's game. He has also faced a murderer's row of opponents. Six of his 16 starts this season have come against Boston, Baltimore, and Cleveland, three of the top five run scoring offenses in the AL. So, clowns like this?

WHEN IS THE LAST TIME JV GAVE UP 5 RUNS AT HOME AND THEN 4 IN HIS NEXT START.

It seemed as if defense would be the difference in today's game early on. Great plays by Jose Iglesias and Jacoby Ellsbury in the first inning limited the Tigers to two runs off Doubront, while Verlander got zero help from his defense in the middle innings. While this was still the case, it was the Red Sox who came unraveled late in the game. Lavarnway's passed ball in the third inning was a glaring error, while Miller's overthrow on Holaday's bunt in the eighth was the tipping point for the game spinning out of control for Boston.

Despite a few first-pitch outs -- because, you know, everyone hits 1.000 in those situations -- the Tigers offense drove Doubront's pitch count over 100 in the fifth inning, getting into the Red Sox bullpen by the sixth.

How important is Drew Smyly to this bullpen? The Red Sox used four relievers, including former closer Andrew Bailey, to cover fewer innings than Smyly did himself today.

Jim Leyland's decision to have Bryan Holaday bunt in the bottom of the eighth inning is a perfect use of the sacrifice -- and it happened to work out even better for the Tigers when Andrew Miller airmailed the throw to first. With Garcia on second base and the weakest hitter in the order at the plate, sacrificing Avi to third base would have given the Tigers' top of the order two chances to get the runner home from third to take a 5-4 lead.

Mike Napoli stepped to the plate in the ninth inning with a couple of buttons undone on his jersey, warranting a flurry of tweets from the Tigers faithful. 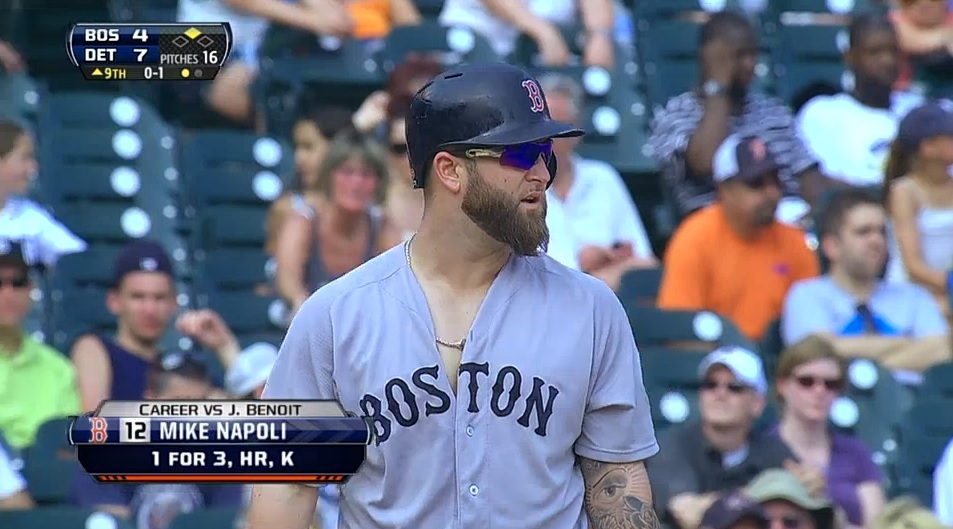 "Suns out, guns out, brah" -Napoli

Guys I think Mike Napoli is coming onto me.

Austin Jackson: Two hits, three walks, and two runs scored. The Tigers' catalyst is back in a big way.

Miguel Cabrera: Two more hits for Miggy, including an RBI double to deep center field in the first inning. Had it not bounced over the fence, he would have had a second RBI.

Prince Fielder: The homer-less streak still lives, but two hits and three RBI -- including a dagger of a two-run single in the eight -- for the Prince may finally break him out of this horrible slump.

Drew Smyly: Didn't put him in originally, mostly because I'm shocked at the idea of having a competent bullpen.

Jim Leyland: We have given Leyland plenty of gruff this season for his bullpen management, but aside from a rough inning from Phil Coke on Thursday, Leyland did a pretty good job managing the pen around a rough weekend from the Tigers' starters. He got 4 2/3 innings out of Smyly and has the benefit of a day off tomorrow to recharge Smyly's batteries before the Los Angeles Angels come into town.

Justin Verlander: Whether you're concerned about him or not, it's clear that he was struggling today. He allowed four runs and 10 baserunners in just five innings and only struck out four hitters.

Infield defense: Despite a nice play from Martinez in the sixth, the defense did Verlander no favors earlier in the game. Both Peralta and Infante goofed on plays that should have been made, leading to the go-ahead run in the fourth inning.

Umpires: Dustin Pedroia appeared to be out on a play at first base early in the game, and Daniel Nava's error in the bottom of the eighth looked like a catch. The calls may have evened out -- though I doubt Red Sox fans would agree -- but one thing is certain: the "human element" needs to go.

Mario and Rod: That stretch where they tried to pronounce Craig Breslow's major at Yale was just brutal. Shake it off and try again Tuesday, guys.

GAME 73 PLAYER OF THE GAME:

•Cabrera in the MVP race