The last time all five teams in one division finished at or above .500 occurred in the National League East in 2005. The Washington Nationals finished 81-81, last in the division and nine games out of first. Here in 2013, all five teams in the AL East are currently above .500, with the Boston Red Sox and Baltimore Orioles leading the way.

The Tigers had to deal with those two heavyweights last week in a seven game stretch at Comerica Park. All things considered, a 4-3 record against two playoff contenders isn't bad. However, the Tigers were outscored by three runs, and the Red Sox and O's exploited two of the Tigers' biggest weaknesses -- defense and the bullpen -- in a big way.

On Monday, Max Scherzer picked up his 10th win of the season, holding the Orioles to one run in six innings, and Drew Smyly shut the door the rest of the way with three perfect innings. Things didn't go so smoothly for Justin Verlander the next night, who allowed five runs off home runs from J.J. Hardy and Adam Jones, and only pitched five inning.

The Orioles capped off the series by teeing off on Rick Porcello, scoring six runs in one inning off the once-hot righty. Porcello rebounded to pitch a couple of scoreless innings to save the bullpen, but that didn't matter in the end. Darin Downs and Evan Reed both allowed runs in the seventh and eighth innings before turning a 9-3 game over to Jose Valverde in the ninth. Five batters later, it was 13-3, and Valverde's fate had been sealed.

On Thursday, the club announced that Valverde would be designated for assignment. He is still currently in the 10-day waiver period before he can either head to the minors or become a free agent.

As for the actual baseball taking place that day, rookie Jose Alvarez allowed his first runs of the season, but managed to put together five solid innings. The bullpen shut the door for the next couple innings, but Phil Coke allowed a run to put the Red Sox ahead 3-2. The score stayed this way until the bottom of the ninth, when Jhonny Peralta hit a walkoff home run off closer Andrew Bailey to give the Tigers a 4-3 win, their first walkoff victory of the season.

Doug Fister got roughed up on Friday, allowing six runs on 11 hits in 3 1/3 innings. The offense did its best to mount a comeback against starter Jon Lester, but the Tigers' bullpen once again proved too leaky to keep the score close.

Max Scherzer allowed two runs in the first inning of his start on Saturday, but settled down to pitch through seven innings without allowing another run. Meanwhile, the Tigers scored early and often against rookie Allen Webster. Victor Martinez hit a first inning grand slam and the Tigers scored in five of the eight times they came to the plate.

Justin Verlander struggled again on Sunday, allowing four runs in five innings. He didn't allow a home run this time around, but his fastball command once again went awry, leading to three walks and a hit batter. The offense took advantage of some sloppy Red Sox defense (and a bit of help from the umpires), scoring three late runs to win 7-5.

The Tigers ended up taking three of four from the Red Sox to finish the week at 4-3, but if not for some late inning magic in a couple games, they could have easily came away from that stretch 2-5. Today could have been a dark day, indeed.

Miggy had the quietest breakout week a reigning MVP could possibly have, hitting an astounding .536/.606/.821 in the team's seven games. He was on base 20 (!) times, but only scored three runs, two of which he drove in himself via the home run. Prince Fielder's sluggish week was largely to blame. Prior to Sunday's game, Prince was just 2-for-23 with four walks and five strikeouts.

Max was a monster this week, picking up two victories while allowing just three runs over 13 innings of work. He struck out 16 batters while walking just two in his two starts. He is now 11-0 with a 3.05 ERA on the season and is making an emphatic case to start the All-Star game. Drew Smyly had a big week as well, picking up a win and a save in 7 2/3 scoreless innings. 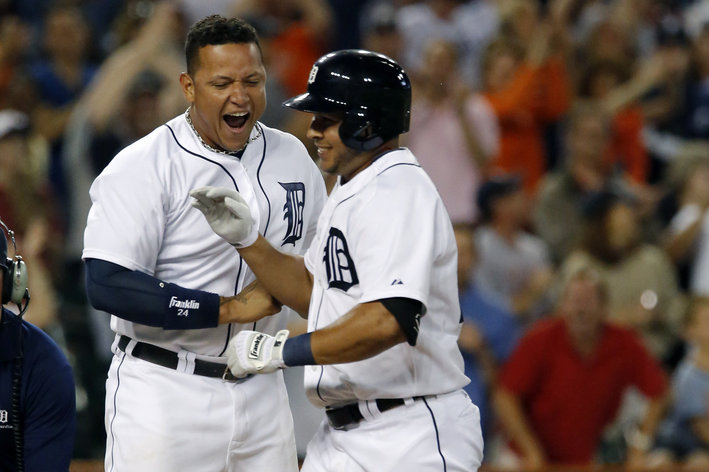 The Tigers looked as if their bullpen would be saddled with yet another late-inning loss before Jhonny Peralta hit a walk-off home run to give the Tigers a 4-3 victory.

After an off-day on Monday, the Tigers welcome the Los Angeles Angels into town for the final meeting between these two teams in 2013. The Angels have faded back into relative obscurity after an eight-game winning streak towards the end of May. They have won seven of their last 10 games, but still sit 10 games behind the Oakland A's in the AL West. C.J. Wilson and Tommy Hanson are projected to start the first two games of the series, and Jered Weaver will make his first appearance at Comerica Park since this little dust-up in the series finale.

The Tigers will then head to Tampa to finish up their season series with the Rays, who have struggled since leaving Detroit. Between losing Matt Moore and Alex Cobb to ineffectiveness and a concussion, respectively, they have had to make some minor rotation adjustments. Rookie Alex Colome is currently scheduled to start Friday's matchup, while Chris Archer and Jeremy Hellickson are on track to start the weekend games. Oh, and they added some guy named Wil Myers to their 25-man roster last week. I hear he's pretty good.

It was a rough week for the Tigers' farm system. No team won more than two games, and only Low-A West Michigan finished with a .500 record. Toledo's 2-5 record was largely due to a pitching staff that had a 4.50 ERA.

Down in Double-A, Erie only scored 14 runs in six games. Stellar performances by Victor Larez and Kyle Lobstein were the main reason why they came away with a couple wins.

At High-A Lakeland, the pitching was even worse. The Flying Tigers allowed 45 runs in six games and finished 1-5. Stephen Moya had a nice week, hitting .333/.407/.625 with a couple homers.

West Michigan finished 2-2 after getting the first three days of the week off due to the Midwest League's All-Star Break. Devon Travis and Jeff Holm continued to show why they were selected as All-Stars, posting wOBAs of .579 and .446, respectively, in the team's four games.

The Connecticut Tigers began their short season in the New York Penn League with a whimper, winning just one of their six games this week. Their issue? A listless offense that has only scored 13 runs so far. Ben Verlander was 4-for-15 with two RBI.

Last week, I copped out by naming two players of the week due to their appearances in the Florida State League All-Star Game. That's still my reasoning for this week's selection -- though I did go through the stats this time -- but West Michigan's Devon Travis gets the nod over fellow All-Stars Jeff Holm and Jose Valdez because he was named MVP of the Midwest League's midsummer classic.