It's amazing the difference a couple months make. When we last saw the Angels, we were in the throes of our only Pacific Coast trip of the season, getting boat raced in a 3 game series against a team with a massive payroll and massive-r hopes for the season. Wonderboy was doing all he could to make sure that the fans knew who the real 2012 MVP was in his mind (note: it was still Miggy and will always be Miggy), and both teams were in third, but while one team looked to be turning a corner, another was getting set for a rocky season.

Fast forward to today, and we now see a very different picture. Josh Hamilton's start in Anaheim can best be described as "abject disaster," the pitching is abominable, and the offense is only middle of the pack, leading to a record 10 games under .500. Trout is having a good year, but when you're only making SportsCenter for hitting for the cycle (which is something statheads HATE, ironically enough) or padding your own stats, its a good indication that the season isn't going the way it should and drinking should commence.

Dark Horse Brewing Company loves two things: free speech and beer. One perusal of their webpage gives these facts away quickly. It takes a bit of renegade-ness to produce solid beer, and this is clearly evident in our latest BOTS: the Boffo Brown Ale. 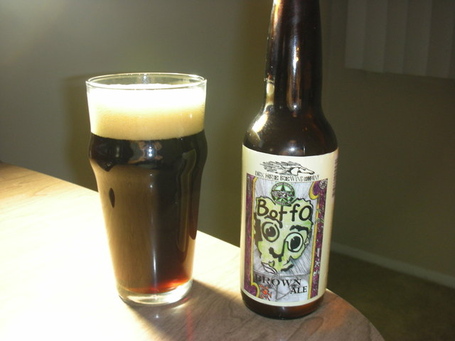 As much as I really can't stand Chris "Mad Dog" Russo, he did once make a good point: every man needs a baseball team and a rock and roll band. I'd like to amend that to say he also needs a good year round dark beer. While I'm a bigger fan of IPAs than anything else, sometimes the mood strikes me for something a little darker and richer. As far as dark beer choices go, you can do MUCH worse than Boffo. That rich blend of caramel, toffee, roasted malt, and smokiness with just a touch of hoppiness at the end and a smooth, clean finish, hitting at about 5 flavors in harmony with each other. Not too much, not too little, just a balanced, flavorful beer ticking all the boxes. Brown ales go well with pizza and barbecue, and at 6.5% ABV you can enjoy a six-pack through the series. Hopefully the closer situation doesn't need to be dealt with for a few days.