Doug Fister will try to save the Tigers from a season sweep at the hands of the Los Angeles Angels while Jered Weaver pitches at Comerica Park for the first time since 2011.

Share All sharing options for: Game 77 Preview: Angels at Tigers

Weaver has only pitched 40 2/3 innings in seven starts due to a broken forearm that sidelined him for almost two months. That said, he hasn't been the same this season. He has a 4.65 ERA/4.60 FIP/4.87 xFIP and 1.328 WHIP, all of which are well above his career norms. A lot has been made of his declining fastball velocity, especially after his last start when Pirates flamethrower Gerrit Cole was throwing off-speed pitches harder than Weaver's four-seamer.

This decline in velocity isn't a one-year trend. His fastball averaged 90-91 miles per hour in 2010 and 2011, but only 88-89 miles per hour in 2012. This season, his fastball is averaging just 87.2 miles per hour. Weaver's command and off-speed pitches are good enough for him to get back closer to his career ERA of 3.28 and 1.149 WHIP. That said, is it something that will change today? Weaver's command hasn't been as good as usual -- he's walking 2.66 batters per nine innings, well above the rates in the 2.1-2.2 range he posted in each of the past three seasons. His fly ball rate and home run rate have increased, and his strand rate is down to a pedestrian (for him) 70%.

These drop-offs could be related to a drop-off in his release point. Across the board, his vertical release points have dropped by 0.2 feet, or 2-3 inches. 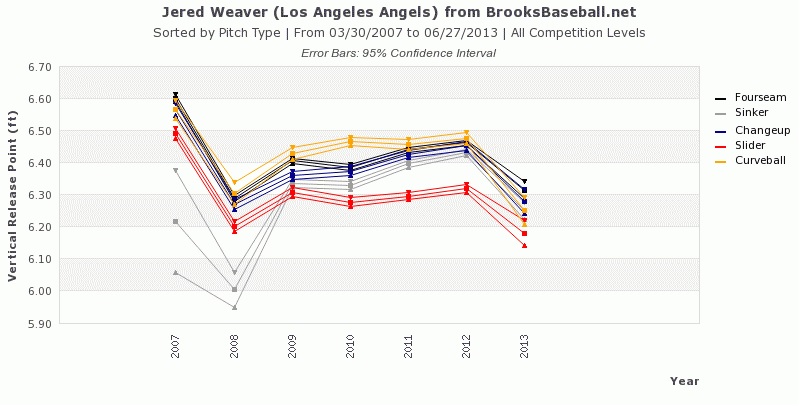 Surprisingly, this hasn't resulted in a change in movement or a drop in velocity in his off-speed pitches.

On the other hand, Doug Fister's PitchFX data from his last start were just... weird. Of the balls put in play against him, those left in the middle of the plate were almost exclusively outs, while the ones at the bottom of the strike zone turned into hits. Death by paper cuts indeed. 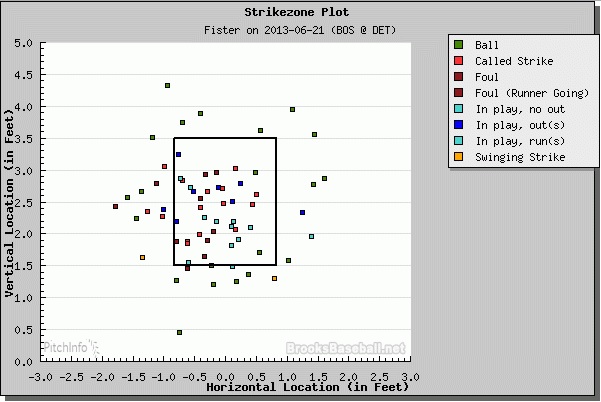 Additionally, his velocity profile suggests that he didn't even start throwing off-speed pitches until the third inning, when the Red Sox started to tee off on him. 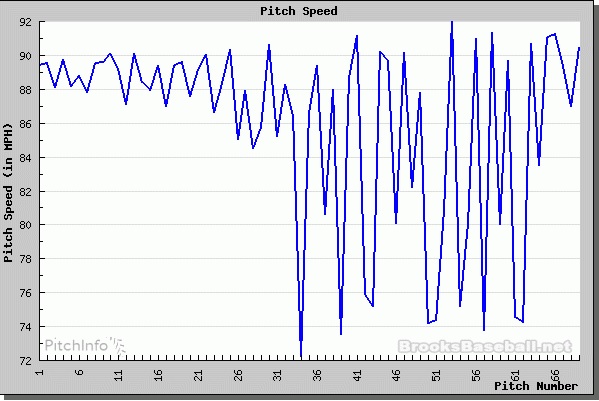 Despite mixing his pitches (from what we can tell), Fister was hit around for six earned runs. It goes without saying that he needs to be better today.

Because our fanbase holds grudges longer than... OK, not going there

Let's get the obvious out of the way now: the last time Jered Weaver pitched at Comerica Park he got ejected for throwing at Alex Avila's head. Regardless of your opinion of these events, they have long since been swept under the rug. Magglio Ordonez and Carlos Guillen aren't even on the team anymore. If you think there will be any sort of retaliation today, I've got a bridge in Brooklyn you might be interested in.

Fister has bounced back nicely from his other poor starts in 2013, allowing a combined five runs in 14 innings after his two starts in which he failed to get through five innings. More importantly, he has gone seven innings each time, something that will be important today to save a bullpen that has logged seven innings in two games at the start of a 20-games-in-20-days stretch. Speaking of tired bullpens, the Angels will be depending on Weaver being the Weaver of old today after using six relievers in last night's contest. If the Tigers can knock Weaver out early, they have a good chance at avoiding a sweep.

They can't go 0-fer against the Angels on the season, can they?