Well, folks, the season is about a third over now. While things haven't gone exactly according to plan, the Tigers are still in a position to win the division. They're actually better off than they were last season, and all the west coast travel is already done for. The issues plaguing the team are fixable, and the team is hopefully turning a corner here soon.

With the Rays coming town, you know exactly what you're going to get: goofy outfits, pitching, fauxbacks, pitching, cerebral managing, pitching, but hopefully, no archery lessons. Since Joe Maddon took over in St. Pete, the Rays have gone from a tie-dyed laughingstock to one of the most consistent teams in the majors, winning 90 or more games four of the last five seasons, playing in the 2008 World Series, and featuring prominently on the wildest final day of the season in recent memory by hitting quite possibly the shortest walk off home run in history. Unfortunately, they play in front of almost nobody in the worst ballpark in the majors. When your celebrity fans feature Hulk Hogan, Dick Vitale, and Rob Stone, you kind of know what to expect.

Kudos do need to be given to the team for its publicity stunt for extricating the satanic influence from the team. In 2008, the Rays featured a campaign to donate money to the Rays Baseball Foundation if you spoke of their former name. While I have no intentions of writing out their former name, here's a picture of Jose Canseco sporting the former duds to laugh at. No, fans, my intention is to point out that North Peak Brewing Company has the ale to pay homage to this former name. I bring you the Diabolical IPA. 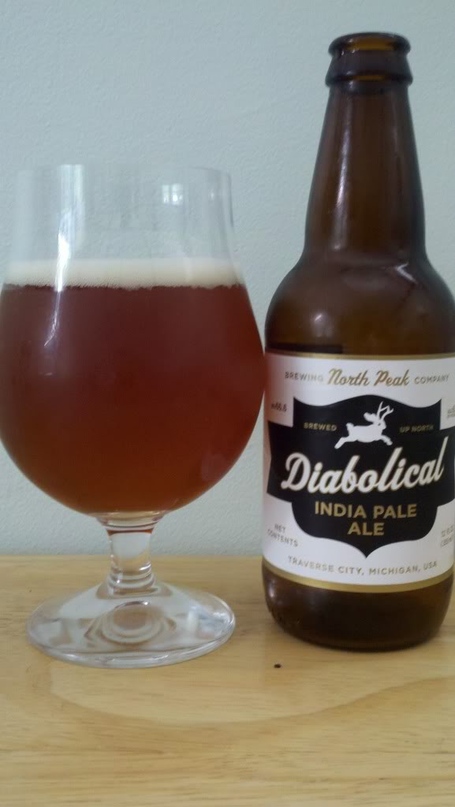 The summer winds bring us IPA season. Crisp, citrusy brews that taste great on the porch, in the bleachers, and with a burger or a brat. The right mix of flavor, hoppy bite, and toasty malt pair perfectly with a warm, sunny day to put a cap on the late sunset. North Peak did things right here, using a sharp blend of hops to announce to the world that you are drinking a hearty IPA. This is a bold, flavorful brew that features all the great characteristics of a solid beer. Both the pine accents and the wheat cereal body are present while the golden color emanates from the beautiful pale malt, and the aftertaste possesses you with a strong, hoppy bite. The cruel intentions of this beer were made known; at 6.6% ABV and 66.6 IBU, you can say that the Devil made you do it when you toast the win with another one.