Doug Fister will look to continue his streak of 13 consecutive scoreless innings tonight against the Tampa Bay Rays. Alex Cobb makes his first start since May 26th for Tampa.

Share All sharing options for: Game 57 Preview: Rays at Tigers

Cobb was scratched from his last start due to a cut on his finger and has not pitched since May 26th. However, he was excellent when he last took the mound, allowing two runs to the New York Yankees in 8 1/3 strong innings. This has been the story all season for Cobb, who, like Matt Moore last night, has only allowed more than three runs in one start. Also like Moore, his strand rate is particularly high, sitting at 86.3% on the year.

Unlike Moore, Cobb's command has been immaculate. He is walking just 1.86 batters per nine innings this season, down almost a full batter from last year. He is striking out 8.25 batters per nine innings, but this number is slightly elevated by the fact that he struck out 13 San Diego Padres hitters in just 4 2/3 innings in one start. He gets his fair share of strikeouts, but relies heavily on ground balls to retire hitters. His ground ball rate in 2013 is 56%, down from the 58.8% he had in 136 1/3 innings last season.

One chink in Cobb's armor is that he has been somewhat homer prone so far this season. While three of the nine home runs he has allowed came at Coors Field, he has still given up four homers in his last four starts. The main culprit has been his four seam fastball, which has resulted in five of his nine dingers allowed. As you might imagine, if he leaves it up in the strike zone, it gets pounded. 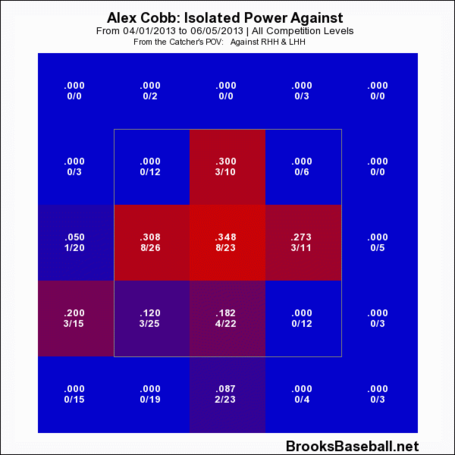 Cobb also has a splitter that he throws roughly 32% of the time, a percentage that increases to nearly 50% with two strikes on a hitter. He also throws a curveball 20% of the time to both righties and lefties, and will use it nearly 40% on the first pitch of an at-bat to fool hitters looking for a first-pitch fastball.

When I went back to watch Fister's last start, the first thing I noticed is that he got into a great rhythm early on. He was working as quick as we have seen this season and did an excellent job of not letting the Pirates slow him down. Add in the fact that he was hitting his spots with all of his pitches and you see why he was able to strike out 12 hitters while allowing just six baserunners in seven shutout innings.

Overall, Fister has bounced back nicely from his poor outing in Texas and horrible first inning in his next start against the Minnesota Twins. He is currently sitting on a streak of 13 scoreless innings pitched with 18 strikeouts and just one walk. The lack of walks and his ability to limit home runs are two of Fister's biggest keys to success in 2013

*Using this fun little website (thanks Purdue engineers), I can actually ask magic 8 ball questions that don't involve being from the U.P.

Cobb's success in 2013 has been built upon his ability to induce ground balls, especially with his splitter once he gets ahead in the count. However, the key seems to be that he can throw his curveball early in the count for strikes to prevent hitters from sitting on his fastball. Keeping hitters off balance like this lets him get to that deadly splitter, leaving hitters with no choice but to pound a borderline strike into the ground. On the other hand, the Tigers are one of the best curveball-hitting teams in the majors, ranking 10.3 runs above average so far in 2013.

That said, the biggest story of tonight's game is whether Cobb's finger will affect his ability to throw all of his pitches. The splitter can be deadly, but neither his fastball nor his curveball are anything special on their own. If he struggles to locate pitches down in the zone, the Tigers will capitalize.

Fister has been victimized by a combination of bad luck and the Tigers poor infield defense in 2013, as opposing batters have reached base 31.4% of the time on ground balls. Given that his ground ball percentage is in the high 50s, this has been an issue for Fister. His success in his last two starts has been largely due to all the strikeouts he has racked up, so it will be interesting to see how he fares against a more disciplined lineup.

Cobb's finger holds up fine, but Fister outpitches him for a Tigers victory.