As a kid, I sent out card to be autographed. Trammell was the first player to send one back. He's been a personal favorite ever since.

Growing up, I'd often hear people lament the loss of their childhood baseball card collection. They had the Mickey Mantle rookie card, maybe Hank Aaron's. Multiple rookie cards. They'd be worth a fortune. In fact, they had all the most collectible cards you could ask for. If only they'd known the value that it would have later, they wouldn't have stuck the Mick in their bicycle spokes and rode pretending they had an engine.

Even in childhood my BS detector shot up with a giant "shyeah, right!" about some older person somehow ruining every single valuable card found in the Beckett Monthly card-value magazine. I also knew the value of investments. At age 11 or 12, when the newspaper came I'd work my way through it diligently. First the sports section, naturally. Then move over to the section with the comics. Finally, the business section. Open that up and start tracking the stocks. That probably sounds unusual to you. My mother tells me I was no different than my grandma. She found value in her afternoon tea, she chased bargains, and she loved to look at the business section and check on her investments. Naturally I knew my sports card collection would be worth a pretty penny or two in the future, and I never used them to make noises with my bike -- OK, never any good players, anyway!

Not pictured: my actual card 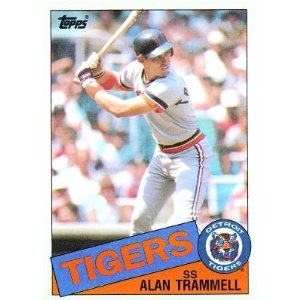 Since I can't find the actual autographed card, here's a look at Trammell's 85 Topps card

Yet today I know where one of my many books of cards is. Where'd the others go? I guess that happens when you move a few times, trying to figure out which college town fits you best. Unfortunately, the book I have lacks for one card that has sentimental value: a late 1980s Topps baseball card signed for me by Alan Trammell. I can't tell you the year -- I think it was 1987, though it may have been 86 and it might have been 88. Around there. I do know it was Topps. I'm not saying that because they're sponsoring our wrap today -- I'm saying it because that was always my favorite brand to collect as a kid.

Some magazine or other had given instructions for requesting major league baseball players' autographs by mail. You needed to write a letter, requesting it. Preferably you're a fan and professing your enjoyment of watching them, but honesty is important. You needed to include a card to be signed. And you needed to send a SASE -- self addressed, stamped envelope. Quite a few ballplayers are happy to sign -- at least for kids -- and it only takes a moment of their time to do that for you. So I sent a couple of cards out to a couple of Tigers, as well as to some non-Tigers who I collected. I had no clue if anyone could read my handwriting but at least they'd know I was a kid.

The day my own awful penmanship arrived on an envelope may have been one of the most exciting in my young life. I opened the envelope carefully -- as careful as I could as a kid. Like my awkward writing, nothing else I did at that age could be mistaken for neat and tidy, either. The card was Alan Trammell's, and it was autographed along with a note with a couple of quick words on a note to thank me for writing. That was even more than I ever expected. Before then I'm not sure if I had any specific favorite player on the team. I liked Trammell, of course. Most people did. I liked Whitaker and Chet Lemon and even Matt Nokes for some reason that probably made more sense at the time. But after that card? It was a no doubter. Trammell was my favorite Tiger. He autographed something for me. That's all I needed to know.

The card was handled carefully, and went straight in a hallowed spot in my favorite card book -- it had a red cover, if I recall, and probably more plastic pages of cards than it should have had. It was pretty thick. But there were a few pages at the back for the special cards I wanted to find easy, and that's right where it went.

So, for any ballplayers or future ballplayers who might be reading: never underestimate the effect of something so small as autographing a card for a kid. You could be making a fan for life. And for any kids out there -- or their parents -- I have one piece of advice, too: Don't lose those cards. They'll probably have some financial value in the future, sure. But it's the sentimental value that really counts.

Topps Archives Baseball is a celebration of the 70s, 80s and 90s, what many consider to be the glory years of card collecting. If you collected Topps Baseball Cards during these years then you will love Topps Archives Baseball. Look for autographs and memorabilia cards from today’s stars and your favorite retired players on classic Topps card designs.