It's not quite the Dog Days of Summer, but we're getting to the point of the season where we're gonna start seeing our divisional opponents for the third or fourth time. As most Tigers fans are familiar with, this means we're going to run into Scott Diamond/Justin Masterson/Luke Hochevar pitching like Cy Young and Pedro Florimon/Alex Gordon/Michael Brantley hitting like MVP candidates.

This week, its the Indians turn to drive to the stadium with their eyes closed cause they've already done it this year. Tito's boys have been better than expected this season and are only 2.5 games back. What is really astonishing is that they're doing it with Ryan Raburn playing an integral role on the team. I'm not a betting man, but I'm pretty sure that this is not going to be the norm and the Indians will realize that they're, well, the Indians.

What is going to for sure happen is at least one game will be close until late when one of the bullpens is a truck fire, then the other bullpen will attempt to out-truck fire them. Drinking will be necessary, and alcohol application will be critical. Dragonmead Microbrewery has just the ticket for you. In honor of one of the finest beer brewing cultures in the world, this series' beer is the Final Absolution Belgian Style Trippel. 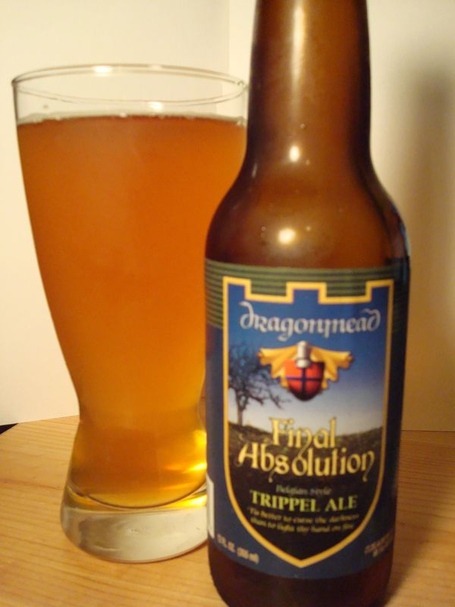 Belgium is one of the giants of the brewing world. One of the uniquities of the Belgian culture, however, is that most of their beers don't shoehorn into specific styles such as pale ale, IPA, amber, or dunkel. The trippel is a mark used by monks in Belgium and the Netherlands to indicate their strongest beer, usually corresponding to about 9% ABV. The modern trippel is akin to the profile of a pale ale, but much more vibrant and flavorful. Clove and spice with a light banana nose are present, but the strong hop profile is very prominent. A trippel will hop longer, so the hoppiness mellows out, imparting the flavor and bouquet without some of the harshness associated with some IPAs. The aftertastes is slightly sweet, but balances the hoppy bitterness nicely. At 8.5% ABV and 28 IBUs, this is the perfect beer to pair with a hearty chicken dinner with all the fixins and the latest walkoff victory.