Justin Verlander picked up his eighth win of the year as the Tigers' offense Papa-proofed a win over the division rival Cleveland Indians.

The Tigers offense knocked out Indians starter Ubaldo Jimenez in the fourth inning, winning the opening game of the weekend series between these two AL Central divisional rivals, 7-5. Justin Verlander pitched seven strong innings to notch his eighth win of the season, and the Tigers extended their division lead to 3 1/2 games over the Tribe.

The Tigers took advantage of a couple of defensive miscues by Indians first baseman Nick Swisher, scoring three unearned runs. Swisher misplayed a routine double play ball in the second inning, throwing into Brayan Pena, who was running to second base on the play. Swisher looked as if he could have stepped on first base to retire Ramon Santiago before throwing to second, but instead did not record an out on the play. The Tigers would later capitalize when Torii Hunter singled and Miguel Cabrera walked with the bases loaded and two outs.

Swisher's second error of the game came in the fifth inning, just after the Indians had cut the score to 5-3. He misplayed a ground ball off the bat of Jhonny Peralta, which allowed Victor Martinez to advance from first to third. Martinez would score on a 6-3 double play off the bat of Pena, extending the Tigers' lead to 6-3.

Victor Martinez and Torii Hunter led the way offensively for the Tigers, notching three hits apiece. Victor was a triple shy of the cycle and scored three runs. Andy Dirks added a couple of hits from the leadoff spot for the Tigers. Miguel Cabrera and Prince Fielder were the only Tigers without hits.

Justin Verlander continued his recent resurgence by holding the Tribe to three runs in seven innings. He allowed seven hits, five of which came in a three-run fifth inning, but only walked one while striking out six. Two of the Indians' hits in the aforementioned fifth inning were infield hits off the bats of Mark Reynolds and Drew Stubbs, respectively. Verlander allowed two baserunners in the sixth, but retired the final five batters he faced, pitching through the seventh inning.

Joaquin Benoit pitched a perfect eighth inning, but Jose Valverde made things interesting in the ninth by allowing solo home runs to Jason Giambi and Drew Stubbs. He retired Nick Swisher on a ground ball to second after allowing Jason Kipnis to reach base. Valverde did not notch a save, but still left many fans and BYB commenters calling for his head after failing to pitch a 1-2-3 ninth inning.

On Verlander: he came out in the first inning spotting his fastball in the low 90s, retiring Bourn and Kipnis in short order. It looked like he pitched around Nick Swisher, as he didn't look to go inside at all. He got the fastball up to 96 miles per hour against Michael Brantley, but still hit his spots, inducing a ground ball to short off the end of Brantley's bat to end the inning. Paul Sporer of Baseball Prospectus had a bit more info on Verlander's recent surge:

@detroit4lyferob Secondary stuff is truly electric. Slider might be even better than curve of late.

Verlander scuffled a bit in the middle innings, but he was also charged with an extra run thanks to Hunter's misplay on Kipnis' RBI double. Additionally, the three hits that loaded the bases before Bourn's RBI single to break the shutout were of the #TwinsHit variety. The curveball was sharper and the fastball location was miles better than the last Verlander start I watched two weeks ago.

Something doesn't seem right with Andy Dirks. He's not hurt, as evident by a nice running catch in the top of the third inning, but he is not seeing the ball well at the plate. His at-bat in the bottom of the third with the bases loaded was not pretty. In particular, he should have hammered a 2-0 fastball that was right down the middle. Instead, he fouled off the pitch, then swung through an equally-fat splitter at the top of the strike zone on the very next pitch.

Of course, after I wrote that last paragraph, he squares up a pitch nicely for an RBI single up the middle (with a fortuitous bounce off second base, to be fair). He also had a nice swing on a single in the eighth inning. Still, I'm not a fan of what I'm seeing.

New proposition: give johnmoz Shannon Hogan's job. John was on the scene giving us the cold hard facts.

Bases loaded, one out and idiots try to start the wave.

Miguel Cabrera's bases loaded walk in the third inning was his 67th RBI of the season. He is now on pace for 184 RBI, seven short of Hack Wilson's record.

Rod-ism of the night (as Mario and Rod were discussing a possible cycle for Victor Martinez):

Mario: Even if he hit it to triples alley?
Rod: Negative.
Mario: It would have to bounce around the walls a couple times.
Rod: And Bourn, Stubbs, and Brantley would have to fall down.

Shannon Hogan got into the act when she got video-bombed by Charley the Singing Hot Dog Man during a segment. 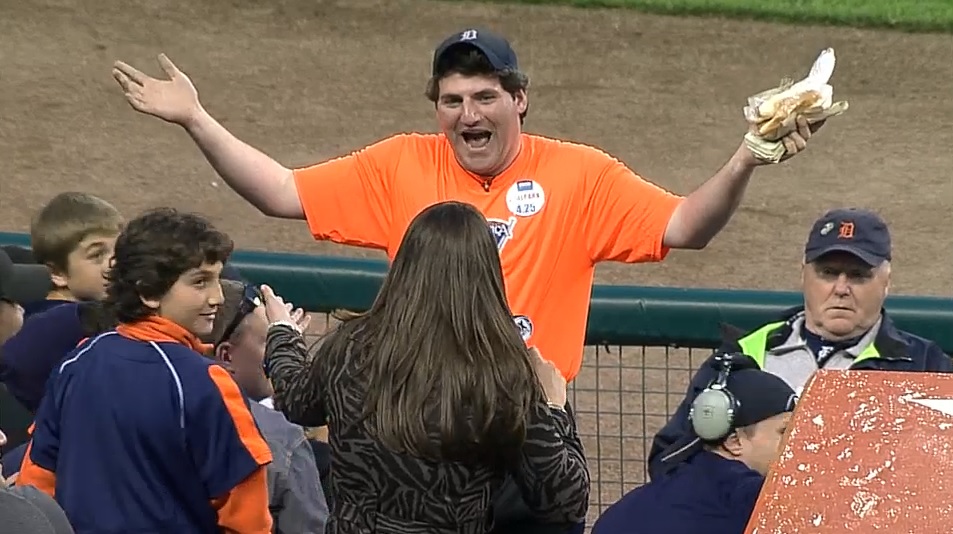 Martinez scorched a fastball down the first base line for a double in the seventh inning, his third hit of the game on four hard-hit balls. His home run was an absolute bomb, and he kept his hands back nicely on an opposite-field single in the fifth. He's back.

Valverde seems to be alternating between decent and "extremely flammable." He was the latter tonight, and there was no "too cold to throw the splitter" excuse to be had, as Stubbs' home run was off a hanging splitter.

Victor Martinez: He was a triple shy of the cycle and hit the ball hard four times. He is now above the .240 mark -- hitting .241/.289/.355 on the year -- and has homered in two straight games. Also scored three of the Tigers' seven runs tonight.

Justin Verlander: A third consecutive outing of seven innings pitched with three runs allowed for the ace. Other than one rough inning, he was his normal self tonight.

Torii Hunter's bat: Hunter had three hits, including a two-out infield single that gave the Tigers a 2-0 lead at the time.

Torii Hunter's glove: The fly ball that caromed off of Hunter's glove only cost the Tigers one run, but it was a play that a nine-time Gold Glover should have made.

Prince Fielder: 0-for-4 on the night, though one was a long fly ball that died at the warning track in left field.

Jose Valverde: Made things a bit tighter than most fans wanted by allowing the tying run to come to the plate in the ninth inning. Thankfully, Nick Swisher also had a game to forget.

GAME 58 PLAYER OF THE GAME:

Max Scherzer continued the run on starting pitchers, garnering 74% of the BYB Player of the Game vote.