With only one series to go before the All Star break, the Tigers look to be welcoming a few days off with open arms. A few key players are injured or need a break, and the Jekyll and Hyde bats need to take some time to figure out how much hitting they really want to do. Yesterday's meltdown could still have repercussions as well, so suspensions could await some individuals after the break. Needless to say the record is not where we thought it would be, but 50 wins before the break is nothing to sneeze at, as the team will likely be in first place. However their record would only be good enough for fourth in the vaunted AL East, and considering the seasons Max Scherzer and Miguel Cabrera are having, one wonders where this team could be without those two.

The Texas Rangers come in a game behind the surprising Oakland Athletics with some questions of their own, but timely hitting, solid pitching, and nine games against the Astros have them once again near the top of the AL West. This weekend's matchup is one that several pundits picked before the season ans a possible ALCS preview. I now have flashbacks to 2011 and need to drink something.

This post highlights the offerings from the brewery in my birthplace, Midland, MI. The Midland Brewing Company has only been around for a few years, but has already churned out some great stuff, including their flagship brew, the Copper Harbor Ale. 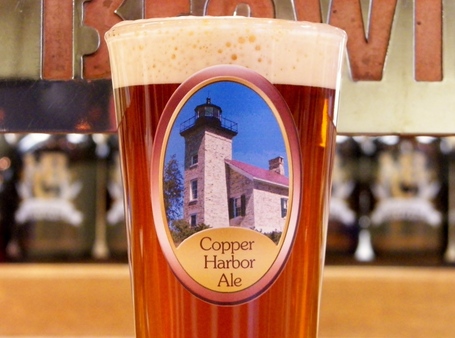 The Copper Harbor Ale has an absolutely beautiful copper-amber color thanks to the loads of amber and caramel malts. The beer has a nice toasty taste to go against a smoother citrus hop nose (think Sam Adams Boston Lager crossed with Bell's Two Hearted) that finishes off slightly sweet and well balanced. The rich, creamy head leaves a beautiful lace on the glass as well, allowing you to track your progress and keeping the aroma near the top of the beer in your nose (remember, 90% of taste is smell). Try this delectable brew with some spaghetti and meatballs and garlic bread, and at only 5.3% ABV and 26 IBU, you'll be able to drink this all weekend as we hopefully lay one on the Fightin' Ron Washingtons.