Max Scherzer and Derek Holland will face off in a "nationally" televised game tonight on Fox.

Share All sharing options for: Game 93 Preview: Rangers at Tigers

Derek Holland has logged nearly 700 career big league innings -- all with the Rangers -- but has never pitched at Comerica Park. He faced the Tigers earlier this season in Arlington, allowing four runs on eight hits in 4 2/3 innings in that Sunday night matchup where Cabrera hit three home runs. Since then, Holland is 4-2 with a 3.07 ERA, 2.81 FIP, and 60 strikeouts in 58 2/3 innings. He has only allowed four runs in those nine starts, three of which came in their launchpad of a home ballpark.

Holland's ability to keep the ball in the park has been one of the main differences in his success this season. He is allowing line drives at a much higher rate this year -- with a subsequent rise in BABIP -- but his home run to fly ball rate has dropped by nearly 9%. So why aren't we screaming "regression?" Holland's strikeout rate has jumped by over a batter per nine innings, and his walk rate has declined slightly. He is throwing more first pitch strikes as well.

Another reason for Holland's improvement is ability to slow down right-handed hitters. Last season, righties slugged .477 against him. This year, that number is down to .388. It may not be the entire reason for his improvement, but his changeup has been much better against righties in 2013. Last year, righties slugged a whopping .806 off the changeup. He has nearly cut that average in half in 2013, down to .412.

Max didn't seem very sharp in his last start, but he still allowed just two runs in seven innings while striking out seven. If Lonnie Chisenhall doesn't golf a low changeup through a hole in the infield, Scherzer may have gone seven shutout innings. He might not quite be there yet, but Max is slowly approaching Verlander territory -- even when he's not at his best, he's still one of the best pitchers in baseball.

Our friends from Lone Star Ball pointed this out yesterday 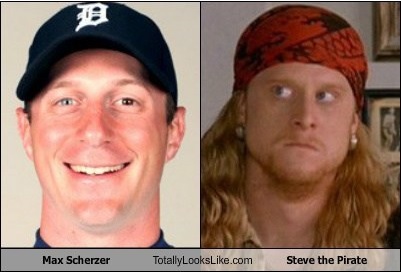 If the Rangers are going to pick up a win tonight, Holland needs to be much better than he was against the Tigers back in May. He caught way too much plate in that start, especially when pitching to the MVP. 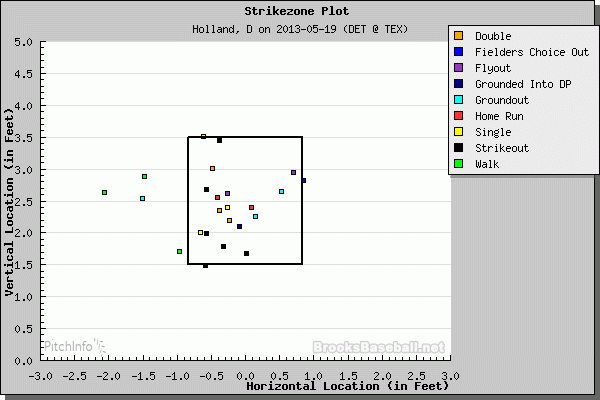 If he can continue to work both sides of the plate and miss bats -- his swinging strike percentage this season is 10.6%, well above his career norms -- then he should last longer.