The Rangers handed Tigers starter Justin Verlander the worst start of his career back in May. Can Verlander bounce back today? Martin Perez will start for the Rangers.

Share All sharing options for: Game 94 Preview: Rangers at Tigers

Perez is a 22 year old lefty who was expected to start the season in the Rangers' rotation, but a fractured left forearm sidelined him at the beginning of Spring Training. He made six starts at Triple-A Round Rock before being called up, winning five of them with a 1.75 ERA -- no small feat in the notoriously hitter-friendly Pacific Coast League. A consensus top 100 prospect for the past few seasons, Perez has gotten off to a good start in 2013. He has slowed down a trio of hot offenses in St. Louis, Cincinnati, and Baltimore to pick up his three big league wins.

Perez's strikeout rate is extremely low at this point, but he's no finesse lefty. His fastball averages 93-94 miles per hour, and he struck out 7.6 batters per nine innings in the minors. This still doesn't tell the whole story, however. Perez struck out over a batter per inning in 2010 in Double-A... as a 19 year old. Perez's best pitch is his changeup, which has been a whopping 6.0 runs above average per 100 pitches this year. He is limiting right-handed hitters to a .259 average and .376 slugging average this season.

This season, he is relying on a 50% ground ball rate, a 79.1% strand rate, and a bit of luck. His BABIP is close to league average at .305, but he has a line drive rate of 28.3% through five starts. If he can continue to limit home runs -- he allowed 0.7 homers per nine innings in the PCL last year -- then he should be fine when his batted ball rates stabilize.

Unfortunately, whatever mechanical faults Verlander fixed in Toronto didn't follow him back to Comerica Park. He allowed a season-high 12 hits to the Chicago White Sox while only striking out three batters. If you're looking for silver linings, he still pitched seven innings and only walked one batter. His command was still an issue, though. Instead of missing off the plate, however, he was missing up in the strike zone. 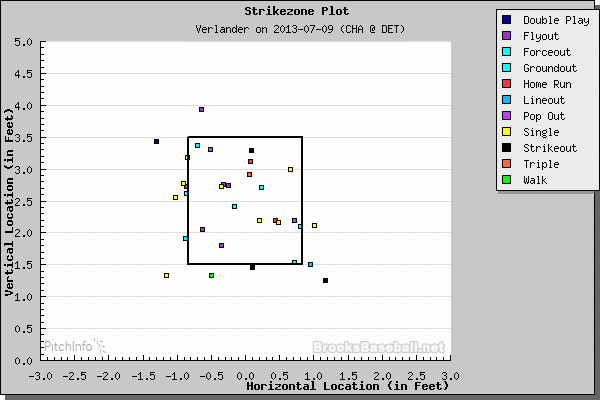 The last time Verlander took the mound against the Rangers, things didn't go too well. Over the course of his career, the Tigers' ace has been much more ace-like. He is 7-3 with a 2.92 ERA in 12 starts against the Rangers and has struck out 77 batters in 74 innings. It will be important for Verlander to find his rhythm today prior to the All-Star Break, even if he isn't pitching in the midsummer classic.

The Tigers offense gets to Perez and backs Verlander's 10th win of the season.