The Tigers were able to salvage a winning record this week by taking two of three games from the Texas Rangers. They head into the All-Star Break with a 1 1/2 game lead in the AL Central.

The Tigers came into this week having won five of their last six games, including two of three against the Cleveland Indians. They were set to play their final seven games in a 20-games-in-20-days stretch prior to the All-Star Break, with the last six coming at Comerica Park.

Things got off to a shaky start on Monday when Max Scherzer allowed a two-run single to Cleveland's Lonnie Chisenhall just after a short rain delay. The Tigers tied the score before Scherzer left the game, leaving his perfect record intact. They were then able to scrape across a couple of runs in extra innings to leave with a 4-2 win and 3-1 series victory over the Tribe.

The Tigers and White Sox hadn't played each other for almost 300 days when Chicago came into town on Tuesday, but the White Sox looked as if they had seen Verlander pitch them batting practice everyday. The Pale Hose scored five runs off Verlander and then feasted upon the Tigers' bullpen, coming away with an 11-4 win in the series opener. The Tigers came back behind a strong effort from Rick Porcello to take the second game of the series. 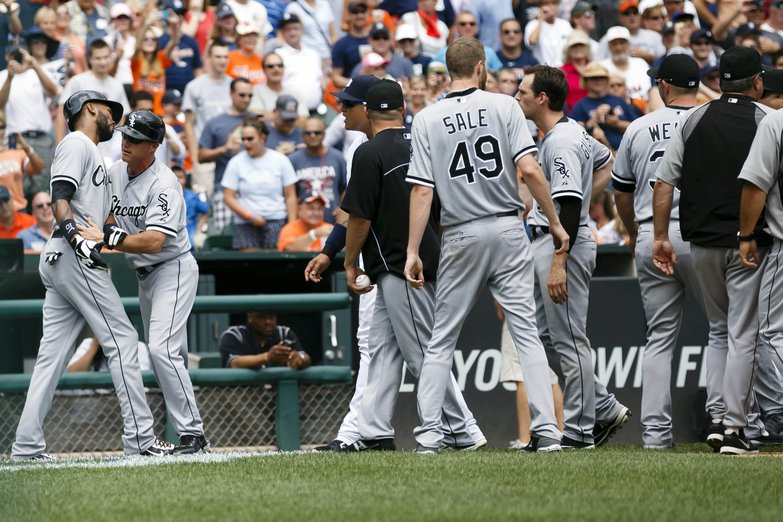 The rubber match of the series featured quite the pitching matchup: All-Star lefty Chris Sale against should-be All-Star Anibal Sanchez. Both starters were shakier than usual, but the real fireworks started when a Sale fastball sailed too close to Prince Fielder's head for comfort. Sale claimed innocence, but the Tigers weren't too pleased with the timing -- Sale's errant pitch came directly after a solo home run from Miguel Cabrera. Luke Putkonen threw behind Alexei Ramirez later in the game, and the benches cleared. Putkonen and Jim Leyland were ejected, and the White Sox bullpen held on for a 6-3 win.

After the dust of the previous series settled, the Tigers welcomed the Texas Rangers into town. Justin Grimm continued to struggle, allowing seven runs in the first two innings of the Tigers' 7-2 win in the series opener. The Tigers offense wasn't as successful the next night, only scoring one run with Scherzer on the mound in search of his 14th win of the year. As you might expect, that wasn't enough support for Max, resulting in his first loss of the season.

The Tigers finished off the week on a high note, shutting out the Rangers behind seven innings of one-hit ball from Justin Verlander. Verlander's fastball command was still an issue, but his off-speed stuff was otherwordly, keeping the Rangers hitless for 6 2/3 innings. The Tigers now head into the All-Star Break 10 games over .500 and 1 1/2 games ahead of the Cleveland Indians.

Batter of the week: Victor Martinez

Most of us expected Martinez to get hot at some point, but daaaaaaaang. Martinez not only hit .444/.483/.667 with five runs scored and six RBI, but he didn't even strike out until Saturday night's game. He raised his batting average from .242 to .258 just this week. His bat gives the middle of the Tigers order some serious teeth, especially when he's hitting like this. Honorable mention goes to Matt Tuiasosopo for hitting three home runs in 14 at-bats and driving in a fourth run on Sunday afternoon.

Pitchers of the week: Joaquin Benoit and Drew Smyly

The two-headed monster at the back end of the Tigers bullpen kept on rolling this week. Smyly and Benoit combined for 7 2/3 scoreless innings with five hits allowed and 10 strikeouts. Benoit picked up two saves, while Smyly's win on Monday improved his season-long record to a perfect 4-0. 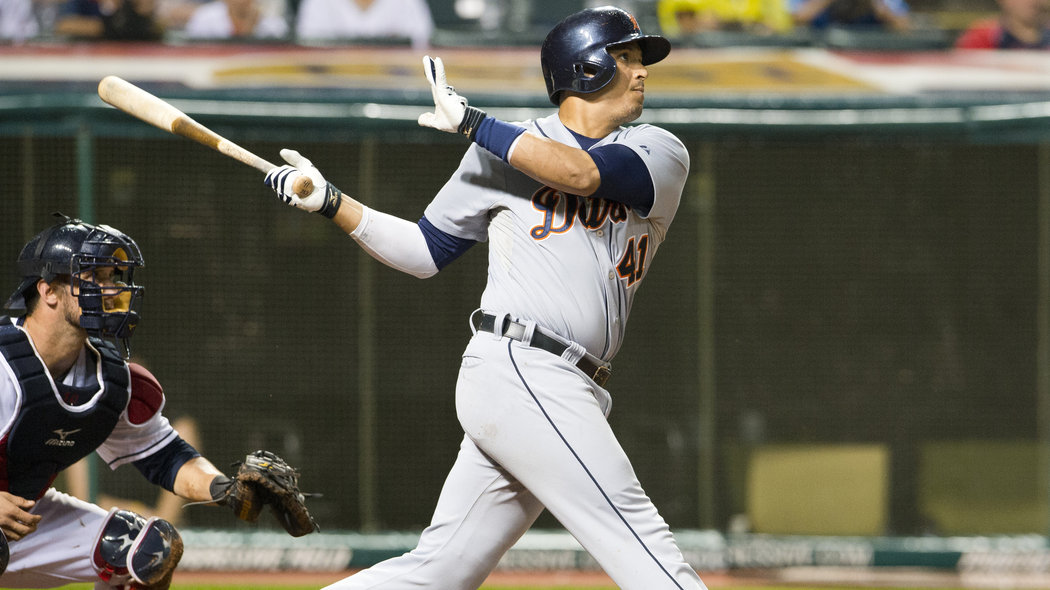 The Tigers won a rainy extra inning affair in Cleveland to take three of four from the Tribe.

The All-Star Game might be fun for some people -- I said might be, lay off -- but for the rest of us, the lack of baseball from Monday through Thursday is completely agonizing. After that, the Tigers will travel to Kansas City for a three game weekend series against the Royals.

The Toledo Mud Hens won a pair of laughers this weekend -- 10-0 on Saturday and 11-3 on Sunday -- to salvage a 3-4 week. They had only scored 11 combined runs in the five games prior to the two 10-spots this weekend. Their 41-58 record leaves them in last place in the West Division of the International League, a whopping 20 games behind first place Indianapolis.

Double-A Erie went 3-2 this week in a short week thanks to the Eastern League All-Star Game. The SeaWolves are 48-44 overall, 2 1/2 games behind Harrisburg in the Western Division.

High-A Lakeland went 5-3 this week, but won five of their final six games this week after being swept in a doubleheader on Monday. They are 10-11 during the second half of the Florida State League season, 4 1/2 games out of first place.

The Connecticut Tigers of the New York-Penn rookie league finally found their groove this week, winning five of their seven games. They are 11-16 overall and in last place in the Stedler Division.

The GCL Tigers of the Gulf Coast League went 4-3 this week, improving their season-long record to 11-5. They are in first place in the Northeast Division.

Alvarez pitched a pair of gems this week for Triple-A Toledo, allowing just three runs in 15 innings. He only picked up one win, but was instrumental in a pair of Mud Hens victories. Alvarez is 6-4 with a 2.72 ERA for Toledo this year, including a 1.80 ERA and 0.73 WHIP since being sent back to the minors.