The Tigers have their work cut out for them today, as they try to avoid a sweep at the hands of James Shields and the Royals. Doug Fister starts for the Tigers.

Share All sharing options for: Game 97 Preview: Tigers at Royals

When the Royals traded for Shields, there were questions about whether he could be the ace of a pitching staff. He answered those question emphatically in the first half, putting together an All-Star caliber season despite getting almost no run support whatsoever. Case in point: Shields was 0-4 in May, but had a 2.92 ERA and 3.4 strikeout-to-walk ratio in 37 innings. The trade itself looks just as bad in hindsight as it did at first glance -- especially when you look at Wil Myers' numbers -- but Shields has held up his end of the bargain.

Shields has faced the Tigers twice already this season, allowing just five runs in 15 innings. He changed his approach slightly from the first start to the second, throwing his curveball and cutter more often against the Tigers in June than he did in April. He typically mixes all of his pitches well, but has been throwing his two-seamer and cutter more often this season. Opposing batters are hitting .433 off the two-seamer with a .537 slugging average.

Perhaps the most impressive factor of Shields's success is that he has thrived despite a significant drop in his strikeout rate compared to 2012. He isn't warranting as many bad swings -- opposing hitters are swinging at 29.9% of pitches outside the strike zone compared to 34.2% last season -- and his first pitch strike percentage is down. He is allowing more line drives and fly balls and is stranding a few more runners compared to years past, but there's no reason to think that he's due to regress in the second half based on those figures.

Fister looked pretty good in his last start against the Texas Rangers, allowing two runs in six innings. He wasn't quite his usual self, inducing just eight ground balls compared to 12 fly balls. However, his outing came at a crucial time, giving the Tigers a much-needed win after dropping two of three against the Chicago White Sox. He all but ditched his cutter in his last start, only throwing it nine times. It is by far his worst pitch, according to PitchFX*. He got back to basics, throwing 53% fastballs and keeping the ball down in the zone. 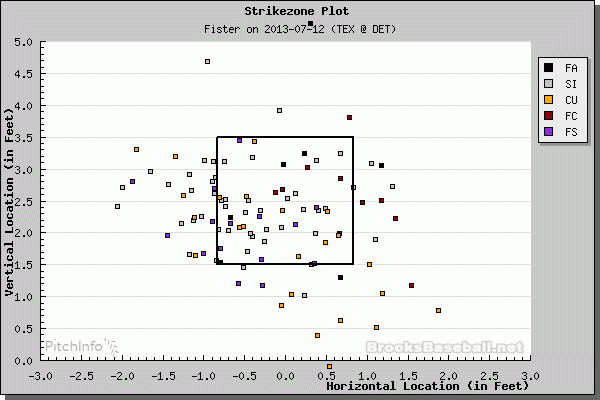 Both of the Tigers' losses against Shields this season came at the hands of the bullpen. Between Bruce Rondon's MLB debut and Jose Valverde's last minute meltdown, they have been much closer to handing Shields a loss than the stats would indicate. The offense hasn't been terribly impressive against him, but there are a bevy of teams that have been in the same boat against him in 2013. Meanwhile, Fister's only start against the Royals this season was a complete game loss. If he continues to pitch well and the offense can scrape together a few runs, the Tigers might be able to salvage a win.

Shields leads the Royals to a sweep.