First off, a quick note: In the last "Beer of the Series" post, reader Keith-Allen went out and partook in a Build-Your-Own Six Pack of some of the prior BOTS beers. I invite you to read his thoughts on the matter. This is a great way to learn about these beers, and kudos to him for jumping in head first.

The Tigers make their first trip of the season to Chicago's south side. While the standings show these teams at opposite ends of the division, the last series showed that these games are always close and interesting. The White Sox have the ability to hit the ball with aplomb at the drop of a hat, and despite the defensive woes, the pitching at the top of the rotation is solid. Throw in the fact that one guy we've never heard of will find a way to dominate us for a game (the last series, the memorial Tiger Killer Award went to Josh Phegley), and these games are usually headache inducing to the nth degree. Hopefully the bats are packed for this trip, because they will be needed.

As for the beer, the Second City has got a nice scene going. The standout brewery is Goose Island, which, along with the Boston Beer Company, Leinenkugel's, and to a lesser extent, Bell's, has gained quite a bit of national notoriety. Recently, Goose Island was purchased and dumped under the Anheuser-Busch umbrella (both Anheuser-Busch and Miller-Coors have been snatching up craft breweries for marketing purposed over the last few years). However, despite their Honker's Ale and 312 being dumped on us en masse, they have some fantastic small batch vintage Belgian style stuff including the choice for this series: Matilda. 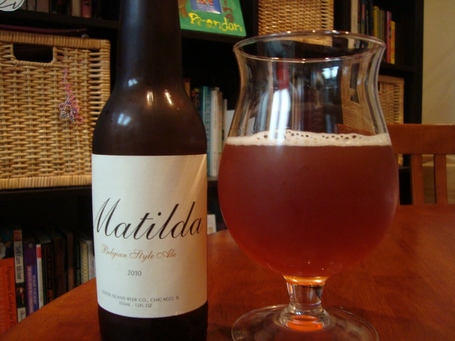 To most beer drinkers, Belgium is held in high esteem. The Belgians (despite their highly inefficient government and self-loathing) know how to make a beer and have been doing it for quite some time. Unfortunately, the only Belgian beer most Americans know is Stella Artois (which is derisively known as Frenchweiser, and for good reason: it's crap). Matilda is crafted after a much better Belgian beer: the Belgian Pale (find an Orval or a Westvleteren and see what the good stuff REALLY tastes like). The caramel and candy sugar malts (yes, there is a malt called candy sugar, and it's awesome) are evident in the golden amber color and the rich, fervent toasty aroma, while the hopback cleans and dries the palate, leaving just enough flavor to leave you wanting more. Not too overpowering, perfectly balanced, and a wonderfully complex flavor profile that even a novice can appreciate. The apricot and coriander flavor allows this beer to pair wonderfully with most seafood and pasta dishes, and at 7% ABV and 26 IBUs, it makes at great beer to sip, savor, and suffer with during the game.