The mysterious 2013 season of Justin Verlander added another strange chapter as the Detroit Tigers fell to the Chicago White Sox 7-4.

Verlander (10-8) was rocked for 11 hits and seven runs in six innings, raising his season ERA to a completely unexpected-unprecedented-uneverything 3.99. Verlander hasn't had an ERA above 3.00 since 2010 and has only been north of 4.00 once, in his career worst 2008 season.

Rumored to be on the trading block, winning pitcher Jake Peavy made his case to be picked up by a contender. He allowed just three hits and three runs, striking out seven while pitching into the eighth. Addison Reed tossed a scoreless ninth to earn his 26th save.

Quieted by Peavy for most of the game, all the Tigers' scoring came via the home runs off the bats of Torii Hunter, Victor Martinez and Brayan Pena.

As for injured superstar Miguel Cabrera, manager Jim Leyland hopes he can play in their next series.

Jim Leyland said he hopes Miguel Cabrera can play Friday but that he's not going to do anything stupid.

When asked about his status, Cabrera declined to comment. I wouldn't want to talk after losing to the White Sox either.

Verlander struggled (and was victimized by some bad luck and defense) in the first inning, the White Sox rallying with two outs to put the Tigers in a 2-0 first inning hole. The Tigers would find themselves digging for the remainder of the game.

One down, Alexei Ramírez bounced a single through the left side, then easily stole second with two out. Adam Dunn reached a true outcome by drawing a walk. Paul Konerko's RBI single to center plated Ramirez. Jeff Keppinger followed with a flair which dropped in front of Torii Hunter in right, which he brutally misplayed. The ball rolled past Hunter, Dunn scoring. For some odd reason, Kornerko was sent home and was thrown out by eleventy-billion feet, saving further damage and ending the inning. Keppinger credited with a single, Hunter an E-9.

Verlander immediately found himself in more trouble in the second inning. Conor Gillaspie led off by doubling off the left field fence over the outstretched arm of Andy Dirks. Then Justin Verlander remembered he's Justin Verlander, retiring the next three White Sox in order, two by strikeouts.

The Tigers had their first base runner of the game in the third, Brayan Pena walking with one out. He was quickly eliminated off the base paths when Ramon Santiago bounced into an easy 4-6-3 double play.

More sloppy defense got Verlander in trouble in the third, but some good D got him out of it. Alex Rios dribbled a single through the right side with one out. The shift on Dunn, he sent a ground ball to Don Kelly, now stationed at shortstop. His throw pulled Fielder off the bag, but what was originally scored E-5 was changed to a gift single for Dunn.

Verlander then took a big chance, but it got him out of the inning. He fielded Konerko's swinging bunt, but instead of going for the sure out at first, Verlander stopped, turned and fired on-target throw to second. Jhonny Peralta was able to complete the 1-6-3 double play, throwing out Konerko, the slowest man in the world.

Jake Peavy has faced the minimum through three innings. Austin Jackson ended that streak, leading off the fourth with a single. The count 3-2 on Hunter, the hit and run was called. Hunter got his bat on the ball ... and sent it over the center field fence. Hunter's third home run of the series and tenth of the season knotted the game at 2-all (MLB.com video).

Peavy would avoid further damage in the inning, but the Tigers did do damage to his pitch count. He entered the fourth at 41 pitches, ended the inning at 68.

Another inning meant another White Sox threat. A hittable Verlander and more sloppy defense led to the White Sox retaking the lead.

Bad things happen when you walk the lead off man. Verlander issued one to Gillaspie, and it was downhill from there. Viciedo followed with a seeing eye single to center. Then came a combination of a dumb pitch and bad defense. Verlander was blowing high 90s fastballs past number nine hitting Tyler Flowers, who entered the game hitting .203. For some reason, Verlander then tried to sneak a low 90s slider past Flowers. He hit the ball on a line, but it should have been caught by Dirks. It wasn't, Gillaspie scored and the homer official scorer gave Flowers a gift RBI double.

Still two out, Verlander had trouble shutting the door. Runners on second and third,. Ramirez came through with a two RBI single. Jackson airmailed the cut off on the throw home, allowing Ramirez to advance to second. That boneheaded throw cost the the Tigers another run, as Rios' single was now able to plate Ramirez.

What had been a 2-2 tie had become a 6-2 White Sox lead. When all was said and done, the White Sox had scored four runs on four hits, a walk and three mental errors by the Tigers (Verlander's pitch, Dirks' non-catch and Jackson's throw).

"You can sum up pretty simple." "In the fourth inning, he made bad pitches in bunches." -Jim Leyland on Justin Verlander

Verlander finally settled down, tossing his first 1-2-3 inning of the game in the fifth. But it was only a temporary reprieve Verlander.. Flowers had a legitimate hit in the sixth, legitimately hitting solo home run, drilling Verlander's arrow straight low 90s fastball into the White Sox bullpen. Flower's ninth home run of the season made it 7-2 White Sox.

Not that Verlander's issues with the White Sox make much difference when you don't hit. The Tigers could do little against Peav,y, managing a mere two hits through six. The Tigers did get one run back in the seventh, Victor Martinez hitting his ninth home run of the season. The solo shot pulled the Tigers to within four at 7-3 (MLB.com video).

But ir seemed the Tigers had all but thrown the white flag, Evan Reed replacing Verlander for the seventh. Lost somewhere in the back of the bullpen, Reed was pitching for the first time since July 11. Surprisingly, the last man in the pen pitched well, allowing just one hit and no runs in two innings of work. But it was too little, too late, too deep of a hole.

The score still 7-3, Robin Ventura tried to get one more inning out of Peavy, allowing him to start the eighth. Bryan Pena ended any thoughts of Peavy pitching any further, drilling a lead off home run to right. Pena's third homer of the season made it a three run game at 7-4 (MLB.com video).

Ventura would call on right-hander Matt Lindstrom, who would strand Jackson at second (reached base via a Dunn error) to end the inning.

The game a save situation thanks to Pena's home run, White Sox closer Addison Reed took over in the ninth. He proceeded to make things semi-interesting, bringing the tying run to the plate in Pena by allowing a two out single to Peralta and walking Kelly. With Matt Tuiasosopo on deck, Pena struck out to end the game.

Game over. Your final score is White Sox 7, Tigers 4.

The White Sox salvage the final game of the series, snapping the Tigers' winning streak at four games. Well, you can't expect to win when your starter is rocked for seven runs in six innings. They entered the day hoping for a sweep, but the Tigers ended up taking 3-of-4 and 4-3 on the road trip. I'm sure they'll take it, even though the Tigers leave Chicago with a bit of a sour taste in their mouth thanks to Verlander's poor performance.

With the loss, the Tigers drop a 1/2 game to the Indians, who had the day off. Their record falling to 56-45, the Tigers lead in the Central currently stands at three games.

The Tigers return from a successful road trip to start a nine game home stand, six of which are of the interleague variety. The Phillies arrive for a three game weekend series, leading off with left-hander Cole Hamels (4-12, 4.16 ERA) facing Doug Fister (8-5, 3.90 ERA). Hamels got off to an awful start to the season, but is 2-1, 2.57 in four July appearances. Fister has been a pitcher of extremes of late, either getting pounded or doing the pounding. His last start Fister's last start was his best in a month, beating the Royals by allowing one run in six innings. First pitch at Comerica is set for 7:08 PM.

Here's your daily reason to take sports talk radio with a huge grain of salt.

Heard that #Tigers Castellanos was the asking price for Francisco Rodriguez, who went to the #Orioles instead - in that case, good non-deal

Some hosts on WXYT were quite unhappy with Dave Dombrowski for not getting in on the K-Rod sweepstakes. It's all about context, which sports talk radio is often sorely lacking.

The White Sox were in their 1983 softball throwback uniforms, as modeled here by Jeff Keppinger. 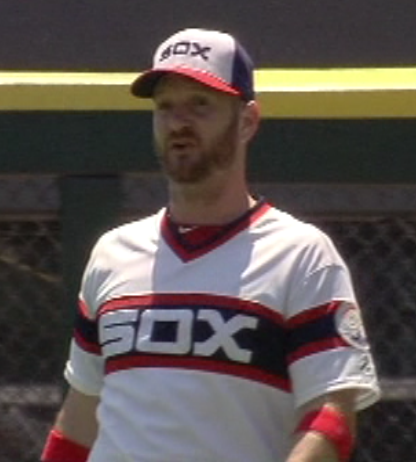 Makes you appreciate the Tigers' classic look all the more. 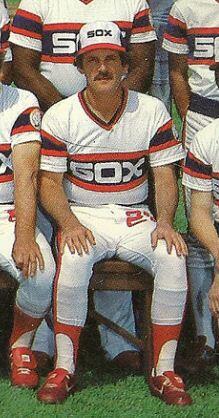 Another game, another missed call. In the second inning, Prince Fielder had already crossed the first base bag when Conor Gillaspie's throw from third arrived. Umpire Bruce Dreckman waited a beat, then called Fielder out. A short argument ensued, but as always, the human element overrules all.

Torii Hunter's home run was number ten of 2013. It also gave him 13 consecutive seasons of double digit homers. Hunter's career high in home runs is 29 in 2002, a broken ankle ending his season in July of 2005 led to his low of 14.

Rod Allen's man crush of the day is...

Brayan Pena's Tater Tot Tracker number was spectacular, needing just 17 seconds to sprint around the bases after going yard in the eighth.

I like to picture Pena making "vroom" sounds during his HR sprints.

The White Sox just couldn't go one full game without committing an error. Adam Dunn outright dropped a throw at first base, charged with their eighth error of the series.

As the game wound down, there was breaking news (if you can even call it that) in regard to an ex-Tiger.

Injuries are becoming an issue with Miguel Cabrera, Omar Infante, Darin Downs, and now Hunter, banged up (and let's not forget the still on the 60-day DL Octavio Dotel). Hunter looked to have injured himself while batting in the top of the eighth, left the field gingerly after bouncing out and did not return to the game. The Tigers are calling it a sore left Achilles and is considered day-to-day. Post game, Jim Leyland didn't have anyhting more to add about Hunter's issues, other than he was wearing new shoes. Hunter was more upbeat, saying his injury wasn't serious and expected to be in Friday's lineup.

The Tigers already had Verlander under control through 2014 when they tacked an extra $140 mil on to his contract. They could have waited.

Brayan Pena: His sprint around the bases put a smile on my face for one of the few times on the afternoon.

Torii Hunter: Left the game with a leg injury, but did hit his third home run of the series when the game was still in doubt.

Evan Reed: Hadn't pitched in two weeks, but came through with two scoreless innings of relief.

Justin Verlander: Just as the Angels are to Rick Porcello, the White Sox are to Verlander.

Justin Verlander has allowed 23 hits and 12 runs, all earned, in his last 13 innings against the #ChiSox.

Team defense: The Tigers didn't help their chances at a victory thanks to some very iffy glovework. Despite being charged with only one error, they could have easily been given at least two more.

Anibal Sanchez received both run support from the Tigers' offense and the support of BYB readership, his quality start earning him a PotG win with 56% of the vote.