A short-handed Tigers were missing three regulars, but rode Alex Avila's two RBI double and the right arm of Doug Fister to victory.

A brilliant Doug Fister pitched a Detroit Tigers to a 2-1 victory over the slumping and punchless Philadelphia Phillies. Fister was in beast mode, the offensively deficient Phillies and their inability to do much with the bat helped. They have scored just ten runs in their last six games, all losses. The Tigers won despite missing three starters due to injury, Miguel Cabrera, Torii Hunter and Omar Infante.

Fister (9-5) scattered three hits, holding the Phillies to one unearned run, striking out six over eight innings. Closer Joaquin Benoit stranded a runner in scoring position to record his tenth save in ten opportunities.

Despite pitching well enough to win most games, a bad season for Cole Hamels (4-13) got worse. Hamels fell victim to a lack of run support and the Tigers bunching the majority of their hits together in the fifth inning. Hamels allowed six hits (three in the fateful fifth) and two runs, walking three, striking out six in seven innings of work.

The two teams combined for just nine hits, six by the Tigers and three for the Phillies. The only offense to speak of from either side came in the fifth, Alex Avila's two RBI double driving in Hernan Perez and Ramon Santiago.

If you are a fan of pitcher's duels, you got one between Hamels and Fister. It helps when the Phillies are lousy and the Tigers are decimated by injuries, but a duel is a duel. The Tigers got just enough offense from unexpected sources to pull out a rare one run victory.

Great defense by the Tigers (Not a typo!) helped Fister retire the side in order in the top of the first. Ramon Santiago made a diving stop to rob Michael Young of a single, Hernan Perez raced into short right center to make a leaping over-the-shoulder catch to take a single away from Kevin Frandsen. Prince Fielder capped off the inning by knocking down Jimmy Rollins hot one-hopper, tossing to Doug Fister covering to end the inning.

It's a cliche, but true. Baseball is a game of inches. Hit the ball a few inches either way and the Phillies are still at the plate. But Austin Jackson was leading off the bottom half of the inning instead, inches falling in his favor. Jackson dropped a bloop double just inside the right field line. Jackson couldn't have walked out the right and placed it any better.

The Tigers couldn't capitalize, Hamels stranding Jackson by retiring the next three batters in order.

"They're missing some of their big guys too, so it's pretty much a wash. The key was Fister." -Jim Leyland on his short-handed roster

The Tigers wasted a one out, first and third opportunity due to trying to play small ball with the .160 hitting Santiago at the plate. It was a recipe for disaster.

Peralta doubled with one out, advancing to third on Perez's single to left. Then for some reason (insanity, stupidity, running out of Fs to give, the oft used managerial trope of "trying to make something happen"), it appeared Jim Leyland called for the hit and run with two strikes on Santiago. He took strike three, Perez getting himself caught in a rundown. Peralta took off for home, but was thrown out at the plate, the threat coming to a bizarre end.

Suddenly struck by White Sox disease, a Perez error set up a run for the Phillies.

John Mayberry was safe at first when Perez booted his ground ball, score it E-4. Mayberry would come around to score on back-to-back singles by Carlos Ruiz and Michael Young. Fister avoided further damage by striking out Kevin Frandsen and Jimmy Rollins.

Down 1-0, the Tigers countered by going down 1-2-3 ... in each of the next three innings. After the Tigers committed their brutal squander in the second, Hamels retired the next nine Tigers in order.

Top of five, after ten consecutive Tigers had taken a seat, Perez, suddenly swinging a hot bat, broke the streak with a one out single. The Tigers then proceeded to take the lead. Not asked to do anything but swing the bat, Santiago came through by doubling down the left field line, Perez stopping at third. Alex Avila fell down in the count to Hamels 0-2, then found the left center field gap with a fly ball, Perez and Santiago crossing the plate, giving the Tigers a 2-1 lead (MLB.com video).

Andy Dirks extended the inning by just plain out-hustling Young's nonchalant throw from third on a routine ground ball. A patient Matt Tuiasosopo worked a base on balls, loading the bases for Fielder. But Hamels got out of the inning on Fielder's can of corn to center, the Tigers unable to extend their lead.

Given a lead, Fister came through with the oft-missed shutdown inning, striking out two while retiring the Phillies 1-2-3 sixth.

At this point, both Hamels and Fister were dealing. After Tuiasosopo's walk in the fifth, ten straight batters took a seat, four Tigers, six Phillies.

Fister followed up a lights out fifth with a lights out sixth, once again tossing a 1-2-3 inning. Ten straight, and 14 of 15 Phillies had gone down to the Tall Man on the mound.

Santiago broke the out streak with a lead off walk in the seventh. That's where he would remain, Hamels the next three Tigers going down in order.

An old-school style game not yet two hours old was already headed to the eighth inning. Hamels was nearing the end of his game at 112 pitches, while an efficient Fister had at least one inning left in him with a pitch count of 95. While Fister was mowing down the Phillies, Joaquin Benoit and Drew Smyly were warming up.

After retiring 12 straight and 16 of 17, Fister finally allowed a base runner with two out in the eighth, walking Michael Young. Fister ended the inning without drama, Frandsen bouncing to short. He left the game receiving a loud ovation from the fans and the "Handshake of doom" from Leyland.

Hamels night was over as well, replaced by right-hander Luis García to start the bottom of the eighth. Don Kelly pinch hit for Tuiasosopo, leaving just Brayan Pena (the injured Miguel Cabrera and Torii Hunter were unavailable) as the lone Tigers' position player reserve. Garica allowed a one out walk to Fielder, but a pitcher's BFF, a 3-6-3 double play got him out of the inning.

"We can't use him (Benoit) in games we shouldn't have to use him." -Leyland on his bullpen's need to step up

Top of the ninth and the Tigers clinging to a 2-1 lead, the game was now on in the hands of Benoit. Jimmy Rollins led off with a single to right. Chase Utley flew out to left for the first out. Delmon Young at the plate led to both good and (mostly) bad memories for Tigers fans.

Delmon K's on a pitch way out of the zone. That looked somewhat familiar.

But Rollins narrowly beat Avila's on-target throw, advancing into scoring position by stealing second. He then stole third, Benoit all but ignoring him as he was concentrating on Darin Ruf at the plate. The steals soon became moot, Perez would gobble up Ruf's chopper to second to end a wonderfully pitched game.

GAME OVER. Your final score is Tigers 2, Phillies 1. Looking at the lineup the Tigers were forced to run out on the field, they needed a big game from Fister. The Tigers got it.

Fister received credit for the victory, but the real winners were fans. Or more correctly, fans who love quickly paced games. The 8 1/2 innings were completed in a fast 2:24.

Post game, when asked about the availability of Cabrera and Hunter, Leyland would only say he didn't know.

Post game, Leyland didn't have much to say about injuries. But he was adamant over his bullpen needing to step up, specifically referring to his needing to use Benoit against the White Sox.

The Tigers raise their record to 57-45, 30-19 at Comerica and 14-8 for the month of July. Their lead in the Central remains at three games. The Indians overcame blowing a four run lead, winning in walk off fashion over the Rangers on a Ryan Raburn home run in the 11th inning.

Game two of the interleague series was going to be a match up of a former Cy Young winner in Cliff Lee (10-4, 3.05 ERA) taking on a possible Cy Young winner in Max Scherzer (14-1, 3.14 ERA). But as trade deadline rumors swirl, Lee was scratched from his start with what the Phillies say is a stiff neck. Recently called up journeyman lefty Raul Valdes (1-0, 7.59 ERA) will be pulled from the bullpen and make his first start of the season in Lee's stead. Scherzer bounced back from his first loss of the season in his post All-Star Game start, beating the White Sox by allowing two runs and four hits over eight innings.

First pitch at Comerica Park is set of 7:10. No FOX blackout ridiculousness this week, the game will be carried by FSD and MLB.TV.

Out of the Tigers;' lineup were Miguel Cabrera, Torii Hunter and Omar Infante. Don Kelly was also a late scratch, though he did enter the game in the eigfhth as a pinch hitter.

Today I learned the Comerica Park DJ is on Twitter.

Delmon Young's first at bat was all too familiar, a first pitch swing resulting in an out. Though the umpires did miss the call on his sinking liner to short, Jhonny Peralta actually trapped it on the back-hand.

The reaction to the failed hit and run in the second inning was swift.

That's what happens when you make us run the bases. RT @lizroscher: That was a pretty awesome play. Thanks, Tigers!

Nearly put my palm through my forehead there. Oww...

Danny Worth found out first-hand the answer to that question - "An ill-advised contract extension with one year remaining at $2 million."

The fans down the right field line did a lousy job in the fourth, allowing Laynce Nix to reach into the stands and catch Prince Fielder's foul fly. Not one Bartman in the mix! 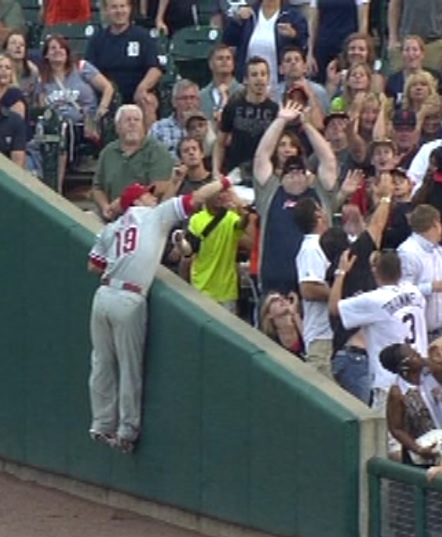 Tiger fans should be ashamed of themselves letting Laynce Nix catch that ball.

I REFUSE TO CALL HIM LAYNCE.

A game taking less than two and a half hours to complete brings back memories of Mart Fidrych. An extreme example was his final win of the 1976 season. Fidrych pitched a complete game victory over the Brewers, out-dueling Jim Slayton in just one hours and 46 minutes! Back in the day, games taking two hours or less games were not the rare bird they are today.

Doug Fister: Dominated the Phillies. Over his last three starts Fister is 3-0 with a 1.35 ERA. Second half Fister is kicking in.

Alex Avila: Drove in the only Tigers' runs of the night with a fifth inning double.

The bottom of order: Perlata, Perez, Santiago and Avila combined to go 4-for-10 with two walks, two runs and two RBIs.

Middle of the order: Three through five in the Tigers' lineup went 0-for-10 with a pair of walks. Fielder and Martinez need to produce when Cabrera is out of the line up. It was nice to see tonight, but you can't expect the bottom of the order bats to win the game.

In a game with few candidates, Brayan Pena's sprinting around the bases after a solo homer was rewarded with a win in the BYB PotG balloting, carrying 50% of the vote.