Youth will be served today as young guns Jonathan Pettibone and Rick Porcello face off in the series finale between the Phillies and Tigers.

Share All sharing options for: Game 104 Preview: Phillies at Tigers

Pettibone has been one of the few bright spots in an otherwise dormant Phillies farm system, rising quickly through the ranks after being drafted out of high school in 2008. He posted three consecutive sub-3.50 ERA seasons from 2010 to 2012 as he rose from A-ball to Triple-A. He got off to a rough start this year at Triple-A Lehigh Valley, but joined the Phillies rotation in late April and has held his own over the past three months.

Pettibone wasn't much of a strikeout artist as he rose through the minors, maxing out at a 18.2% strikeout rate in 19 Double-A starts last year. His walk rate has rose a bit in the major leagues, resulting in a FIP and xFIP above 4.00. He relies heavily on ground balls to get outs. His two-seamer, slider, and changeup all induce grounders at a 54% clip or better, and it isn't hard to see his ERA dropping closer to the 3.60-3.75 range if he can improve his overall ground ball rate a bit more.

One interesting thing about Pettibone is how he mixes his pitches. While many pitchers have certain tendencies -- throwing fastballs early and breaking balls late, typically -- Pettibone hasn't shown much of a difference in pitch selection based on the count he's in. He throws his changeup more often to lefties and his cutter and slider to righties, but still throws nearly 40% breaking balls and off-speed pitches when down in the count.

Porcello shut down the Chicago White Sox in his last start, allowing no runs and just four hits in seven innings. He issued three walks, his highest total of the season. While his command was a bit off in that regard, he did an excellent job of keeping the ball on the corners. Seriously, this is impressive. 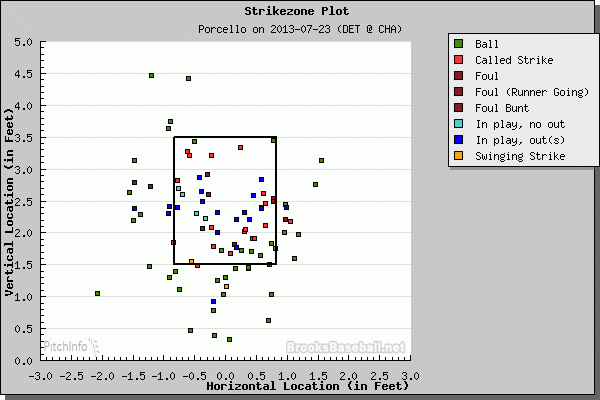 That's a lot of white space in the middle of the plate, which is quite encouraging.

Pettibone has been on a surge recently, allowing a 3.18 ERA in his last six starts. He has seen a recent jump in his strikeout rate as well, fanning 27 batters to 13 walks in his last 34 innings. He has also allowed just one home run in this span. Porcello has been on a similar run, allowing just six runs in his last four starts. This includes two starts where he has tossed seven shutout innings, both of which came on the road. He has been inducing a lot of weak contact lately, something that will need to continue today if he wants to pick up his fourth straight victory.

Porcello continues his recent run and the offense gives him his eighth win of the year.