The Tigers put together arguably their best week of the season, winning six of seven games including four on the road.

Share All sharing options for: Week 17 review: No Miguel Cabrera? No problem!

The Tigers rebounded from a sluggish start after the All-Star Break to win six of their seven games this week and finish their seven game road trip with a 4-3 record. The Tigers took three of four from the Chicago White Sox at U.S. Cellular Field before sweeping the Philadelphia Phillies in convincing fashion at Comerica Park over the weekend.

The week got off to an auspicious start, with the Tigers set to face Chris Sale on Monday night's series opener. Fortunately, the Tigers' success against Sale continued and they cruised to an easy 7-3 victory. Max Scherzer picked up his 14th win of the season after pitching eight efficient innings.

However, the win was overshadowed by Miguel Cabrera's injury, later deemed a hip flexor strain by the Tigers' training staff. Cabrera left the game early in significant pain, leaving the Tigers fanbase in a higher state of panic than usual. Cabrera was pronounced "day-to-day," but that's a whale of a bat to have out of any lineup for a significant period of time.

The absence of their slugger wouldn't affect the Tigers over the next two days. They feasted upon numerous fielding gaffes by the White Sox en route to a pair of 6-2 wins on Tuesday and Wednesday. Hernan Perez was the hero of Tuesday's game, hitting a deep fly ball to the wall that Dayan Viciedo bobbled. Perez was able to take advantage of Viciedo's error and round the bases, though the play was ruled a triple and error. The bats came to play on Wednesday, hitting three home runs to back Anibal Sanchez.

Last season, a day game with Justin Verlander on the mound against a division rival would have almost guaranteed a Tigers victory and sweep. This season? Not so much. Verlander struggled against the White Sox for the second time this season, allowing seven runs on 11 hits. The Tigers were able to get to White Sox starter Jake Peavy eventually, but couldn't close the deficits, losing 7-4. Verlander has now allowed 23 hits to the Pale Hose in two starts this year.

Despite the bad taste of their ace getting roughed up in their mouths, the Tigers were able to gut out a 2-1 victory against the Philadelphia Phillies on Friday night. Doug Fister was brilliant, allowing just one unearned run in eight innings. Cole Hamels pitched well for the Phillies, but a lack of run support handed him his 13th (!) loss of the season.

There would be no shaky moments on Saturday evening, as the Tigers jumped out to an early 5-0 lead in the first inning off spot starter Raul Valdes. Miguel Cabrera returned to the lineup and looked as if he had never left, hitting a solo home run on his first swing. The Tigers' two out rally continued when Matt Tuiasosopo hit a three run homer later in the inning. The five runs would be plenty for Max Scherzer, who cruised to his 15th win of the year.

Sunday's game got off to a shaky start. With the Tigers in a 1-0 hole, Miguel Cabrera took offense to a pair of strike calls by home plate umpire Chad Fairchild. Fairchild was apparently in no mood for discussion, and ejected Cabrera on an 0-2 count with the bases loaded. Jim Leyland came out to discuss the proceedings, but quickly lost his temper and was also ejected. The Tigers stranded baserunners in the third and fourth innings before breaking through in the fifth and sixth innings to take a commanding 11-3 lead that turned into a 12-4 win.

The weekend sweep vaulted the Tigers to a season high 14 games over .500, three ahead of the Cleveland Indians in the AL Central. Cleveland swept the Texas Rangers at home over the weekend and is now within one game of the second AL Wild Card spot, but couldn't close the gap in the division.

Batter of the week: Torii Hunter

You don't score 47 runs in seven games without several guys having big weeks, but Torii's bat was a key cog in the machine. Hunter hit .409/.417/.864 in five games with three home runs, seven runs scored, and five RBI. Victor Martinez, Brayan Pena, Hernan Perez, Ramon Santiago, and Miguel Cabrera all had wOBAs over .400 this week.

The Tigers' starters got back on track in a big way this week, allowing 12 earned runs in 47 innings. Neither Doug Fister nor Anibal Sanchez allowed any earned runs, but Scherzer was arguably the most dominant of the group. Max struck out 12 batters in 14 innings and allowed just two earned runs, picking up his 14th and 15th victories of the season. Rick Porcello was solid as well, allowing three earned runs in 13 innings. 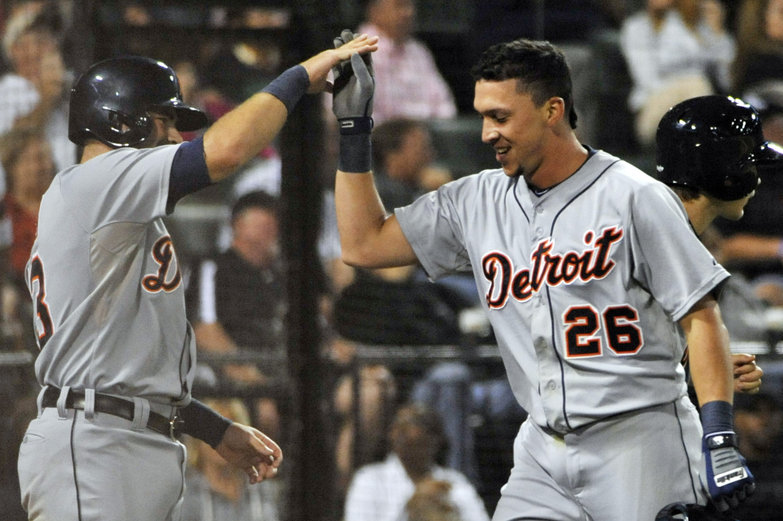 The Tigers took advantage of some sloppy play and won a very entertaining 6-2 ballgame.

After a well deserved off day today, the Tigers will play a two game series against the struggling Washington Nationals at Comerica Park. The Nationals swept the New York Mets at home over the weekend, but are only 4-7 since the All-Star Break. The Tigers offense will have their work cut out for them with Stephen Strasburg and Gio Gonzalez on the hill for the defending NL East champs.

The Tigers have Thursday off, then will welcome the Chicago White Sox back to town for a three game weekend series. The Sox were swept by the Kansas City Royals this weekend and will play four games in Cleveland prior to their series in Detroit. The White Sox have not had a day off since the All-Star Break.

The Toledo Mud Hens went 4-3 on the week thanks to some strong pitching. They allowed just 15 runs in seven games. The Hens are still in last place in the West division of the International League, 15 games behind the Indianapolis Indians.

Double-A Erie had a strong week, finishing 6-1 during a seven game homestand. The big week brought them within a game of first place in the Western division of the Eastern League.

High-A Lakeland only had one game postponed this week, and it was completed the next day. Despite this "playing every day" scheduling quirk, the Flying Tigers were able to go 4-3 on the week. They are 15-16 in the second half of the season, four games out of first place in the North division of the Florida State League.

Low-A West Michigan enjoyed the company of a pair of big leaguers on rehab stints this week, but were only able to compile a 2-3 record. Omar Infante left Wednesday's game early with ankle soreness, while Darin Downs pitched a scoreless inning during Thursday's 4-3 win against Fort Wayne.

The Connecticut Tigers of the New York-Penn League went 5-3 on the week, including the completion of a game that was postponed last Sunday. They are in last place in the Stedler division, 8 1/2 games out of first place.

The Gulf Coast League Tigers were only able to play four games last week, but won three of them. They are 19-10 and in first place in the Northeast division.