Is Jose Iglesias a 'bat'?

Jose Iglesias has a reputation for defense. But can he hit?

Share All sharing options for: Is Jose Iglesias a 'bat'?

Alex Avila hit the first grand slam ever off of Stephen Strasburg last night. That would normally headline today's baseball news in Detroit.

Miguel Cabrera had to leave the game as he continues to deal with discomfort in his hip and/or abdomen. That is newsworthy.

But trading away a top outfield prospect for a new shortstop steals the show. 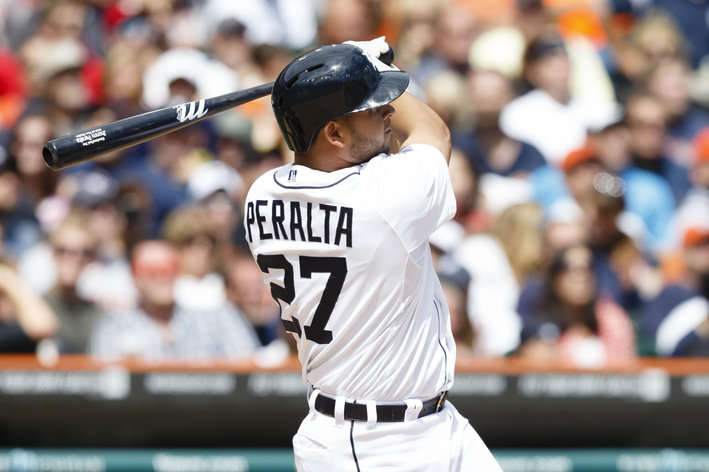 Dave Dombrowski held a press conference yesterday. He was asked whether the Tigers were looking to make any more moves before the trade deadline. I believe his answer was along the lines of "we are not looking to add a bat". He should go into politics. He did not want to show his cards, and was working on adding a glove.

Iglesias defected from Cuba, so he can bond with fellow Cuban Brayan Pena. Ten years ago a Moneyball strategy was to find players with a high on-base percentage. Now it appears that Cubans are undervalued. The Athletics got the ball rolling with Yoenis Cespedes, and the Dodgers must be thrilled to have signed Yasiel Puig. I hope that there is no bad blood between Venezuelans and Cubans.

Jose made Triple-A at age 21, and even a brief appearance in Boston, though he struggled to hit. Regardless it is a good sign. Good major league players advance through the minors quickly. He only has about two years of minor league experience, and the most encouraging sign is that he strikes out in less than 15% of his plate appearances. He has maintained this in his big-league at bats. The strikeout rate is encouraging, because the minor league triple slash line of .257 / .307 / .314 does not by itself look promising. If the reputation with the glove is accurate, Iglesias can compensate for a weaker bat and provide average production for a shortstop. But if he develops some power in the next few years, he could be an All Star.

Who are the winners? The pitching staff. Rick Porcello and Doug Fister can induce groundballs with fewer worries now.

Who are the losers? Argenis Diaz and Danny Worth were hoping to be called up and catch lightning in a bottle. Either one could have been hot for 50 games, ala Tuiasosopo, and turned that into a decent contract. If Jhonny Peralta enjoyed being in Detroit he will be disappointed this offseason, as he will likely be signing a free-agent contract elsewhere.

Somebody needs to give Miguel Cabrera a hug. He is fighting a nagging injury, and now they traded away his little brother.