The Blue Jays acquired Rogers from the Cleveland Indians in what is quickly becoming one of the biggest win-win trades of the offseason. Rogers made a seamless midseason transition from the bullpen to the rotation in June, helping to spark the Jays' 11-game winning streak. In his six starts, he is 2-1 with a 2.28 ERA in 33 innings. He has also improved his strikeout rate considerably, fanning 7.27 batters per nine innings since moving to the rotation.

Rogers has shown a knack for piling up ground ball outs as a starter, putting up a ground ball rate of 55.3% in June. This is largely due to an increased reliance on his two-seam fastball. In April and May, he threw the two-seamer just 8.9% of the time. In June, that rate ballooned to 35.4% of the time. Opposing hitters are pounding the two-seamer into the ground 63% of the time, and are hitting .171 with an ISO of just .049 off that pitch. His low BABIP -- .184 on the two-seamer, .231 overall in June -- may indicate some overperformance and/or luck on his part. The fact that his two worst starts game on the hard-packed turf surfaces in Toronto and Tampa may be coincidence, but they may also be another indicator that his ground ball wizardry may not continue much longer.

Neither righties nor lefties have had a platoon advantage strictly in terms of batting average against Rogers this year, but his command has been an issue against lefties. He has issued 16 free passes to left-handed hitters this year compared to just two against righties. One of the reasons for this may be his unwillingness to pitch inside to lefties. 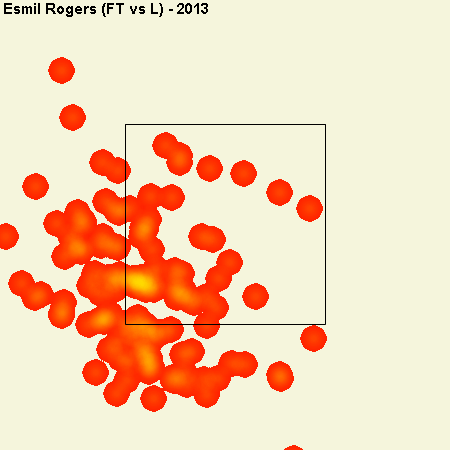 The natural arm-side run that will make the two-seamer effective inside against righties could be running off the plate against lefties, who typically won't swing at the outside fastball.

For those that believe in conspiracy theories, consider this. I wrote a post detailing a mechanical change in Verlander's delivery just over a week ago. A few days later, Verlander says he "found something," then goes on to allow two runs in eight innings against the Tampa Bay Rays. Coincidence? Probably, but maybe there's a chance I fixed Justin Verlander.

That said, Verlander still gave up a ton of baserunners in Tampa, allowing nine hits and four walks. His WHIP is now dangerously close to the 1.403 mark he put up in 2008. One of the biggest reasons for this is how often hitters are getting hits via ground balls. In 2012, opposing hitters had a batting average of .184 on ground balls off Verlander. This year, that average has climbed to .282. His batted ball rates have hardly budged since last season -- even his line drive rate has held steady -- and opposing averages have not changed on line drives or fly balls. Given the hard track that the teams are playing on, I don't know if we'll see much of a change tonight.

Today is a celebration for good, old-fashioned American values (NSFW language), and the Tigers need to epitomize America's independence with their play. Canada may have asked for their independence nicely, but they are basically still owned by England. Hell, their money still has the queen on it. South of the border, we Americans stood up for our rights and took our freedom away from the oppressive British. Tonight, Verlander needs to pitch for our American forefathers. Bring the heat, take no prisoners, and show the British-loving Canadians why taking what you want is way better than spelling things with an extra 'u' for the rest of eternity.

Verlander wins one for America tonight and the Tigers take three of four.