The Tigers and Indians start a four game series tonight at Progressive Field. Indians ace Justin Masterson will look to continue his dominance at home against the unpredictable Rick Porcello.

Share All sharing options for: Game 85 Preview: Tigers at Indians

Masterson appears to be over the mini speed bump that he hit in late May and early June. Despite allowing six runs to the Baltimore Orioles in one start, he has a 2.83 ERA and 2.49 FIP in his last four outings. He has at least seven strikeouts in each of those starts, and has only walked eight batters. He shutout the Chicago White Sox in his last start, striking out eight.

The most incredible part of Masterson's resurgence is his huge improvement against left-handed hitters. Lefties are hitting just .250/.333/.375 off him this year after they hit .296/.376/.450 last year. While there have been rumors of Masterson working on a changeup, he hasn't used it in game action. So, why has Masterson gotten so much better against lefties? For one, he's throwing his slider more often. Last season, he used it 17.3% of the time against left-handed hitters. This season, that number is up to 26%.

Another reason for Masterson's improvement is his jump in strikeout rate. He is fanning a batter per inning this season, well above the 17.6% rate he posted last season. He is striking out both righties and lefties at a higher clip, but his jump in strikeout-to-walk ratio against righties is impressive. Last season, he struck out 2.72 batters for every walk against right-handed hitters. This season, that rate is up to 4.92 strikeouts per walk.

The enigma that is Rick Porcello kept on trucking in his last start, allowing three runs in six innings against the Tampa Bay Rays. While not dominant by any means, it was a huge improvement from his previous two starts. He had allowed 13 runs on 19 hits in his past 10 1/3 innings, ballooning his ERA from 4.37 to 5.27.

Fun fact: 16 of Porcello's 50 earned runs this season have come against the Los Angeles Angels. If we cherrypick those numbers out of the equation (much to Singledigit's chagrin), Porcello would have a 3.98 ERA and 1.094 WHIP this season. Is this the real Porcello? Nobody knows at this point, but it's a little more encouraging than his overall numbers.

What's with the Indians? 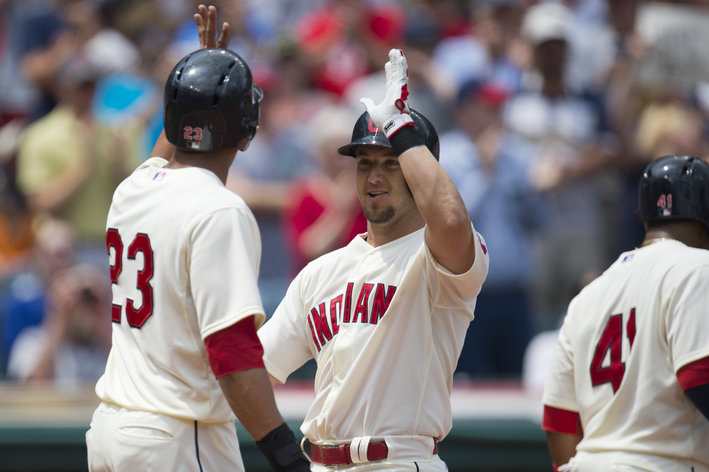 The Tigers are in first place as expected, but not by much. How are the Indians staying close?

Since we last saw each other...

The Indians are 15-8 since being swept in Detroit in early June. They have scored 119 runs in those 23 games, an average of 5.17 per game. If not for a pair of bullpen implosions in their last two games, they would have won six of their seven series in that span (with the seventh being a four-game split in Baltimore). Meanwhile, their pitching staff has given up an even 100 runs, including the aforementioned late-inning losses against Kansas City.

Considering the circumstances -- a four game series in Cleveland without Justin Verlander -- the pitching matchups in this series couldn't have panned out much better for the Tigers... other than tonight, that is. Masterson has been dominant at home this season, posting a 6-1 record and 2.29 ERA at Progressive Field. He has only allowed two home runs and nine extra base hits in nine home starts, and has 69 strikeouts in 63 innings.

On the other hand, Porcello's road numbers have actually been pretty solid considering they include That Start in L.A. He is 2-4 with a 4.99 ERA, but his 1.235 WHIP and 4.29 strikeout-to-walk ratio are much better than his home splits. The problem? He has allowed seven home runs in seven road starts. This is a bad combination to have against a homer-happy Tribe offense.

The Indians' offense stays hot and starts the series with an easy win.