Having allowed 16 runs in his last 16 1/3 innings, Rick Porcello bounced back by shutting out the Indians over seven innings. The Tigers win their fourth game in a row, increasing their lead in the AL Central to 2 1.2.

Rick Porcello leading the way by shutting out the Cleveland Indians for seven innings, the Detroit Tigers took the first game if a weekend series with their closest competitor in the AL Central with a 7-0 win. The victory extends the Tigers' divisional lead to 2 1/2 games over the second place Indians.

After the game, the Tigers announced rookie left-hander Jose Alvarez was optioned to Triple-A Toledo. Anibal Sanchez will be activated off the 15-day DL.

Winners of four straight, the Tigers' starting pitching looks to be back on track. After Justin Verlander shut out the Blue Jays on three hits over seven innings Thursday, Rick Porcello nearly equaled the ace's performance. In his previous three starts, Porcello was 0-3 with an 8.82 ERA, allowing 16 runs in 16 1/3 innings. Tonight, the Tigers' number five starter allowed a mere five hits over seven scoreless innings.

Read More: Game 85 Preview: Tigers at Indians Let's Talk Tribe: Episode 4 How are the Indians hanging with the Tigers?

The Tigers generated the first threat of the game in the second, loading the bases with two out. Martinez singled with one one out, but was quickly eliminated when Peralta bounced into a force. Two down, Don Kelly kept the inning alive with a single. Alex Avila worked a full count on Masterson before drawing a walk to load the bases. Despite batting ninth and hitting well under the Mendoza Line, Santiago came through with a huge two out RBI hit, a line drive single to center giving the Tigers a 2-0 lead (MLB.com video).

While FSD was playing with their new toy, the "Phantom Cam," Dirks led off the third with a gapper to right center for a stand up double. Cabrera increased his MLB leading RBI total by bouncing a single past a diving Asdrubal Cabrera, the Tigers up 3-0 as Dirks crossed the plate.

While the Tigers were nickel and diming Masterson for five hits and three runs, Porcelo was scattering Tribe base runners, but keeping them off the scoreboard. Porcello allowed just two hits and two walks through four.

By the fifth inning, Masterson had settled down somewhat. But a pair of walks gave the Tigers a two out scoring opportunity. Dirks walked with one down, advancing to second on a wild pitch. First base open, and preferring to face Martinez, Masterson avoided Fielder with a four pitch walk.

I like to take the Detroit Tigers anywhere because I think we have a really good team. -Jim Leyland on the Tigers' road record

Martinez made the Tribe pay for the slight, reaching out for a breaking ball, looping it into right center for a two out RBI single, Dirks scoring to make it 4-0 Tigers. Peralta followed with a dagger, his opposite field gapper to right center plating both Fielder and Martinez (all the way from first). The two RBI double pushed the Tigers' lead to 6-0 and sent Masterson to the showers.

Terry Francona replaced his starter with lefty Rich Hill. He struck out Kelly on three pitches to end the inning. But it was a huge half inning for the Tigers, all but putting the game in their hip pocket by scoring three runs on two walks and two hits. Masterson was tagged with all six Tigers runs in 4 2/3 innings.

With one out in the fifth, Lonnie Chisenhall dropped a bloop just in front of a diving Dirks for a two base hit. But Porcello pitched himself out of trouble, Stubbs on a comebacker, Bourn bouncing out 4-3. Porcello had a allowed a base runner in every inning to this point, but had shut out the Indians through five.

Bruce Rondon was warming up in the sixth as Porcello gave up back-to-back singles to Jason Kipnis and Swisher. Michael Brantley nubbed what should have been a double play chopper to Porcello, but his high feed to Peralta (who made an acrobatic play to get the force) meant the inning would be extended. It almost cost Porcello. Almost.

Runners on the corners and two out, Santana hit the ball very hard, but to the wrong part of Progessive Field. Jackson was able to run down Santana's fly on the warning track in deep center to end the inning.

Top of seven, Dirks led off by necking a liner into the right field corner for his second two base hit of the night. On third with two down, Dirks scampered home with the Tigers seventh run of the night on Martinez's single to right.

Holding a 7-0 lead and the bottom of the Indians order up in the seventh, Porcello was asked to get three more outs. Porcello did just that, needing only seven pitches to retire the side.

Bottom of eight, Porcello having been given the rest of the night off, Al Alburquerque took over. The slider working to perfection, Alburquerque struck out the side.

After warming up while the game was somewhat still in doubt, Rondon pitched the bottom of the ninth with it no longer in doubt at 7-0. Rondon got into a bit of trouble, allowing runners on second and third with one out. But Rondon settled down, striking out Mark Reynolds on a 3-2 slider and dispatching Chisenhall with via the strikeout as well.

Your final score is Tigers 7, Indians 0, drum guy in the bleachers annoying x100.

Post game, Jim Leyland admitted Miguel Cabrera (who is moving gingerly on the field) is not 100%, adding,

"There's no question about it."

With three games remaining, the Tigers are now 5-3 on their long 11 game road trip. Another win guarantees a winning road trip, something the Tigers have had trouble doing in 2013.

Winners of four in a row, the Tigers raise their record to 47-38 on the season. Losers of three straight, the Indians fall 2 1/2 back of first place Detroit, dropping to 45-41.

In the second of a four game series between the top two teams in the Central, Anibal Sanchez (6-5, 2.76 ERA) makes his return to the Tigers' rotation after a bout with a stiff right shoulder. Sanchez will be activated off the 15-day DL before the game to make his first start since lasting only 3 2/3 innings against the Twins on June 15. The Indians will counter with right-hander Carlos Carrasco (0-3, 8.17 ERA), who is coming off a six run, ten hit 5 2/3 inning no-decision in his last start on June 28. First pitch at Progressive Field is 4:05 PM.

I could not agree with Rob more.

Andy Dirks went for the all or nothing grab on Nick Swisher's sinking liner with a runner on and two out in the first inning. Dirks made an excellent diving catch to neck out Swisher of extra bases, save a run and end the inning. (MLB.com video).

FSD finally breaks out the PHANTOM CAM on a second inning ... ground out.

Don Kelly batting sixth? ARRRRGH, FIRE LEYL ... what's that? Donnie Baseball has a 1.008 OPS since June 1? Never mind and carry on. Kelly remained on a tear, singling in his first at bat, helping to trigger a two run rally.

The .183 hitting Ramon Santiago entered the game with two RBIs on the season. His second inning bases loaded single doubled his RBI output.

The bottom of the Tigers order gave them an early lead, to the utter frustration of Let's Go Tribe:

That slowmo of Masterson's elbow is going to cause some nasuea for many. 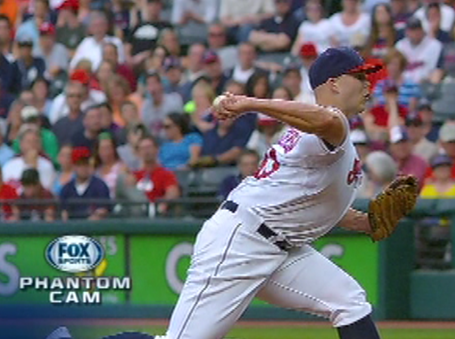 Ouch. That's not right. Hard to believe Masterson's elbow doesn't explode when putting so much torque on the arm.

Austin Jackson made a fine running catch on Michael Bourn's sinking line drive in the third inning, plucking it off the grass at his ankles. Jackson then got one of the easier assists of his career. Drew Stubbs was on first, went halfway, looked at toward center to see Jackson make the catch, then continued on to second anyway. Stubbs was easily doubled off as he stood on second with a bemused look on his face. 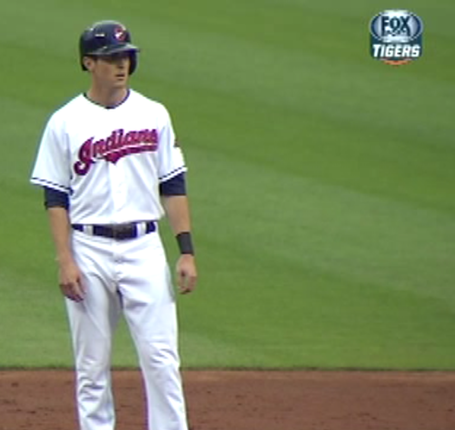 God help is all, via Indians' PR:

"Nice work if you can get it."

Meanwhile, Brayan Pena was busy falling off the Gatorade bucket: 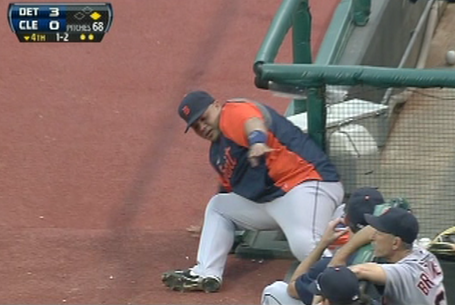 Meanwhile, on Twitter while Porcello was pitching out of a sixth inning jam:

RT @D_Tigers_Fan: Trade porcello NOW!!! Stock will not get higher with nl team! Get a shutdown reliever for 8th inning= World Series!!!

The last thing the Indians needed was their starter getting knocked out early. This bodes well for the rest of the series:

Indians bullpen has already pitched 9 2/3 innings in the past three days. Masterson pulled after 4.2 IP today vs. #Tigers.

Rob is trying to make Heavy B a thing.

Rick Porcello: Excellent outing for Kid Rick. Was never in any serious trouble despite allowing at least one base runner in each of the first six innings. Porcello's last inning was his best, needing only seven pitches in a 1-2-3 seventh.

Victor Martinez: One of his best games of the season. Martinez reached base in all four at bats, coming through with three hits and two RBIs. Martinez is hitting .414 over his last seven games.

Ramon Santiago: Continues to fill in ably for the injured Omar Infante. Santiago gave the Tigers a lead they would never relinquish with a two out RBI single in the second.

Jhonny Peralta: His two out, two run double in the fifth was the dagger in the Tribe's chances.

Jason Kipnis: Because no one should suffer from Kipnis.

Justin Verlander was on his game, shutting out the Blue Jays on three hits over seven innings, earning BYB PotG with 53% of the vote.