Well, I hope that everyone has had a great holiday weekend so far. I was on a boat with the future Mrs. rbbaker and her parents all weekend away from the interwebs, but surrounded by (my own) beer. Unfortunately, it was also surrounded by rain for the majority of the time, so I didn't get much of a suntan. Back to the real world, though.

Thus far, the Tigers have sacrificed a chicken and woken the bats up (thanks to poutine, mostly, but I'm sure the Tim Horton's helped, too), taking two of three from the Indians. Miggy is hitting the crap out of the baseball, Max can't lose, and JV's doppelganger has been swiftly drowned in Lake St. Clair, allowing the real 2011 AL MVP to come forward. I just knocked on every piece of wood I could find. My head hurts...

As for the beer, I toyed with the idea of doing another Great Lakes Brewing Co. beer, especially after the clamoring for Rye of the Tiger during the last series, but there's more than one great Cleveland beer. Despite it's awful name, Buckeye Brewing Company makes some great stuff, including an appropriately named, ultimately fantastic beer for the weekend, the Seventy-Six IPA. 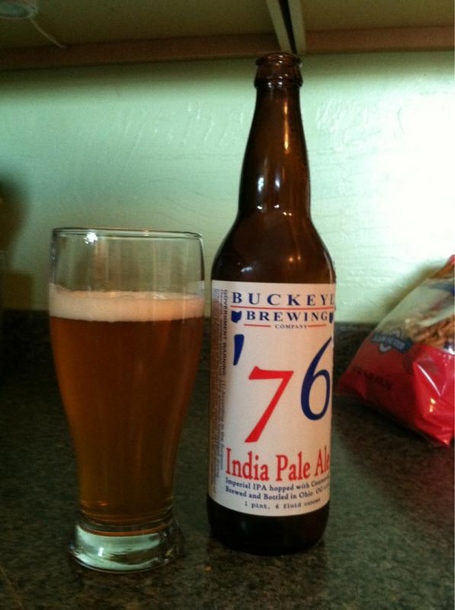 A word to the wise: if you're going to hop the daylights out of a beer, you need to balance it with something a little sweeter to make things drinkable. The Seventy-Six does a great job with this. I love hops as much as the next person, but I do love an IPA that features balance, and the floral notes juxtaposed with the subtle toatiness of the malty finish make this beer fantastically drinkable. The citrus aroma and haze scream IPA, but you're pleasantly surprised when you reach the caramel malt notes to finish the beer off. As far as Imperial IPAs go, you are in good hands with this one. At 7.8% ABV and 80 IBUs, you'll love a bomber with some seafood on the patio enjoying the sunset and another Tigers victory.