I'm still in a little bit of shock realizing that the season is over half over and we're just now playing the White Sox. Especially because we only have three non-division road trips left this season (Yankees, Mets, Red Sox).

5. AJ Pierzynski. I know he doesn't play for them anymore, but he still rankles me.

4. Alexei Ramirez. He seems to channel Luis Aparicio every time we play them. Stop it.

3. Hawk. Because of his stupid nicknames for the players.

2. Hawk. Because the only way I can ever watch the Tigers in Indy is on the White Sox broadcast.

Alas, the White Sox give me a damn good reason to drink 19 times a year.

The Paw Paw Brewing Company is relatively new to the scene, but have already made their mark with a few quality brews. My personal favorite of the lot is the KUA Extra Pale Ale. 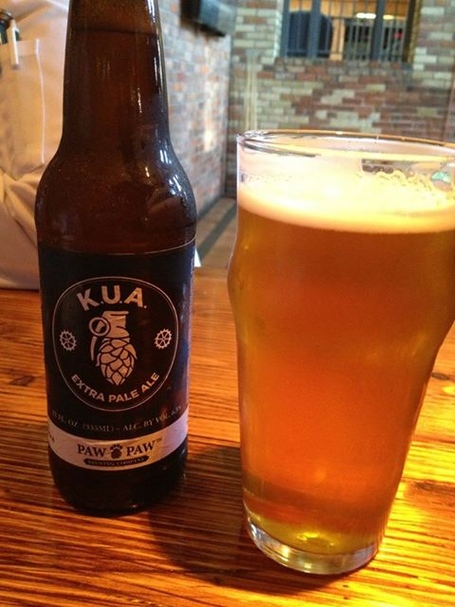 We've already done a few IPAs on the series. The Extra Pale Ale is slightly different. It's a little less hoppy and has a slightly maltier finish. It is also less bitter and lower in alcohol content. The KUA is a great example of this. A nice golden color and a very stout head. The citrus aroma is balanced with a nice bit of clove and a hint of caramel, which comes back in the finish. The malt is aggressively toasty, but not moreso than with most similar beers, making this a very drinkable beer. The 6.1% ABV figure is on the high side of the style, but this is a great beer to stretch a six pack across the series. Anything to drown out Hawk...

The Paw Paw Brewing Company is located in, where else, Paw Paw, MI.