The Detroit Tigers' 12 game winning streak was snapped Friday night by the New York Yankees. So the Tigers just went and started another streak, cruising to a 9-3 victory. The rampaging Tigers have won 13-of-14 and 17-of-19.

Anibal Sanchez was the stopper for the Tigers, shutting down the Yankees on four hits and two runs, striking out eight in seven innings of work.

Two batters into the game, Phil Hughes had the Yankees in a 1-0 hole. Hughes took the loss, allowing four runs and seven hits in 4 1/3 innings. Preston Claiborne took over, the Tigers tacking on four more runs in just an inning of work.

In game one, it was the Yankees' top of the order doing the majority of dame. This afternoon, the Tigers' 17 hit offensive onslaught was led by the top three in the order. Austin Jackson had two hits, three runs scored and an RBI. Torii Hunter blasted a three run home run as part of a three hit, two run, four RBI day. Miguel Cabrera had three hits, including a solo home run, two runs scored and an RBI. Don Kelly added two hits and two RBIs.

All of the Yankees' offense came off the bat of Lyle Overbay. The Yankees' first baseman clubbed a two run home run in the fifth inning, and singled in the ninth to drive in his third run.

As for the ongoing Alex Rodriguez drama, save for the news of disciplinary action over his receiving an unauthorized second medical opinion, there wasn't any. A-Rod was not in the Yankees' starting lineup, spending the afternoon on the bench.

Compared to the the drama of Friday night, today's game was a snoozer - but in a good way. The Tigers were never in any serious trouble, putting the game away in the sixth. The Tigers up 9-2, both teams essentially closed up shop, the final three innings playing out quietly.

Jackson open the game against Phil Hughes by tripling over the head of Brett Gardner in center field. Torii Hunter made sure there would be no squandering, sending a a sacrifice fly to center, Jackson tagging up and scoring easily to give the Tigers a 1-0 lead.

The Tigers threatened with two out in the second, but this time around Hughes was able to wriggle out of trouble. Don Kelly led off wiith a single, advancing to third on a two out bloop off the bat of Jose Iglesias. Jackson stuck out to end the threat, Hughes striking out the side.

At the very least, the Tigers were making Hughes work, his pitch count at 54 after just two innings. A starter averaging 27 pitches an inning after the Yankees used six relievers Friday night was the last thing Joe Girardi wanted to see. In the meantime, Tigers' starter Anibal Sanchez had retired six straight Yankees on 20 pitches.

One out in the third, Cabrera extended the Tigers' lead by pulling his hands in, turning on Hughes' inside fastball (out of the strike zone, actually), yanking a line drive to left field, which cleared the wall in a big, big hurry. Cabrera's 35th home run and 109th RBI increased the Tigers' advantage to 2-0 (MLB.com video) (Click on pic for GIF).

In the pitch count battle, Hughes was working hard, Sanchez hardly working, Through three innings, Hughes was laboring at 75, Sanchez a very efficient 28.

Sanchez's bid at a no-hitter ended in the bottom of the fourth. Of course it would be at the hands of Brett Gardner, who all but beat the Tigers' single-handedly Friday night. Sanchez shattered Gardner's bat, but still got enough juice on the ball for it to drop in short right. The broken bat bloop single gave the Yankees their first base runner of the game.

"I'm not a big guy on momentum in baseball." -Jim Leyland on starting another streak

Gardner was forced at second by Ichiro, who narrowly beat Iglesias' throw to first. He proceeded to steal second, advancing to third when Robinson Cano slapped a single to left. Suddenly finding himself in his first jam of the game, Sanchez just as quickly got out of trouble. in a beautiful show of pitching, Sanchez struck out Alfonso Soriano and Curtis Granderson, ending the threat over.

Top of five, Jackson continued with his destruction of Yankees' pitching, lining a one out solo home over the left field wall. Jackson's fifth extra base hit in nine at bats was home run number nine on the season, giving the Tigers a 3-0 lead (MLB.com video).

After Hunter singled, Cabrera looming on deck, and down three runs, Girardi made the call to pull his starter. Hughes left the field to chorus of boos from angry Yankees fans (Then again, is there any other type of Yankees fan?). Right-hander Preston Claiborne got the mound assignment.

Cabrera greeted Claiborne with a line single to left, his third straight hit on the day. Hunter took a big turn but scrambled back to second. A runner now in scoring position, Fielder struck out. But Victor Martinez picked him up, slashing a two out opposite field RBI double to left, Hunter crossing the plate to make it 4-0 Tigers.

Batting in the six hole, Kelly didn't hit the ball hard, but he hit it where they ain't. Donnie Baseball increased the the Tigers' lead to 6-0 with a soft, looping single to short right center., Cabrera and Martinez scoring. When the inning finally ended, the Tigers had sent eight to the plate, scoring four runs on five hits.

Sanchez had shutout the Yankees on three hits over four innings. Two batters into the fifth, Sanchez had allowed five hits and two runs. Edwin Nunez led off with a double to left, and rode home on Lyle Overbay's no-doubt home run to right. The Yankees had pulled within four at 6-2.

"They showed me something." -Leyland praising his Tigers for bouncing back from Friday's loss

The home run seemingly fired up Sanchez. He easily ended the inning from there, striking out the next two batters on seven pitches, then retiring the always pesky Gardner on a weak bounce out.

Claiborne was still on the mound for the Yankees in the top of the sixth. He wouldn't be there much longer. One down, Iglesias singled and Jackson walked. Not wanting to allow the inning to get out of control, Girardi replaced Claiborne with big right-hander Joba Chamberlain.

The inning spun out of control, regardless.

Hunter crushed a Chamberlain slider to the opposite field, his drive clearing the wall in left center at the 385' mark for an Earl Weaver Special! The three run bomb was home run number 13 for Hunter, pushing the Tigers' lead to 9-2 (MLB.com video).

GAME OVER, despite three innings being left to play. The Tigers having placed the game in their hip pocket, the rest of the afternoon proceeded in perfunctory fashion.

Sanchez was pulled after seven excellent innings. Drew Smyly pitched an uneventful eighth. Donnie Baseball doubled in the ninth, giving him three hits on the day. Jeremy Bonderman wrapped up the victory, but did allow a meaningless two out ninth inning run, Overbay driving in Granderson.

Bonderman ended the game in style with a strikeout of Jayson Nix, the Yankees' third baseman earning a Golden Sombrero.

GAME OVER, though it had been a done deal for some time. Anyway, the final score is Tigers 9, Yankees 3.

After a 12 game win streak full of dramatic comebacks and the Tigers' first loss in two weeks going down in painful fashion, a casual, humdrum, ho hum, easy win was a nice tonic.

Playing at a .600 clip on the season and holding the top record in the American League, today's win raises the Tigers' record to 69-46. Their lead in the Central increases by a half game to 7 1/2. Both the Indians and Royals play tonight.

In the Yankees series finale, Justin Verlander (12-8, 3.50 ERA) faces ancient left-hander Andy Pettitte (7-9, 4.71 ERA). In his last start, an eight inning four hit, one run victory over the White Sox, the Tigers' ace was throwing like the 2011 Cy Young winner he is. Verlander had pinpoint command, not walking a batter, while hitting triple digits with his fastball. Pettite has not pitched well as of late. The White Sox shelled Pettitte for 11 hits and seven run in just 2 2/3 innings in his last appearance, and is 0-2, 6.32 in his last three starts. First pitch is 1:05 PM.

Just when you think Miguel Cabrera has done it all, he has another ridiculously good at bat, homering for the second straight game.

There are not enough adjectives, in the universe, to do justice to how good a hitter Miguel Cabrera is.

Believe they call it "dropping the hands inside" on that Cabrera HR. Other guys drop their hands -- ball doesn't seem to respond as well.

I'm trying to think of original things to say about @MiguelCabrera but I just don't have anymore superlatives.

amazing, that looked like half a swing and he clobbered the crap out of it

Once again, Jose Iglesias showed why the Tigers picked him up at the trade deadline, making a brilliant defensive play in the third inning. He laid out in the hole to grab Austin Romine's hard hit ground ball, then leap to his feet, firing to first for the inning ending out. Victor Martinez helped with a nice pick on the short hop. And yes, Jhonny Peralta doesn't make that play.

For those wondering about Magic Numbers:

Austin Jackson: Slump over? Slump over. Has five extra base hits in two games, 6-for-9 on the series.

Donnie Baseball: Three hits, two RBIs for the most polite man in the game. At this time a year ago, Don Kelly had been DFA'd by the Tigers. A little more than 12 months later, Kelly is having a career year.

Alex Rodriguez: A-Rod never stepped on the field, but remains at the center of the media universe. Consider it Yankees fan karma for all those World Series wins. It's doesn't even things out, but it's a start. 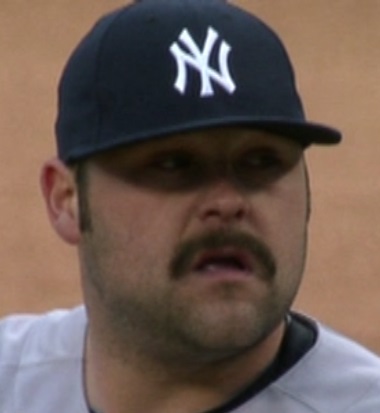 Miguel Cabrera had two hits and three RBIs. But his ninth inning heroics, a two run homer tying the game off Mariano Rivera, made Cabrera an overwhelming PotG with 84% of the vote.