After a weekend of having to deal with the "Welcome Home A-Roid" party, the Tigers head back to the Midwest to face the White Sox on the Southside. Two weeks ago, what seemed like a possibly tight division race has stretched to a comfortable seven-game lead via a run that seemed to start with taking three of four from the pale hose last month.

The White Sox seem to be preparing for the future. After trading Alex Rios for a 12-pack of Lone Star and a tin of Skoal to the Rangers, the Big Donkey now has about as much protection as a French border post sometime around August 1941. While the starting pitching has been decently solid, the offense has been as potent as a bottle of ammonia left under the sink for about 8 years. While any intradivision road series is not easy, the Tigers should be able to easily take two of three from the Flailing Hawks.

As for the beer, we're going a little bit west of the city to another place where people say that they're from Chicago. Two Brothers Brewing Company. Best known for their fantastic Domaine du Page French Country Ale, this brewery has more to offer than just that. The beer for this series is the Revelry Imperial Red. 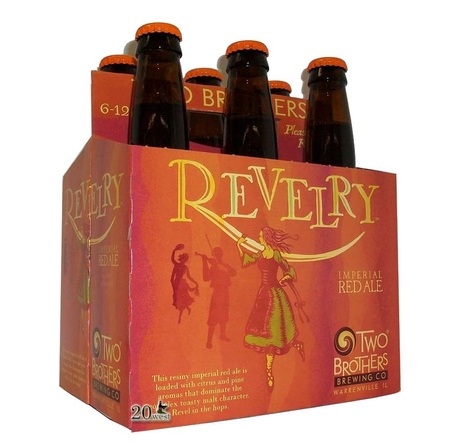 As you can see in the blurb on the six pack holder above, the Revelry is a beer loaded with hops that impart a great citrus aroma to the beer that balances a toasted malt characteristic. The deep amber garnet color leaves a lacy oatmeal-colored head that tracks your progress with each sip. The aggressive hop flavor found at the front of the beer slowly gives way to a subtly sweet roasted nutty malt flavor that finishes clean and pairs very nicely with fruit at a picnic. This beer will leave a mark; at 9.5% ABV and 24 IBUs, you will want to savor this one.