The Tigers are a great organization for many reasons. Here are several more.

Share All sharing options for: A phenomenal fan experience

Editor's note: The following story is from Mike Gentz, a Tigers fan some of you may know from Twitter. After Mike's family suffered a painful loss, some of his friends contacted me to ask for help in setting up a fan experience that would allow them to take a break from life for a day. The team responded in the way we've all come to expect from the Tigers organization: with class and lots of love. I wanted to share it all with our readers and Mike was happy to send me the story of his incredible day last month. Enjoy.  - Allison

I’ve been a Tiger fan all my life, through every up and down the team has had. My cousin T and I grew up cheering for Jason Thompson and Kevin Saucier and Señor Smoke. We didn’t want to see Steve Kemp go but Chet Lemon made us forget about him. We stayed up until the wee hours that morning in April of ’84 as Glenn Abbott gave a Yeoman’s effort in a ﬁve-inning stint that ended with him imploding in the 19th as the Tigers fell to a woeful 16-2 in a loss to the Indians.

In 2002 my wife and I were at Comerica Park when the Tigers ended an 0-11 start with a win over the Rays, as Dmitri Young celebrated the ﬁnal out of the ﬁrst win like it was Game Seven of the World Series. We were in the stands for several games in 2003, as we had the 21-game seat package for a few years. Our boys went to games before they could walk, and while they weren’t able to stay for a full nine innings at ﬁrst, they seemed to enjoy their time there. We went home early once, and Carlos Pena hit a walk-off grand slam. It was then that we decided to show up late instead of leave early for future games. Thankfully, the boys are all about Comerica Park now, so no worries anymore. Last season the boys and I started going to games by ourselves, just the three of us.

I met my wife in 1991. We were married in 1995 and remained together happily until her passing this year. Dawn was diagnosed with melanoma in June of 2009 after a mole on her leg grew. After the initial surgeries and treatments, she was declared clean and remained that way for about two years, and she then she started to have abdominal pain.

It was then that the treatments grew more complex, and for a year she lived in pain and discomfort almost every minute of every day. She did so with strength and grace and she never showed her pain. She rarely broke down, and never broke down in front of people. She found no value in grieving over her diagnosis. Negativity didn’t cure cancer, so why be negative?

Dawn was a baseball fan, and maybe that was only because of how much of a fan I am. We lived together in a crappy apartment back in 1992, the year she adopted the Braves as her team. Sorry, Tiger fans, but she was a Braves fan before she was a Tigers fan. Anyway, one of our ﬁrst arguments centered around me not making enough of an effort to wake her up when Francisco Cabrera drove in Sid Bream in Game Seven of the NLCS. She learned to love the Tigers, though, and we went to probably 100 games together, including the All-Star Game and Home Run Derby in 2005. We were also there when Kenny Rogers beat the Yankees in the ALDS, probably with pine tar on his ﬁngers.

Dawn passed on April 2nd of this year. A small part of me likes to think she waited for that day because it was the usual day-off-after-Opening-Day. I haven’t been the same since.

Shortly after Dawn passed, I received a letter in the mail from the Tigers. It seems several friends of mine got in touch with the team in hopes of doing something special for my boys and I as we coped with Dawn’s passing. The Tigers invited us down as guests of theirs for an upcoming baseball game. I was pretty amazed at this offer and after being so busy with other things, I ﬁnally decided that we would attend the Washington Nationals game on July 30th.

At one point we were asked who my boys’ favorite Tiger was, and they both told me, without hesitation, that it was Alex Avila. I think Avila was hitting about .170 at the time, so my own displeasure at that made me ask them again. They again afﬁrmed that Avila was their Tiger. I’ll get back to that later.

There were four tickets for us with on-ﬁeld passes for Tigers batting practice. We walked down to the ﬁeld and we watched in absolute awe as guys like Prince Fielder and Austin Jackson and Justin Verlander milled about, taking the place of Lance Parrish and Alan Trammell and Lou Whitaker as our new childhood heroes, because T and I were kids again. At one point our attention was called to the scoreboard, which welcomed my boys and I to Comerica Park. 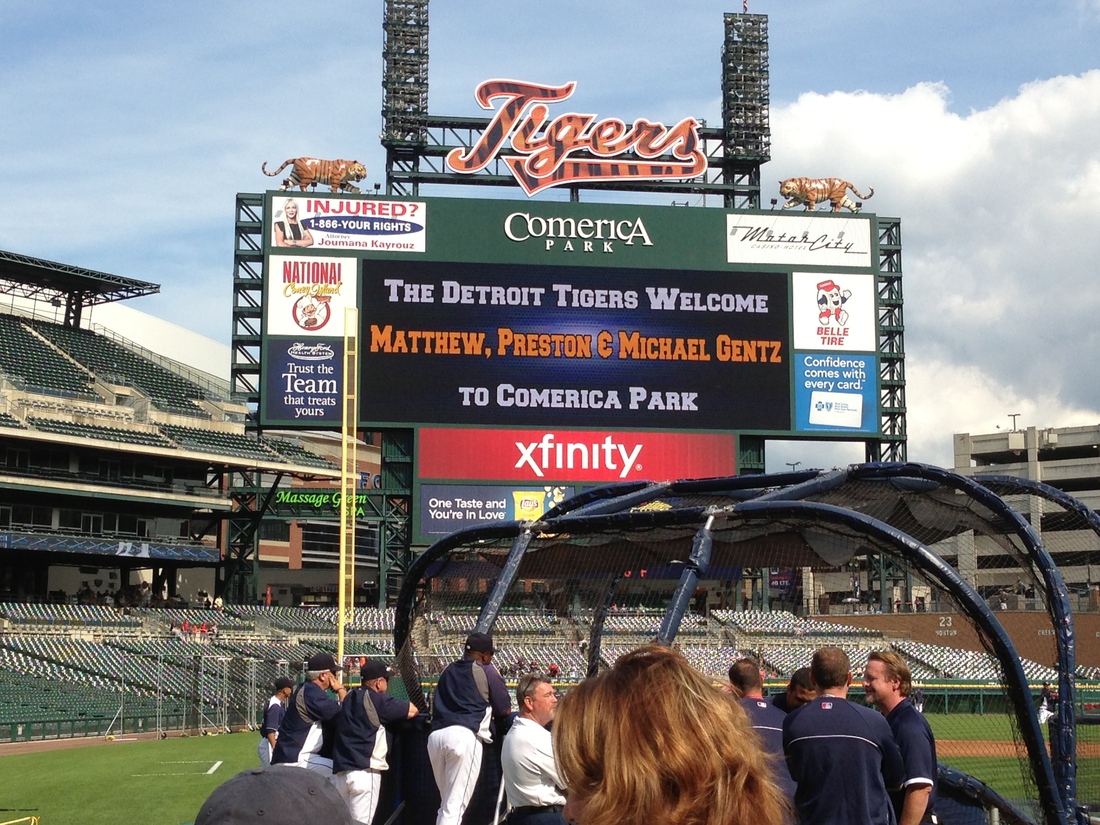 Before long Miguel Cabrera ran by to talk with someone he knew, Jim Leyland came out with his fungo, and even Rod Allen made an appearance around the cages. I will say that it was difﬁcult to not ask Brayan Pena about his nipples. If you don’t understand why, then don’t ask.

We were encouraged us to get autographs and pictures from the players who came close, and the boys ended up with a hat full of autographs from Miguel Cabrera, Torii Hunter, Alex Avila and Matt Tuiasasopo, whose signature I may wash out after Ryan Raburn struck him out. 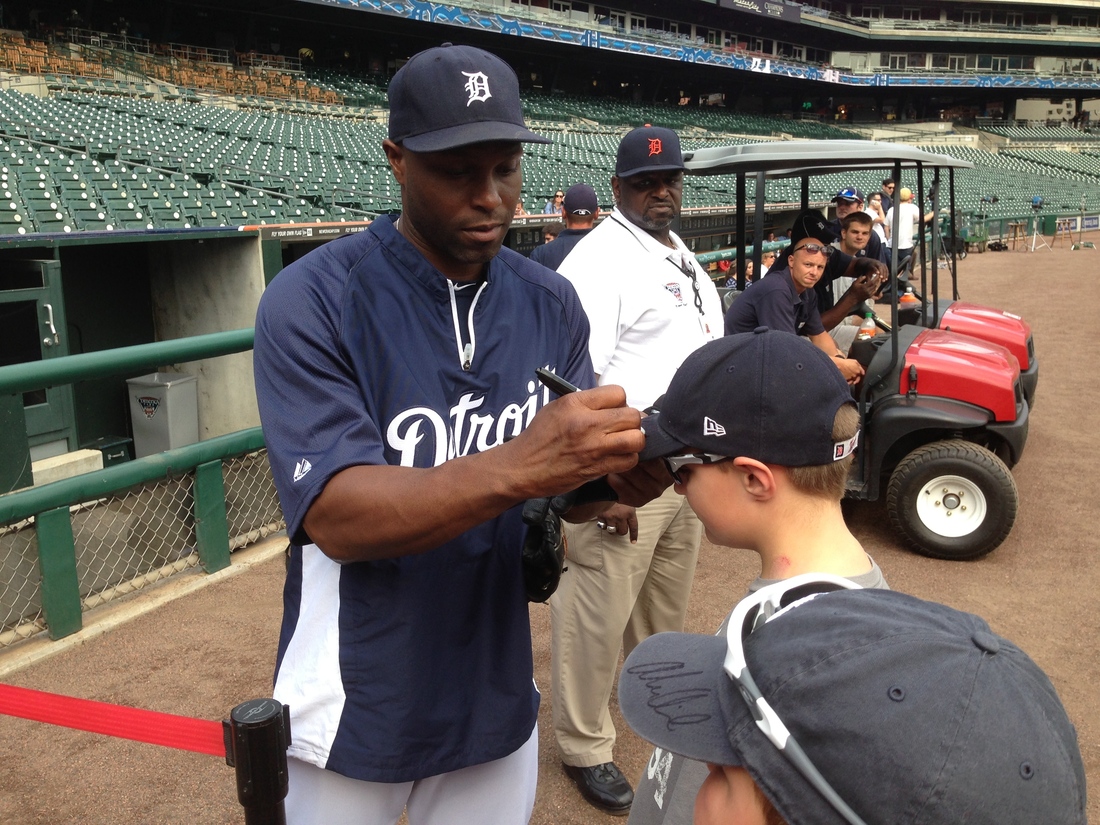 At one point Avila came over to say hi and meet us. We spoke for a moment, he signed the boys’ hats, and took a picture with us. I asked him how many bruises he had, and he laughed and said "Many. Many." His ﬁve o’clock shadow told me it had been probably two hours since he last shaved, and I hesitated to give him some pointers on his swing. The boys were in a daze as Avila walked back toward the cage, and I didn’t think the day could get any better. 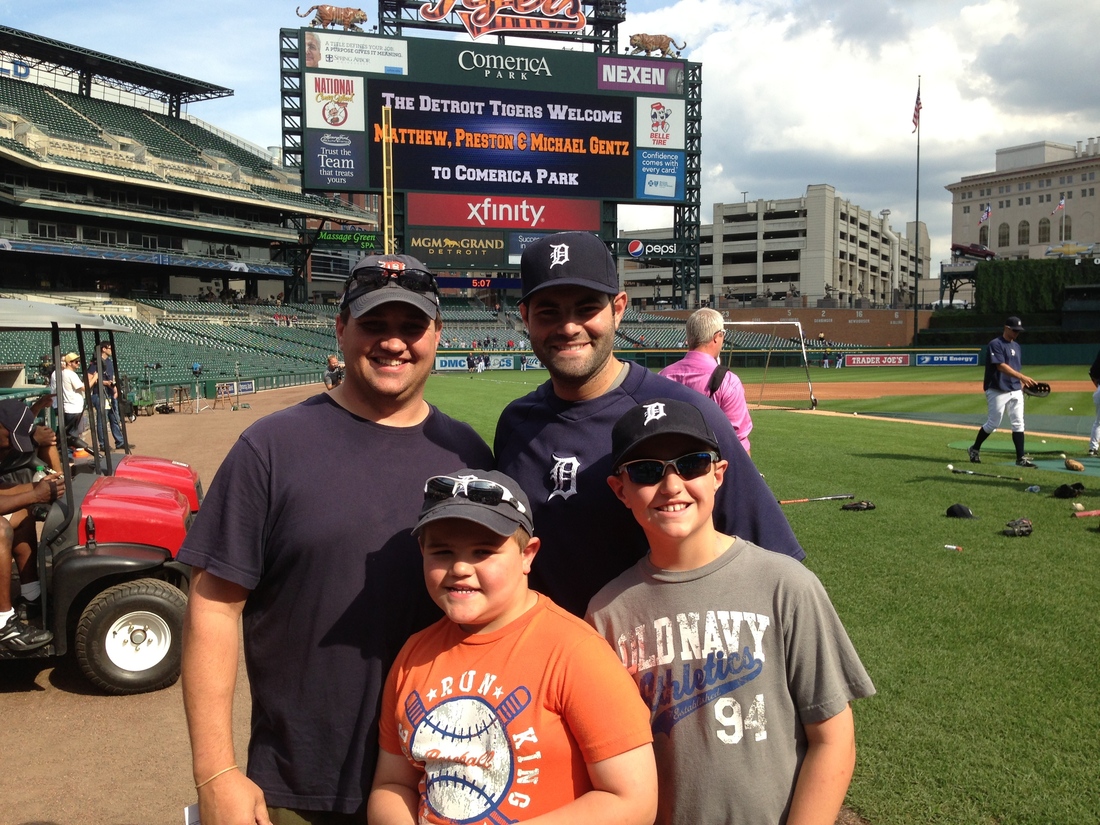 We were asked if we wanted to see Verlander’s MVP and Cy Young Awards, as well as Cabrera’s Triple Crown, and of course we said yes, so we were whisked to the Champion’s Club to take a look. As we walked through the recesses of Comerica Park, we caught Doug Fister texting someone on his phone. He was nice enough to smile for a picture. We also went into the Champions Club where we saw the aforementioned awards as well as the 1968 and 1984 World Series trophies. We learned that the Champions Club used to be nine suites that they opened up into one big suite. At one point, the door opened and in walked Willie Horton. My cousin and I nearly passed out, because for us, Willie Horton is like, well, Alex Avila for my kids. We let Mr. Horton get situated as we explored the room, and as we walked out he was kind enough to sign our scorecards and take a picture. He also talked with us for ﬁve or ten minutes. We wished him well on his recovery from recent surgery, thanked him profusely for giving us the time, and walked out.

We went through the press box and took our seats in the front row of the upper deck behind home plate, stopping ﬁrst for the boys to each get a backpack full of Tigers gear, including posters and bobbleheads and many other items. We sat in our seats in a daze at all we had just been treated to, and time ﬂew as the ﬁrst pitch approached.

As for the game, well, you probably already know the storybook ending. A pitcher’s duel between Anibal Sanchez and Stephen Strasburg came to a head in the sixth, as Andy Dirks struck out with the bases loaded, bringing Alex Avila to the plate. Remember, this is the guy who I tried to talk my boys out of naming as their Tiger, because I was angry at his lack of production this season. Avila absolutely crushed a 2-1 pitch from Strasburg deep in the right ﬁeld seats for his ﬁrst career grand slam, providing the difference in a 5-1 Tigers win.

After the game, my cousin and I decided that we could never attend another baseball game ever. We ﬁgured we should just hang ‘em up after that because there’s nothing that could ever top that day and night. On-ﬁeld BP and Willie Horton and Avila’s grand slam could never be matched, except for maybe a Game Seven World Series win at home. Of course, we’ll be there anytime we can get our hands on tickets, because that’s what we do.

Later, as I relaxed in my hotel room at the Motor City Casino, which the Tigers also arranged, I thought about how lucky I am to have such caring friends in my life, even people I’ve never met in person. Here I was, in the middle of the most difficult year of my life, looking across the city I’ve never been afraid of, toward the ballpark of the team I’ve never fallen out of love with, having just been guests of this same team who I’ve loudly cheered for and criticized all my life. Truly, for me, summer goes as the Tigers go, and it’s always been that way. Now, this summer, which is like none I’ve ever dealt with before, pushed the Tigers to the backseat a bit as I learn how to live this new life of mine. But for one night, they thanked me and they showed me that I am, and their fans are, more than just a seat ﬁller. I can’t thank my friends and the Tigers enough. I only wish Dawn was there to share it with us. I suppose she probably was. 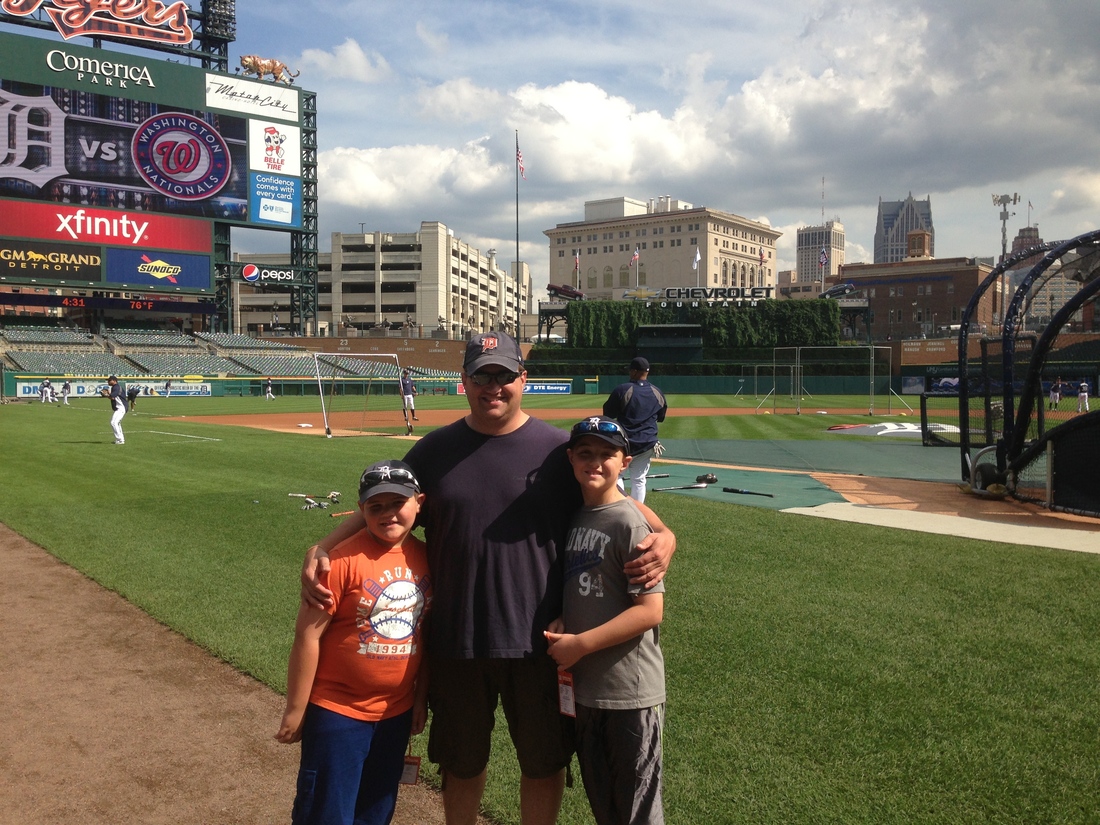 Lastly, I’ll get on my soapbox and leave you with the last words my wife wrote on her blog, and I hope you take this to heart: Check your skin, people. Check your skin.