Wow, 40 beers! I'm glad you all have enjoyed reading these over the past few months. Obviously a few of these beers have been hard to come by for some people, but if you're interested in enjoying a couple of these breweries I've written about plus some other great stuff, there's a really cool event happening in Indianapolis at the end of September.

Sun King Brewery (they of the Indians Victory Lager I wrote about back in May) is hosting a Canvitational on September 28th in downtown Indianapolis with 30 or so breweries from around the US highlighting the positive points of canning microbrews. The festival guests will get a tasting glass and 4-5 hours to enjoy the open air party environment. If anyone is interested, let me know.

Now, back to the baseball. The Kansas City Royals are one of the hottest teams in baseball since the All Star break. Their recent hot spell has launched them back above the .500 mark for the first time in August since 2003 and within 4.5 games of the Wild Card. Their much-panned move to acquire James Shields for Wil Myers combined with the success of Ervin Santana and the recent hot hitting of Eric Hosmer and...oh, who am I kidding, the best move they made all season was finally DFAing Jeff Francoeur.

This is a five-game series with a Doubleheader tomorrow to make up for a rainout in April. With a 7.5 game lead over the Royals, the Tigers cannot fall behind them if the worst case scenario occurs, but I can think of everything better than getting swept by the Royals. Like the Indians series last week, this could be the next step in twisting the knife into the AL Central and asserting dominance. I hope to be celebrating Sunday with a fine ale, and I hope most of you will follow suit.

Brewery Vivant enjoys making Belgium and French style ales harkening back to the land of beer. They are also proud of the fact that they can their products, including this series' offering that was named by a 15 year old: The Big Red Coq. 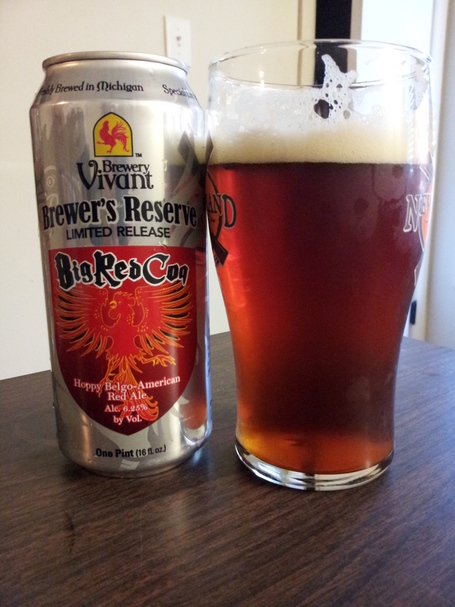 BOTS is on a bit of a red kick right now, and this beer is bright amber in color with a beautiful, creamy golden head. The heavy handed hop character imparts a slight hint of grapefruit and pineapple as well as an earthy pine note whereas the crystal and caramel malts pair up to give the beer the lovely color. The heavy toastiness leaves a lovely cathedral lace on the glass showing your progress, and the versatility of serving pairings from red meat to lighter fare allows a dozen of these to last the weekend. At 6.25% ABV and about 35 IBUs, you'll be set for a great time before school starts.