Where did baseball statistics come from? How useful are they? Who is Bill James and why does he make more money than the gross national product of Serbia? The answers are here. (This statement has not been verified.)

Share All sharing options for: Grunk Very Good: A history of baseball statistics

But baseball statistics have been around for as long as the game itself. On the day that our neanderthal ancestor, Grunk, went out into a field for the very first time and hit a stone with his club, Krag was right there to draw a mark in the dirt.

Another hit, another mark.

All three of them were then eaten by dinosaurs.

Statistics are a numerical way of describing the multiple facets of a player's performance. They provide us with a kind of paint-by-number scheme that ultimately yields a complex portrait of the player in question. We can look at a player's batting average, for example, which tells us that he tends to get a lot of hits, but we can further refine this portrait by looking at his line drive rate, which tells us how much he charges for each line drive. If the period in question is the 1980s, we can also look at the size of a player's mustache to determine how many post-game "parties" he probably went to, if you catch my drift.

For thousands of years, the baseball world was satisfied with a basic collection of standard numbers. A batter would be described by the Triple Crown trifecta of batting average, home runs, and RBI. A pitcher would similarly be described by the trio of wins, strikeouts and ERA. These, as well as a handful of other stats (such as walks, stolen bases, saves, innings pitched, and shoe-size-to-hat-size ratio), were then printed and distributed on millions of baseball cards across the country by companies such as Topps (Motto: "We're horrible at spelling") and Donruss (Motto: "These card designs are going to look hilariously dated in about 10 years").

But then someone realized that these numbers were turning the little stick of gum inside the card packs into tiny, inedible slices of pink, powder-covered brick that could potentially be used as a lethal weapon. No, seriously, if you are fortunate enough never to have experienced these joyless little wafers, consider yourself lucky. They would immediately shatter into a thousand shard-like pieces as soon as you bit into them, and, after much furious and concentrated chewing, they would instantly turn into a rock-solid pebble approximately the size of a gnat, but with less flavor.

(Fun facts about Topps which are actually true: 1) it was originally founded under the name "American Leaf Tobacco," which explains why some people are addicted to eating the cards; 2) believe it or not, its original reason for existence was to manufacture gum; and 3) apart from the baseball cards, probably the company's most instantly identifiable product is Bazooka bubblegum -- which is just as horrifying an invention as what they put in the card packs, and equally unrecognizable as belonging to any class of "gum" known to science.)

And so, because these standard baseball statistics were clearly ruining the baseball card gum, it soon became necessary to create a new set of statistics that would be so inaccessible, complicated, and incomprehensible, that a confused public would simply walk away scratching their heads, having forgotten all about the so-called gum.

Thankfully, by this time someone had already invented Bill James, a half-cyborg who, as far as I can tell, actually sees the world around him like this:

Bill James, a man of such shattering genius that he literally graduated from college without even knowing it (look it up, it's true), started publishing his new-fangled methods of slicing and dicing baseball statistics right about the same time that Rollie Fingers' mustache broke several federal laws against excessive ridiculousness. No one was particularly interested in his work initially, so he eventually self-published his Baseball Abstract, presumably from the dark confines of his mother's basement and between readings of Harry Potter and Magic: The Gathering tournaments. (I'm only kidding! Harry Potter wasn't around yet.)

James' basic working hypothesis seems to have been: "Your standard baseball numbers don't tell a truly meaningful story, so I will create a bajillion new formulas and calculations that make it even less possible to tell a meaningful story. Also, it's quite possible that I am high as a kite from overdosing on Topps gum."

And so James did just that, continuing to publish his annual Abstract until, finally, Brad Pitt showed up at his front door and promised to star in Moneyball if he would stop writing these books. James was later hired by the Boston Red Sox and commissioned with the task of creating a formula that would explain the relationship between winning games and monstrously over-grown beards.

The result is that we now know that no single baseball player can ever again be judged as objectively "good" or "bad," as our neanderthal ancestors mistakenly thought. Johnny Slidepiece might have won 35 games last year, but where our unenlightened forefathers might have concluded from this that, "hey now, that kid can pitch!", we will point to his 9.89 ERA as proof that, "no, he's terrible, his team just scores a lot of runs for him." And then a dissenting group will form, pointing to his much lower FIP, xFIP, and -- for consenting adults -- his xxxFIP, and conclude, "He just has terrible defense behind him." Finally, another dissenting group will form and loudly argue, with great passion and fervor, that, "Not selling beer after the seventh inning is the stupidest rule in the history of America -- speaking of, I'm dry, grab me another one, wouldja?"

Perhaps what is most amazing to me is that Bill James did all this in the 1970s. For those of you reading this who are too young to remember Buckner's bobble, The Cosby Show, or the musical group Ace of Base, let me explain: Bill James didn't have the Internet. He didn't even have a desktop computer, let alone a personal laptop with Excel loaded on it. He had to calculate, generate and record his stats the old fashioned way, by reading baseball cards, box scores, and writing it all down with paper and pencil.

Younger readers, please refer to the explanatory graphic below: 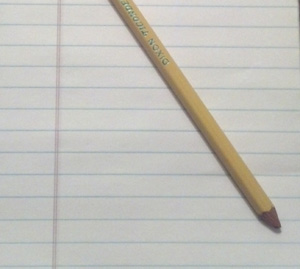 Because of James' near-obsessive determination to find new mathematical ways of making players less culpable for their careers ("Whiffenmiss is NOT a bad hitter, look at his ridiculously low BABIP!"), we now can measure a player according to his:

Whatever your personal preference and feeling towards basic statistics, advanced statistics, sabermetrics, "old school" statistics, Bill James, or even numbers in general, there is one thing I think we can all agree on: statistics was the subject of this post, and therefore, statistics are responsible for either improving or wasting the last several minutes of your life.

And this, perhaps, is the surprise punchline of this history lesson: Krag made a mark in the dirt when Grunk hit the stone ... because Krag was a sports writer.