It's time to bring up Nick Castellanos

Let's see if Nick is ready to play every day at the big league level. The risk is worth the reward. Make sure to temper your expectations, though.

Share All sharing options for: It's time to bring up Nick Castellanos

I'm seeing a lot of talk in the Tigers' internet universe about bringing up Nick Castellanos. The problem is that a lot of the people opining for this call up are doing so for the wrong reasons. The common themes are: Nick Castellanos is the best LF option right now. Nick is going to mash for the Tigers. Nick's defense really isn't that bad. The Tigers window is NOW! I don't care about Nick's development.

1) Nick Castellanos may not improve upon the platoon that the Tigers are using this season.

2) It's by no means a foregone conclusion that Nick comes up and hits like Wil Myers or Yasiel Puig. He's got a .780 OPS in AAA. For ~100 AB's this year, I'd be shocked if he did better than that number.

3) His defense is a downgrade on the current platoon's defense by a rather sizable margin.

Let's get this out of the way. Nick Castellanos is the best prospect the Tigers have. In fact, he may be the best pure hitter in the minor leagues at this time (Oscar Tavares is hurt, Yelich and Rendon have been called up to their respective big league teams). People have long been asking me on @tigersprospects and screaming since May "CALL HIM UP!!!!".

If Castellanos comes up, he's going to take someone's spot. In fact, it will end up being two player's spots. The Tigers are making no bones about it; when Nick comes up, he's playing every day. Currently manning LF is the platoon of Andy Dirks, Matt Tuiasosopo, and a sprinkling of Don Kelly. What exactly would Nick have to improve upon in order to help the Tigers this season? Looking strictly at the numbers, the Tigers LF platoon has produced a .262/.333/.395 triple slash, for a .729 OPS. In case you're wondering, that's an OPS+ of 98, meaning that the Tigers are essentially league average when it comes to LF hitting. Not only that, but with Dirks and Kelly playing most of the LF innings, around 3/4 to be exact, the defense is pretty good out there. It averages out as a tick above average, maybe even plus.

It's impossible to predict what Castellanos' numbers would look like over a 100 PA sample, or the next 6 weeks. The sample is far too small. If he has a good game or two, it could completely distort the overall outcome. However, it's hard for me to believe that when you add in his below average defense, he'd come out ahead of the platoon on an every day basis. Remember, too, Nick still has holes in his game, and in his swing. Post all star break, he's hitting just .250/.317/.389, which isn't very good at the AAA level.

However, Nick is still a sensational hitter. Let's take a look at his spray chart, courtesy of mlbfarm.com. I have narrowed it down to only hits, because it makes the chart easier to read. As you can see, Nick sprays the ball all over the field. 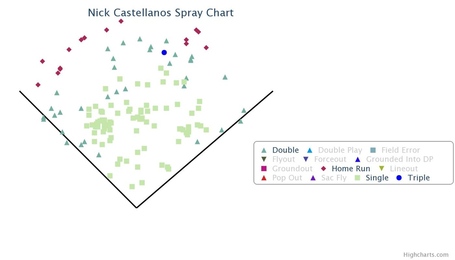 Even if I take away Nick's singles, you can see that he has power to all fields. By my count, 21 of Nick's 51 extra base hits this year have gone to the right side of second base. That's a sign of an advanced hitter. You can also click both charts to embiggen. 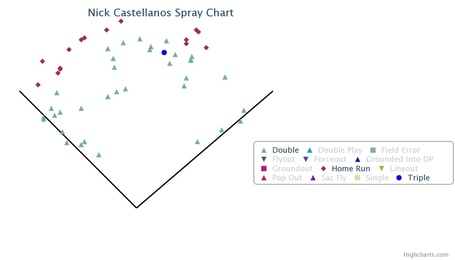 At the very least, I'd like to see Castellanos' bat eligible for the playoff roster. It's not necessarily imperative that the organization brings him up before August 31 to do so, because of some 60 day DL questions that are still lingering, but I'd rather just get all of that funny business out of the way, and bring him up. It's not like Toledo is in the playoff hunt. At the very least, he can pinch hit, and be the extra bat off the bench. The Tigers will have 14 position players and 11 pitches in the playoffs, and the fantasy of bringing Jhonny Peralta back to be that extra bat is just that, a fantasy.

Nick could lengthen the order down the stretch, as well. If you're looking at a batting order of Jackson, Hunter, Cabrera, Fielder, Martinez, Castellanos, Infante, Avila, and Iglesias, that's pretty impressive. Also, since the all star break, Dirks is hitting .257/.350/.357, and Matt Tuiasosopo .174/.269/.239. The LF platoon is hitting a wall, and Castellanos could certainly improve on those numbers, although not necessarily the full season ones.

I'm also interested in letting Nick become accustomed to the big league lifestyle, day in and day out. Even if he struggles. At this point, the Tigers are 5 games up on Cleveland, and a relative lock for a playoff spot. The difference between Nick playing this season and not playing this season won't have much impact on the Tigers making the playoffs or not. However, it's a development thing. I want to see him make adjustments at bat to at bat,  game to game, and week to week. I want him to talk to the dearth of professional hitters about their approach, and the grind of playing every single day. If Castellanos is going to be the every day LF in 2014, which seems like the plan at this point, why not give him 75-100 PA and a taste of the playoffs? In my opinion anyway, that would be good for his development.

After all, the goal of entire player development process is getting the player ready to succeed at the highest level. Nick has accrued 1730 minor league PA. That's on the lower side of the spectrum, but he's also a legit talent. Like I said before, he may be the most talented hitter in the minors. Even if it negligibly hurts the team a bit this season, a Castellanos call up could help his development, and give him a greater chance to succeed as an every day player going forward.

Last reminder. Be realistic with expectations. He's a 21 year old kid who's got a .785 OPS in AAA. He's going to look overmatched at the plate at times. His defense is going to be erratic. He may make a base running mistake or two. All of that aside, his hit tool is second to none in the minor leagues right now. His bat to ball skills are off the charts. He barrels opposing pitching with absurd frequency. However, he's not a finished product by any means. Don't expect Nick to be the savior. Appreciate him for what he is.