Two amazing pitchers, one exciting matchup, and (practically) zero people are able to watch. Yes, the Tigers and Mets have been relegated to second-class status on FOX this afternoon.

Share All sharing options for: Game 129 Preview: Tigers at Mets

I waxed poetic about Harvey before the All-Star Game this year and Harvey didn't disappoint, striking out three in two scoreless innings. In most seasons, his gaudy numbers would be a shoo-in for the Cy Young award. This year? Clayton Kershaw, Destroyer of All Worlds, has other thoughts. Still, Harvey's numbers are impressive. His 6.03 strikeout-to-walk ratio is second in all of baseball and his .196 opposing batting average is fifth (Scherzer is fourth). Want more advanced stats? Fangraphs has you covered.

In his six starts since the All-Star Game, Harvey has somehow gotten better. He is allowing a 1.94 ERA and has 40 strikeouts to just three walks in 41 2/3 innings. He hasn't allowed a run at home since July 3rd, and hasn't allowed a home run anywhere since July 8th. In fact, Harvey's 0.37 home runs allowed per nine innings is the best rate in baseball.

Of course, that home run rate is slightly aided by Citi Field being a very pitcher-friendly environment. Harvey seems to have enjoyed his time there, going 4-2 with a 1.83 ERA in 13 home starts this year. He pitched the first shutout of his career in his last home start, holding the Colorado Rockies to four hits in an efficient 106 pitches.

On that same token, Scherzer has been dominant on the road this season. He is 7-0 with a 2.29 ERA and 0.81 WHIP in 12 starts away from Comerica Park this year. His strikeout rate has dipped to a pedestrian 6.96 per nine innings in the second half. Judging by his 1.69 ERA since he last pitched at Citi Field, it doesn't seem to be affecting his overall performance. 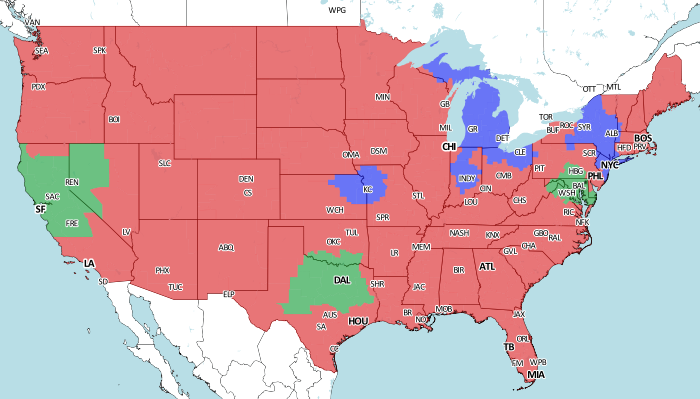 The blue is this game, the red is the Dodgers vs. Red Sox game, and the green is me tearing my hair out listening to Mitch Williams talk about baseball for three hours.

If an amazing pitcher's duel occurs but no one can see it due to horrible blackout rules, did it really happen? That might be the question we're asking after today's game, as neither pitcher has shown much vulnerability this season. I don't think we will see a repeat of Scherzer's matchup with Felix Hernandez in April, but I don't think we will be far off either.