Justin Verlander and Tommy Milone will face off tonight as the Tigers and A's continue their four game series at Comerica Park.

Share All sharing options for: Game 132 Preview: Athletics at Tigers

Milone has held the Tigers in check in his brief career, allowing five earned runs in 17 2/3 innings. This includes Game 2 of last season's ALDS in which Milone allowed a single run in six innings of work, striking out six. He did not face the Tigers earlier this season when the two teams met up in Oakland. It should come to no one's surprise that Miguel Cabrera has four hits (including two doubles) in eight at-bats against Milone.

This season, Milone has fallen off of last year's pace. His ERA and FIP are both over a half-run higher than their respective 2012 values. This seems to be largely due to an elevated home run rate. Milone has already given up 23 home runs this season after allowing 24 last year. His walk rate is also higher, but his WHIP has hardly budged from 2012 to 2013. He is still stranding a healthy 72.6% of runners, almost identical to last year's 73.6% figure.

Milone has only made four starts in the second half, allowing a 4.64 ERA in 21 1/3 innings. He was optioned to Triple-A Sacramento earlier this month in favor of reliever Evan Scribner. Milone made two starts at Triple-A and allowed five runs (two earned) in 10 1/3 innings while striking out 15. While the option seemed premeditated -- the A's didn't need a fifth starter at the time -- the fact that he allowed six runs in four innings to the Rangers before being sent down probably had something to do with the move.

Despite seemingly everyone being frustrated with Verlander, you have to like his odds of bouncing back tonight. He is 8-5 with a 2.32 ERA and 1.12 WHIP against the A's with 88 strikeouts in 93 career innings. He pitched well against the A's earlier this season, allowing just one run on three hits in six innings. The A's, however, did a good job of fouling off pitches to drive Verlander's pitch count skyward. 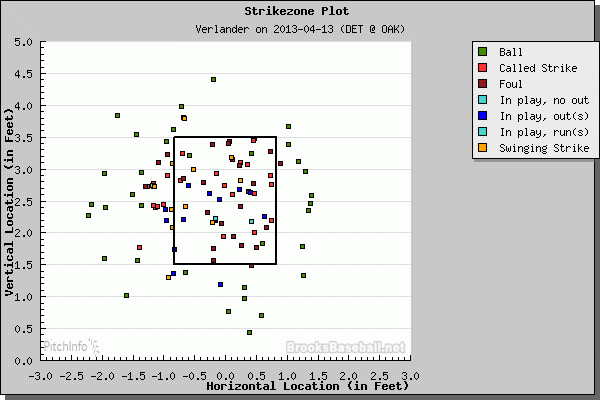 This didn't stop him from generating 11 whiffs on 111 pitches, right in line with his season average of 10.0%.

Games like last night's bullpen implosion have become few and far between in recent months, especially with how well the starters have pitched. Despite this, had the offense not left the bases loaded twice against the A's bullpen, we could still be talking about a win. While A.J. Griffin's poor start was predictable given how the Tigers battered him last season, Milone's could go either way. Here's one thing I do know: If I'm Bob Melvin, I walk Cabrera every time he steps into the batter's box tonight.

Milone stifles the Tigers while Verlander struggles, sending the Tigers fanbase into a full-blown panic.